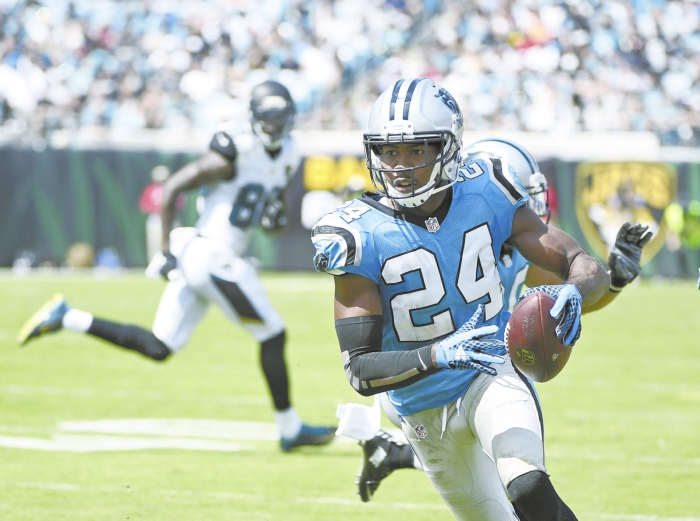 FILE - In this Sunday, Sept. 13, 2015 file photo, Carolina Panthers cornerback Josh Norman (24) runs back an interception against the Jacksonville Jaguars for a 30-yard touchdown. The Carolina Panthers made Norman a free agent on Wednesday by pulling back the franchise tag.(AP Photo/Phelan M. Ebenhack, File)

At first glance, I don’t like it. The Panthers will have to prove to me that this is going to work, because you rarely get better as a football team by letting one of your best players leave with no compensation. General manager Dave Gettleman has said many times he is not in the business of developing young stars just so they can go play for other teams, but that’s what is happening here.

I will say this, though: Norman wants too much money.

Because of the limited number of plays even the best cornerbacks can make because they are stuck on one side of the field, the $16 million or so a year that Norman reportedly wants so he can become one of the highest-paid at his position is way more than the Panthers should spend. Middle linebacker Luke Kuechly, after all, impacts far more plays on defense and will continue to do so while averaging $12.4 million per year after his recent contract extension.

Gettleman doesn’t like to spend much money in the defensive secondary, believing that the front seven is more important. He also let Captain Munnerlyn and Mike Mitchell walk after they got too expensive for Carolina’s blood, and it is hard to argue the logic when you see those three straight NFC South championships.

But I am going to argue it some. Could the Panthers not have kept Norman around for one more season at $13.95 million as their “franchise” player? Norman would have had no other good financial choice except to take that deal. This would have been much like what Carolina did with Julius Peppers once upon a time, renting him for roughly a million a game for all of 2009.

Of course, that didn’t work out that well, and Greg Hardy’s franchise tag was a monetary disaster. So the Panthers decided to cut ties right now on Norman, knowing that it would probably happen in a year anyway. In the process, they gave the Carolinas a new breakup line: “Sorry, Clara, it’s just not working out. I’m rescinding my franchise tag on you.”

Said Gettleman in a statement provided by the Panthers: “After a number of conversations with Josh’s agent, we realized that a long-term deal was not attainable. We have decided to rescind the franchise tag, freeing Josh to immediately become a UFA. We thank Josh for all his contributions and truly wish him well.”

Norman’s contributions to the Panthers’ 17-2 Super Bowl season in 2015 were significant and entertaining. He was commonly regarded as the No. 1 cornerback in the NFL last year, when he had four interceptions (two returned for touchdowns). He also fought with Cam Newton in training camp (they quickly made up) and made Odell Beckham temporarily lose his mind (they never did).

I think the chance Norman finds enough money to go elsewhere is about 95 percent. I hold out little hope that he’s coming back a la Charles Johnson. Somebody more desperate than Carolina is going to spend big to get “J-No,” and I’m sure he will play well there.

But it’s a shame a compromise couldn’t have been reached and this marriage couldn’t be saved, for this is the bottom line: The Panthers with Norman are simply a better team than they are without him.