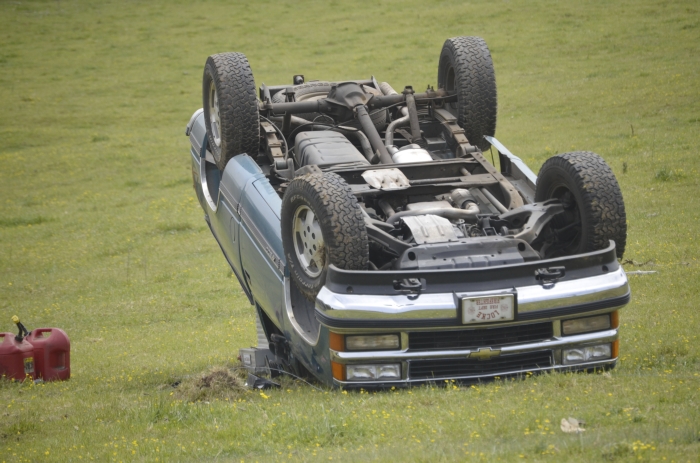 Locke firefighter, Raymond Crouse walked away from this single-vehicle crash Wednesday on Mooresville Road. He ran off the road, overcorrected and lost control of his Chevrolet Silverado. He struck a ditch and overturned. A passerby who happened to be a medic helped him get out of the pickup. Shavonne Walker/Salisbury Post

SALISBURY — A Salisbury man received minor injuries following a single-vehicle crash Wednesday afternoon in the 5100 block of Mooresville Road when his pickup overturned and he had to be freed from the vehicle.

Raymond Lee Crouse, 60, of Goodnight Road, had some scratches on his arm but managed to walk away from the crash. He was still shaken up and declined to comment.

Trooper K.G. Barringer said Crouse was heading west on Mooresville Road/U.S. 150 when he ran off the road, overcorrected, and lost control of the Chevrolet Silverado.

The pickup ran off the left side of the road, hit a ditch and overturned. The truck came to rest on its roof in a cow field and Crouse was unable to get out on his own. A passerby, who happened to be a medic, was able to help Crouse, who is a volunteer firefighter with Locke Fire Department, out of the truck.

Crouse was not charged. In addition to the Highway Patrol, Locke Fire Department, Rowan EMS responded. Rowan County Sheriff’s deputies directed traffic while the vehicle was righted and emergency personnel cleared the roadway.

Citizens search for stars during ‘Shots Fired’ filming at…