Hornets finds themselves in series hole 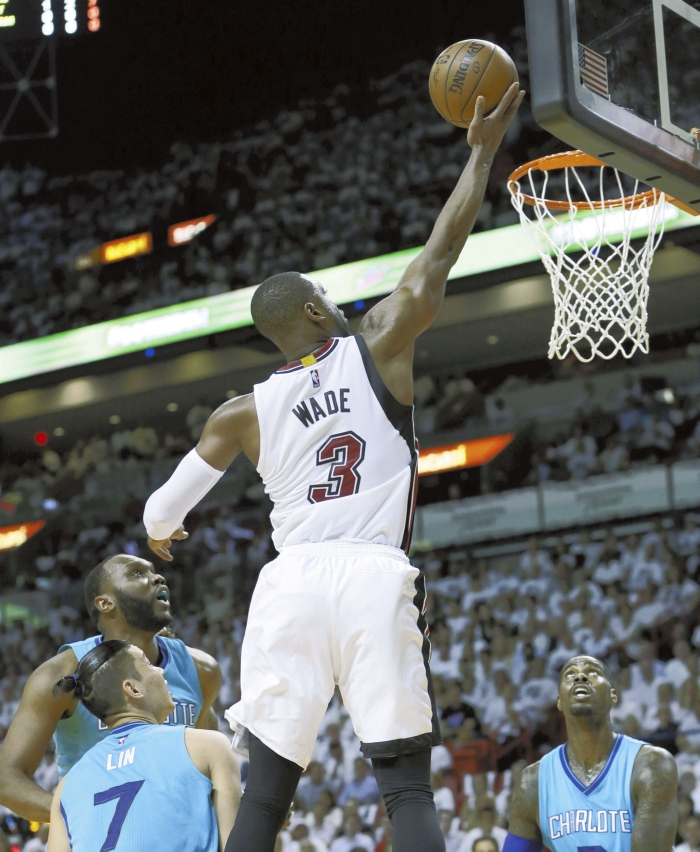 Miami Heat guard Dwyane Wade (3) goes to the basket against the Charlotte Hornets during the first half of Game 2 of a first-round NBA basketball playoff series, Wednesday, April 20, 2016, in Miami. (AP Photo/Alan Diaz)

MIAMI (AP) — Dwyane Wade did not see an offensive outburst like what the Miami Heat have put up in their first two playoff games coming, nor is he counting on it continuing.

For now, he’s just enjoying it.

Wade scored 28 points, Hassan Whiteside was a franchise playoff-record 8 for 8 from the field and finished with 17 points, and the Heat beat the Charlotte Hornets 115-103 on Wednesday night to take a 2-0 lead in the Eastern Conference first-round series.

The Heat have averaged 119 points in the first two games of the series, which shifts to Charlotte for Game 3 on Saturday night.

Goran Dragic scored 18 points, Luol Deng finished with 16 and Josh Richardson added 15 for Miami, which had 72 points by halftime and never trailed in the second half. Whiteside added 13 rebounds and is now shooting 17 for 19 in the series, his playoff debut.

“As we move on to Charlotte, we can’t just bank on our offense,” Heat coach Erik Spoelstra said.

Kemba Walker scored 29 for Charlotte, needing 29 shots to get there. Al Jefferson had 25 on 12-for-17 shooting off the bench, Courtney Lee added 12 and Jeremy Lin had 11 for Charlotte — which has dropped 12 straight postseason contests.

“That’s the reality of playoff basketball,” Hornets coach Steve Clifford said. “We go home, we’re good at home. I feel like we played better today than we did three days ago.”

The game was tied midway through the second quarter, and that’s when Miami took off.

The Heat closed a record-setting half with 10 consecutive made shots — eight of them jumpers, four of them 3-pointers — to score a staggering 23 points in 3 1/2 minutes on the way to building a 72-60 lead by intermission.

“We played a great half,” Jefferson said, “up to that moment.”

Miami missed three shots in 12 second-quarter minutes. Charlotte missed six shots in 12 third-quarter seconds. Strange but true: The Hornets went 0 for 6 on the opening possession of the second half.

Marvin Williams — who shot 0 for 10 on the night — missed a jumper to start the sequence, and then he and Cody Zeller went on a run of something resembling failed volleyball. Zeller missed a putback. Williams then got three offensive rebounds and missed three consecutive shots, and Zeller somehow missed another tip before the Heat finally corralled the rebound.

Hornets: Nic Batum left with 10:43 remaining after spraining his left ankle, heading straight to the locker room for examination and was quickly ruled out for the rest of the night. Clifford said he was “very” concerned about Batum going forward, and Jefferson said he doesn’t expect Batum to return to the series. … Charlotte allowed two 40-point quarters in the entire regular season. The Hornets gave up two 40-pointers in the first six quarters of this series, 41 in the first on Sunday and 43 in the second on Wednesday. … Charlotte was 1 for 16 on 3s.

The teams were tied at 29 after the first quarter, and they took wildly different paths to that number. Miami had nine fouls to Charlotte’s two, the Heat had all six of the turnovers in the period and the Hornets had a 14-1 edge from the free-throw attempts in the opening 12 minutes.

April 20 has been a noteworthy day for Hornets owner Michael Jordan. It was 30 years ago Wednesday that he scored an NBA-playoff-record 63 points against the Boston Celtics, and 20 years to the day that his Chicago Bulls lost against Indiana — the 10th and final defeat they would endure in what was (until Golden State topped it last week) the NBA-record 72-10 season.