The house that disappeared: Trying to save a hidden home 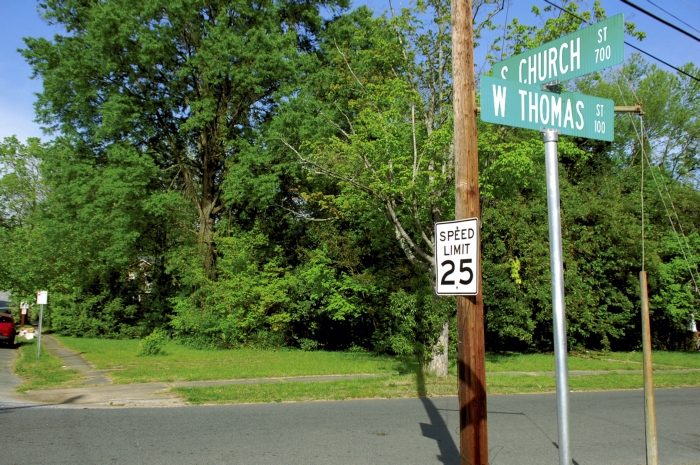 Last seen: At 128 W. Thomas St., on the northeast corner of Thomas and South Church streets.

If located: Look harder, it’s behind the overgrown trees, bushes and vines.

For years now, vegetation, including almost a forest of bamboo trees, has been steadily hiding from view the once-proud McCanless-Busby-Thompson House at 128 W. Thomas St.

You can walk or drive by and not even know it’s there.

Once you get past the foliage and see the house, the news is not good. It’s especially dangerous and should be avoided in back, where the middle of the rear wall is caving in because of water damage from the open roof.

The first-floor ceiling in the rear is barely being held up. The sunroof porch is largely gone. Inside, rooms are littered with debris 2 to 3 feet deep — stuff that would make a good episode on “Hoarders.”

City code enforcement has tagged the house for demolition. Because the house is in the West Square Historic District, the proposed demolition went before the Historic Preservation Commission in March.

At that meeting, representatives from Historic Salisbury Foundation asked the commission to put a 90-day stay on the house’s demise in hopes the foundation could facilitate a rescue.

“We’re doing this under the thinking that someone may want it,” HSF Executive Director Karen Hobson said on a visit to the house this week.

She was joined by Don Conner and Anne Lyles, both of whom are HSF trustees and members of the real estate committee.

“We just wanted to look at it and revisit it, to see if there’s any solution,” Lyles said.

Saving the house, Conner said, would take a buyer with resolve and some construction savvy. To make it financially doable, the purchaser probably would have to live in the house after it was restored.

“It could be a beautiful home,” Conner said.

John M. Cheek, owner of the property, has given the foundation permission to look for an answer, an option other than demolition. But the clock is clearly ticking.

The McCanless-Busby-Thompson House derives its name from the home’s first three owners.

Charles McCanless, son of Napoleon Bonaparte McCanless. built this Colonial Revival house in 1922 when he was an accountant at the Newton Mill Co.

Attorney J.C. Busby purchased the house by 1929. He died in the 1930s, but his widow, Florence, lived at the address into the 1940s before selling it to Emmet Thompson. Subsequent owners were Dr. Edward R. Spicer and his wife, followed by Cheek in 1982.

It’s considered a “contributing” house in the West Square Historic District, which is part of the National Register of Historic Places.

To a preservationist’s eye, the house still has many positives; including its front porch and entrance, unusual patterns in the brickwork and a green ceramic-tiled hip roof.

“An exciting visual effect is created on the facade by the combination of different brick patterns,” a district nomination to the National Register said of the house.

The front parlor has an unusual mantel, a coffered ceiling and a nicely paneled staircase.

The brick walls are intact and in good condition, except for the rear wall. There’s a semi-circle drive bending through a porte-cochere on the house’s west side. Though hidden by vines, the front porch features a tile floor and an arched entrance with beveled glass.

The corner lot is a big one for its neighborhood. The HSF says tax payments are up to date on the property, so there are no liens. On the tax books, it has a total valuation on the land and building of $126,537.

Lyles said the foundation actually investigated the house’s condition before the city moved toward demolition. Former HSF Executive Director Brian Davis went around and through the house with a code enforcement officer, then Davis asked local contractor Chad Vriesema to take a look at the house with him.

From all the input received, Hobson, Conner and Lyles know rescuing the house would be a challenge, but these kinds of saves have been made before.

“It would be wonderful to find a solution,” Liles said.

And wonderful to find the missing house again.