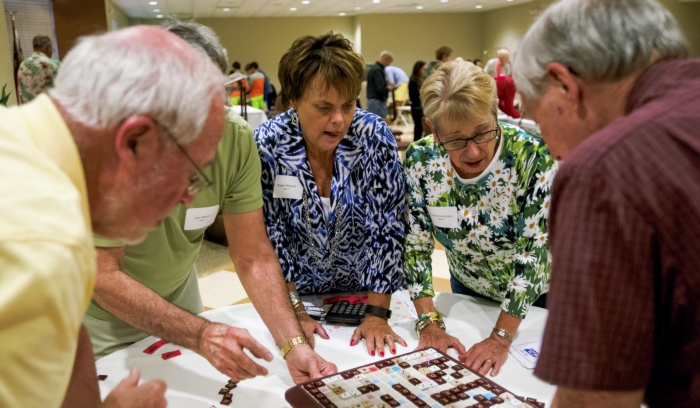 SALISBURY — Tim Campbell leans over a Scrabble board, fitting in an H and an L.

Someone from the other side of the table hands him one, and he places it at the top. The group, previously crowded around the board, leans back to look. “Zoogeographical” takes up an entire edge of the board. It’s connected to “Juxtapositional,” which covers another side.

Campbell and his team are one of several who turned out Tuesday night to play in the Rowan Literacy Council’s Scrabble Scramble at Trinity Oaks senior living community. It’s been a tradition with the council for the last 13 years.

Literacy Council Board President Melody Moxley said the Scramble was a national movement among literacy councils back in the day, but now the Rowan council holds it as their only fundraiser and to have “ a good time with words.”

Last year the fundraiser, along with money the council receives as a United Way agency, helped provide literacy training for 22 adult students and 55 English as a second language students.

Groups can purchase a table for $300, or an individual can play for $30 and be assigned a table – but unlike regular Scrabble, the Scramble is a team sport. Each team is given 100 tiles, a Scrabble board, a starting word and a 15-minute time limit. During the Scramble’s three rounds, they can pay for extra tiles, or to peek in a dictionary – there’s no quick Google search for this tournament.

Some of the tables compete just for fun and to support the council, but others are strategists, playing in earnest.

The Bookworms team was comprised of Catawba College faculty, but members weren’t too sure about their chances of winning.

“We have three English professors, a lawyer, a biologist and a psychologist,” Dr. Sheila Brownlow, chair of Catawba’s psychology department said, “We’re going to lose.”

The reigning champions of the Scrabble Scramble are Trinity Oaks residents, in fact — for one simple reason: practice.

Her team, the Mean Green Scrabble Machine, hoped to upset the Trinity Oaks table, but the champions weren’t just practiced – they were masters of strategy.

“Trinity Oaks told us before they started that they would need 32 Z’s,” Helen Peacock, vice-chair of the Literacy Council confessed.

But for other tables, it was just a night of fun.

The Friends of the Rowan Public Library sponsored a table of teens from the library’s teen club and teen advisory board to attend. Gabrielle Brown, a seventh-grader, said that some of the teens competed last year, but didn’t place well.

“Last year we got last place,” she said.

The kids got into the game, standing up and crowding around the board and offering suggestions for words. Brown, an avid Scrabble fan, said she was proudest of the word “Syzygy.”

“I don’t know exactly what that means,” she said, “but that’s a famous Scrabble move.”

And the players aren’t the only ones learning new words. The table of judges looks up each word on a team’s Scrabble board, using dictionaries to determine if words are valid and spelled correctly.

Witt has been a judge for five or six years, she said. But she runs across words she doesn’t know. She remembers one year a team used the word, “Ai.” Thinking it was an abbreviation, Witt and the other judges looked it up to find that an ai is a type of three-toed sloth.

Sometimes a misspelled word can axe an entire chain of other words.

At the end of the night, the team with the highest cumulative total wins. At the end of the first round, things looked good for the Trinity Oaks team as they pulled more than 1,000 points ahead of the other tables with 2,975.

But win or lose, the important thing was that everyone enjoyed the night.

“They have so much fun,” Peacock said.