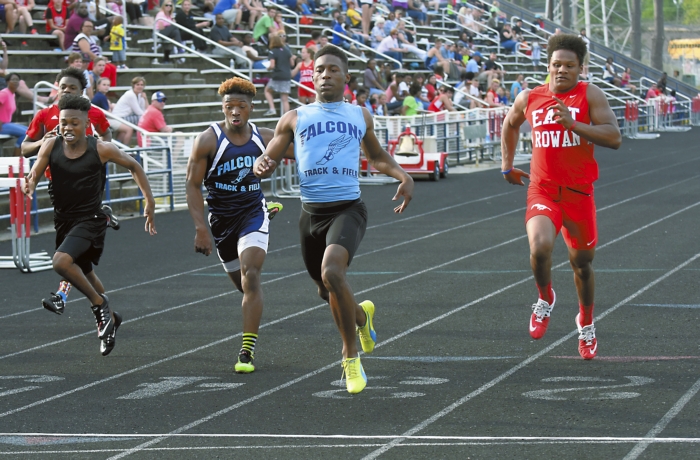 GRANITE QUARRY — Sprints MVP Jaylon “J.T.” Sanders led an onslaught by West Rowan’s boys, and the Falcons rolled to victory in the Rowan County Track and Field Championships on Tuesday.
Tearing up the East Rowan track, West dominated hurdles, amassed the most points in the throws, sprints and relays, and more than held its own in the distance events.
West ended a string of four straight county championships by East Rowan.
“I’ve been around track and field a long time and you’re going to have your good days and your bad days,” West coach Ralph Ellis said. “This was one of our good ones.”
The final tally: West (173), Carson (127), East (115), North (59), Salisbury (44) and South (34).
While the margin of West’s victory was surprising, the victory itself was expected by just about everyone. West hasn’t lost a meet all season.
“We knew we didn’t have anything for West,” Carson coach Robert Marchinko said. “But we played around with the numbers a little bit, and we knew we had a chance to beat out East for second.”
The most exciting race of the day was the 400. Sanders did not get off to a terrific start, and he was sprinting behind East’s Devaniel Dale and Carson’s Nick Cox as they headed toward the final turn.
“I was behind, but I still felt like I was all right,” Sanders said. “Then I kicked it in, and I really hit it. I started gaining on them, and slowly, I passed them. But it was a great race. It was great competition with both of those guys.”
Sanders’ goal was to break 50 seconds. Mission accomplished. He was clocked in 49.97.
It was a draining race that left Cox shaking his head in admiration.
“J.T. is beatable, but he’s the real deal,” Cox said. “He’s just a monster on the track, but he’s also a good guy to run against. He’s humble about his success.”
There was plenty of success on Tuesday for Sanders, who won two gold medals in the state indoor championships in February. Sanders swept the 100, 200 and 400, defending all three county titles.
The difference between this county meet and the one in 2015 for Sanders was that this time he also helped West take the 4×400.
The Falcons got points from all over the field. Juwan Houston and Joel Thomas-Morales went 1-2 in the 110 hurdles. Javon Lofton won the shot put. West also claimed the 4×200 and 4×400 relays.
Cameron Butler won the 800, holding off Carson star Zachary Marchinko. Butler had finished second to East’s Conor Honeycutt in the event in 2015 in 2:03, but this time he broke 2:02.
“Marchinko probably has to be the favorite in any event he’s in, so that was a great win for Cameron,” Ellis said. “That might have been the race of his life.”
Marchinko’s best events are the 1600 and 3200, and he defended his county titles in both. He cruised in the 3200 and ran 4:34 to hold off West’s Andrew Burgess by four seconds in the 1600. Marchinko got his long day started by helping Carson win the 4×800. He repeated as Field Events MVP.
“I thought I did OK,” Marchinko said. “Doing four events, you’re not going to be going for any records, but I was glad to win the 3200 for the fourth straight year, and I helped my team.”
Carson also boasted the field events MVP, as Brenden Westbrook repeated as county long jump champ. Westbrook also won the triple jump for the first time, and he was second in the high jump.
East’s Max Wall had a great meet. He was second to Sanders in the 100 and 200, took second in the triple jump and placed fourth in the long jump.
East got a first from Lee Sharum, who cleared 13 feet in the pole vault. East got 20 points in the pole vault with Jeffrey Burrell taking second and Dustin Humphrey fourth.
North got a first in the discus from Isiah Corpening.
Salisbury got a first from Zaedrian Harris, who edged Westbrook in the high jump with fewer misses. Both leaped 6 feet.
The Hornets’ 4×100 relay team also was a winner.
South’s best performances came in the jumps. Donte Hill was second in the long jump, third in the high jump and fifth in the triple jump.
But it was a day that will be remembered mostly for West ending East’s impressive county streak. The Falcons hope to use the victory as a springboard to bigger and better things.
“It’s great to have some God-given talent, but we’re also putting in the work to improve every day,” Sanders said. “Some people are predicting we’ll win states, but predictions don’t mean much. You still have to go out and do it.”
Ellis agreed with that level-head approach.
Right now, he’s just thinking about what promises to be a tough SPC meet. After that, he’ll worry about regionals and states. But he knows he’s got one heck of a team.
“We could’ve won the indoor state championship if things had gone our way,” Ellis said. “We finished second, but it gave us a taste of success, and now these guys have gotten hungrier.”