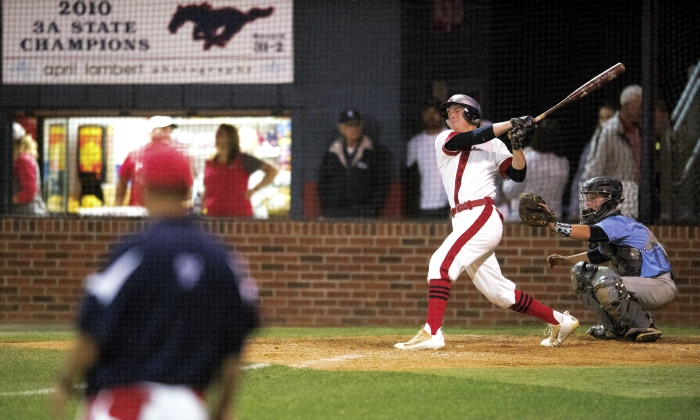 JON C. LAKEY / SALISBURY POST ... East Rowan’s Ike Freeman connects on one of his two hits during last night’s 10-0 win over West Rowan in Granite Quarry. Freeman hit a two-run homer in the first inning as the Mustangs pulled to within one game of the first-place Falcons.

GRANITE QUARRY — At 5-foot-10 and 160 pounds, East Rowan junior John Owen looks like the kid next door who mows your lawn, but there’s some steel in him, and he was more than ready for Wednesday night’s South Piedmont Conference rematch with West Rowan.
“Revenge is a sweet thing,” Owen said, shortly after he and his East Rowan teammates clobbered the Falcons, 10-0, at Staton Field.
Second-place East moved to within a game of West in the SPC standings.
You could make a good argument for Owen as county MVP. He’s started eight times on the mound and East (15-6, 11-4) is 8-0 in those games. Owen threw his sixth complete game against the Falcons (17-4, 12-3) and recorded his fourth shutout.
“We get a lead with John, and he’s always lights-out,” East shortstop Ike Freeman said. “We’ve obviously got a lot of confidence when he pitches.”
Owen’s lone loss came in his only relief outing. East dropped that one, 4-3, at West on a disputed, seventh-inning, bases-loaded walk to Bryan Ketchie, who was, ironically enough, Owen’s mound opponent on Wednesday.
“That game at West was a tough one to lose, but it was my fault for putting those guys on base,” Owen said. “Besides, if you didn’t have crazy games like that, baseball wouldn’t be so much fun.”
East had little fun on Monday when it got trounced, 8-1, by Northwest Cabarrus, but East coach Brian Hightower had no doubt his team would bounce back strong behind Owen.
“I told those guys on the bus on Monday night that they’d just played a really bad game, but I still had all the faith in the world in them,” Hightower said. “They busted it in practice on Tuesday, and I never doubted they’d come to play tonight. I don’t know if we’re as talented as some of the other teams, but I do know no one is going to play harder.”
Ketchie challenged East with fastballs in the bottom of the first, and the Mustangs squared them up. UNC-bound Freeman clocked a two-run homer, his third round-tripper this season.
“I was expecting something off-speed, but he tried to beat me inside with a fastball,” Freeman said. “But I’ve got great respect for Ketchie as a pitcher. My second at-bat, he came inside and that time he beat me.”
The crowd was still buzzing over Freeman’s blast when Owen jumped all over a high fastball, and drove it out to left-center for a 3-0 lead.
“I’m a little guy,” Owen said with a smile. “But that pitch was right where I like it.”
The odd thing about Owen’s shutout is he wasn’t sharp early.
Brandon Walton singled crisply to begin the West second, and East left fielder Chandler Antosek had to make a diving catch in left field to rob the next hitter, Trevor Atwood. That diving catch proved to be the key defensive play.
Then in the West third, Lee Poteat lined into a double play to end another frustrating inning for West.
“We hit balls hard and had our chances in the first few innings,” West coach Seth Graham said. “But with a pitcher like John, you’ve got to get to him early. He settled in about the fourth inning, and when he’s pitching with a lead, he’s going to do his job.”
Hightower and Owen agreed with that assessment.
“I was struggling early, getting into a lot of 2-0 counts, but guys made plays,” Owen said.
Several college coaches were on hand. They watched Owen locate a lot of 82-83 mph fastballs, and his hardest fastball of the night was clocked at 86.
But it’s his curve and change-up that make him special.
“John really wasn’t good early,” Hightower said. “But then he found it, and when a high school kid is throwing three different pitches for strikes, he’s going to be tough to hit.”
East’s four-run fourth broke the game open and knocked out Catawba signee Ketchie. The Falcons’ defense faltered, Trevor Scruggs hammered a double to get things rolling, and Owen drew a walk with the bases loaded.
“We came out hot and kept it going,” Freeman said. “I’m glad we kept hitting. I don’t like the close ones.”
This one wasn’t.
East’s three-run sixth against reliever Olen Stamper brought on the mercy rule. That inning included an opposite-field, two-run double by Jackson Justus and a two-out, walk-off single by Antosek.
“We had some bad pitch selection in that first inning, and East is a team that feeds off momentum,” Graham said. “They played well tonight, and we didn’t. We’re still in first place, but we can’t lay another egg like that. We’ve got to get back to work.”