Byron York: Where is Trump’s outrageousness? 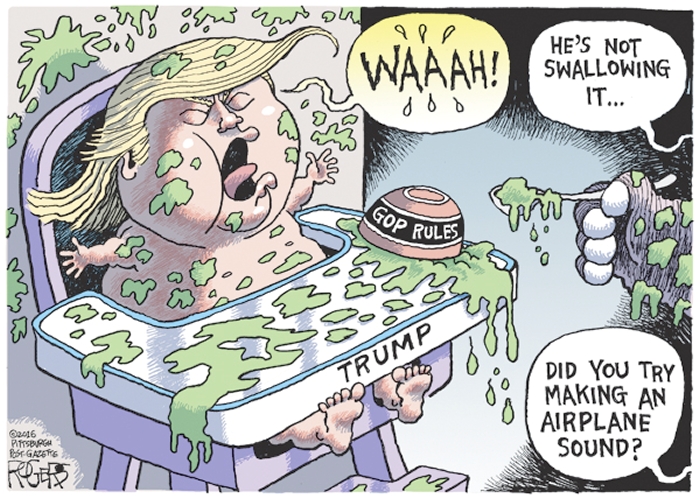 Have you noticed something different about the Trump campaign? It’s been more than two weeks since the last really outrageous thing the Republican front-runner has said or done. In the old days — say, a month ago — Trump would have set off multiple hair-burning controversies in the same period. But now — nothing.

It’s not an accident. When it comes to outrageousness, Donald Trump has dialed it back, on purpose. And indications from Trump world are that the new pattern will continue. (Warning: By the time this article appears, it’s always possible Trump could do or say something so shocking that the campaign is rocked for days.)

Why the change? Ask people knowledgeable about the campaign, and they’ll say the addition of new staff has had a quick effect. Pushed by his children, Trump has expanded his super-tight circle of advisers with the addition of Paul Manafort, and now others, too. The sense is that Trump actually can listen, both to advice on what to say and not to say. The message has evolved; he is a better candidate than the man who messed up right and left just a few weeks ago.

With his latest crusade against “voterless victory,” Trump is scoring points again, not so much against Ted Cruz directly, but against the Republican establishment — always Trump’s most comfortable target. For Trump, Cruz’s vulnerability is not that he is part of the establishment, but that he has gotten in bed with the establishment as the only way to win. So the belief is that Trump’s fight against the Republican National Committee and insider campaign rules pays off everywhere — especially if Trump is not making critical unforced errors at the same time.

To see the changes in the Trump campaign, look at the four-week period between March 22, when Trump began to blow up his own campaign, and now. On the night of March 22, Trump saw a low-budget, anti-Trump Super PAC ad featuring a photo of his wife. He went straight to Twitter. “Lyin’ Ted Cruz just used a picture of Melania from a G.Q. shoot in his ad,” Trump tweeted. “Be careful, Lyin’ Ted, or I will spill the beans on your wife!” Not content to stop there, Trump made things infinitely worse the next night, March 23, when he retweeted a meme from one of his followers that featured a glamour shot of Mrs. Trump next to an unflattering photo of Mrs. Cruz.

It’s a simple rule of politics that you don’t attack your opponent’s wife — or husband, for that matter, unless his name is Bill Clinton. Trump had trampled all over the rule, and the blowback was intense. In the days before the April 5 Wisconsin primary, Trump’s rivals — not just the Cruz campaign but Wisconsin’s formidable conservative talk-radio lineup — used it over and over against Trump.

But Trump was about to make things even worse. During a March 30 interview with MSNBC’s Chris Matthews, Trump said that, were abortion to be banned, there should be “some form of punishment” for women who have abortions. Angering both pro-lifers and pro-choicers, Trump then issued multiple clarifications, and the controversy dragged on for days.

Add to that Trump’s attack on Gov. Scott Walker, and the Trump campaign was done in Wisconsin; Cruz beat Trump 48 percent to 35 percent.

And then something changed. On March 29, as things were falling apart in Wisconsin, Trump announced the hiring of Manafort, the veteran Republican operative. Manafort ostensibly joined to serve as Trump’s convention manager, but his role quickly expanded, in part at the expense of campaign manager Corey Lewandowski, who at the time was facing possible criminal prosecution for a March 8 incident in which he grabbed a female reporter’s arm after a press conference in Florida.

It took Manafort a few days to get up to speed. But since his arrival, Trump has been remarkably outrage-free. He’s still giving the same basic performance in his rallies, but he has been a little more discriminating in his press appearances — two straight weeks without appearing on a Sunday chat show — and has stayed away from doing obviously dumb things, like attacking his opponent’s wife. The campaign hopes the bad period is over.

Now the question is whether Trump has the discipline to stay on a relatively error-free course. He had some very good luck when the GOP primary schedule took him from his disastrous performance in Wisconsin to his best state of all, New York, and then to other friendly northeastern states.

But Trump will need more than luck to suppress the impulses that have gotten him into trouble in the past. He’ll need to be a better candidate.