Hospice ‘not just for patients who are dying’ 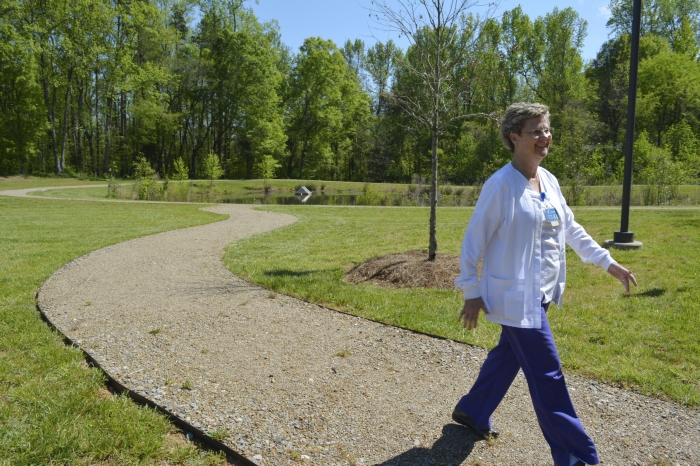 When Edwina Ritchie gets a chance, she often goes for a quick walk on the gravel path behind the Glenn A. Kiser Hospice House. Susan Shinn/For the Salisbury Post

A funny thing happened to Ralph Ketner on the way to the pearly gates.

In mid-March, doctors discovered a mass in Ketner’s colon, which was diagnosed as terminal cancer. Ketner chose not to have invasive surgery to confirm the diagnosis, but instead entered the Glenn A. Kiser Hospice House. With the decisiveness that was the hallmark of his career, the Food Lion founder also chose to go without food or water.

He slept most of two weeks, woke up one morning, and decided that since it was taking so long for him to die, it must not be his time to die. He and his daughter, Linda, decided he would move to assisted living to regain his strength.

At this writing, Ketner is still ill, but the situation is not dire, and he has a plan of care that’s being implemented, his daughter says. Ketner chuckles about the fact that he’s a hospice “graduate.” He and his daughter know, however, that hospice care will be there when they need it.

Ketner’s outcome certainly was rare, say hospice staffers. But hospice is not just for patients who are dying. It is a place they can go to manage their pain and symptoms. It can be used for respite care. In both cases, patients have been diagnosed with a life-limiting illness with which they’re expected to live six months or less. And the vast majority of hospice patients receive care at home, which is where most typically want to be.

Ketner’s original perception of hospice is not unusual, says Ann Gauthreaux, public relations director of Hospice and Palliative Care Center, a 13-county region of which Rowan County is a part. With 14 beds, The Kiser Hospice House is one of two in-patient hospice homes in the region, along with the 40-bed Kate B. Reynolds Hospice House in Winston-Salem.

“People don’t really have a grasp about what hospice is until they have a first-hand experience. The people who get it become our number-one advocates. Testimonials are powerful things.”

“Driving into the grounds, I could see the beauty and the wisdom of the design,” Linda Ketner notes. “The facility is set in the middle of about 10 acres with a pond, and light flows into every room. Most rooms have access to a patio, the halls and rooms are spacious with high ceilings, and all furnishings and colors are elegant and comfortable. Just walking in, you feel peaceful.”

And although he’s well known in the community, says Edwina Ritchie, “Mr. Ketner was just another one of the wonderful patients we have.”

Ritchie is director of the Glenn A. Kiser Hospice House, and said Ketner was treated just like any other patient. Ritchie and the hospice staff helped honor Ketner’s wishes for no visitors and no nutrition, and they also received the endless bouquets of flowers that lined the nurses’ station and sorted “oodles of cards” that Ketner received. Ultimately, he says he received well wishes from more than 1,000 people.

Even though Ketner and his daughter gave permission for Ritchie to discuss his stay at hospice, Ritchie is fiercely protective of hospice patients and their privacy. She said say that Ketner “was just most appreciative of everything we did.”

She notes, “Families have to do what’s right for them. He had some work to do to determine where he was with his illness.”

Ritchie says that although it’s rare, patients at the hospice house have been discharged.

“The message I want to share is for families to think about hospice early in the process of a life-limiting illness,” she says. “You need to understand your options, so when the time is appropriate, you can get the benefit from hospice and your family can get the benefit.”

Hospice is not only for the patient but for his family as well. Linda Ketner learned this during her father’s stay at the Kiser hospice house.

“The Hospice system has spent a great deal of time thinking of the caregiver and anticipating their needs,” she says. “There are family rooms to be used when large groups of family members can be gathered to give information on the status of their dying loved one, make group decisions, wait to take turns in visiting the loved one, be together for support during the final stages of their loved one’s life. And, the family room has a kitchen with hot coffee and snacks provided by volunteers 24/7. There is even a children’s room with toys and books for kids.

“The hospice staff members here in Salisbury were so kind when I had questions, was scared, needed to enforce visitation rules, needed information about a new development in Dad’s care —whatever and whenever I needed help or just kindness, they were there for me and for Dad with what we needed even before we asked. They will have my eternal gratitude and Dad feels the same way.”

One-third of hospice patients receive residential care for 10 days or less. But for patients who have a life-limiting illness, and who enter hospice care at the six-month mark, the quality of life increases and statistically these patients live longer with hospice care, Ritchie says. Their pain and symptoms are better managed, and families receive support and education.

“All of this sooner than later works so much better,” Ritchie says.

Ritchie often goes into the community to meet with physicians and with civic and church groups.

“We do a lot of education in the community,” she says.

She also works to educate physicians about hospice care, because she never wants a physician to say to a patient, “There’s nothing else we can do.”

“Nothing could be further from the truth,” Ritchie says. “There may not be a curative treatment, but there is another plan to care for aggressive symptom management.”

Doctors may not be able to “fix” a patient’s illness, but they can offer palliative options.

Ritchie often refers to the hospice house as a “hospice hospital.”

“We have a plan of care to manage pain control,” she says. “It doesn’t mean you’re here to die. We are a hospice hospital, but we are in a homelike setting.”

Ritchie and her staff work hard to honor families’ wishes. “Some families need quiet time,” she says. “We try to meet families’ needs without being the hospice police.”

She adds, “The patients who look ahead about what they want can avoid that crisis moment about what to do next. Our patients are not afraid of dying. They know they’re dying. They just want to be comfortable until it happens.”

For more information about The Glenn A. Kiser Hospice House and hospice care, contact Edwina Ritchie at 704-603-3900 or edwina.ritchie@hospicecarecenter.org.