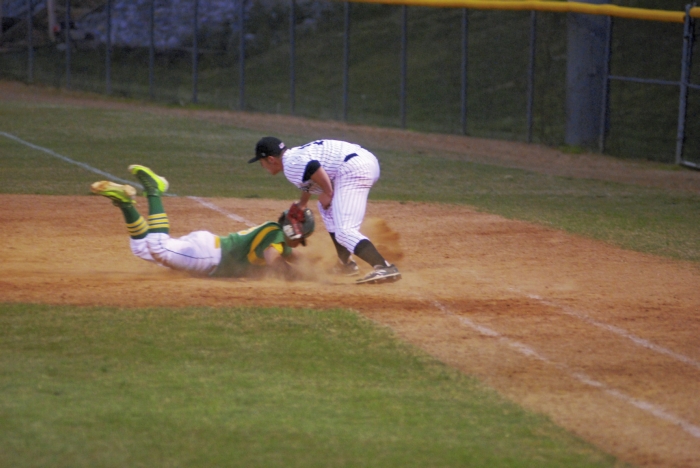 With a chance to tighten its grip on first place, the Hornets were instead administered a dose of Central Carolina Conference tough love and fell, 6-4, to visiting West Davidson.

“I told our guys coming in, ‘If we execute, we win,'” coach Mike Herndon said after Salisbury (10-9, 6-1) dropped into a tie for the league lead with the Green Dragons and North Rowan. “We didn’t execute so, we didn’t win.”

Of course there was more to it than that, but Salisbury stranded 10 base runners — including three in the bottom of the seventh inning. West (17-2, 6-1) prevailed when junior right-hander Chris Mauk fanned the last two Hornets’ batters.

“He dodged several big innings,” winning coach Jason Lemley said, after Mauk worked himself in and out of trouble in each of the last three innings. “But he kept his composure on the mound, tried to stay down in the zone and throw strikes.”

Mauk induced 10 groundouts, improved to 6-0 and out-pitched Salisbury senior Will Steinman, who struggled with his control. The tall right-hander hit six batters, walked four and balked home a run in the top of the sixth inning. He was relieved by Harrison Smith after West’s Jake Simmons coaxed a leadoff walk in the seventh.

“(Steinman) is normally really consistent and very competitive,” said Salisbury catcher Bo Rusher. “He knows how to get batters out. But sometimes, all pitchers face these situations. It gets really difficult.”

Steinman struggled with his command right from the start, when he walked leadoff man Austin Ferguson to open the game. Two batters later, Doulton Anderson doubled home the game’s first run. “His back was to the wall, but he seemed to do a good job getting out of jams,” Lemley said after West earned its fourth straight win.

Salisbury tied the score in the bottom of the second. Smith blistered a leadoff triple to right-center and crossed on John Yang’s groundout. An inning later, the Hornets took their only lead of the night when Griffin Myers walked and eventually scored on Rusher’s two-out, hit-and-run single to center.

“We didn’t do enough of that,” Smith said, after going 2-for-3. “We didn’t execute with men on base and we left a lot of them in scoring position.”

West regained the lead on Austin Gobble’s two-run single to center with two away in the top of the fifth. Again Salisbury responded, this time when Steinman beat out an infield hit that delivered Myers and tied the score, 3-3, after five innings.

The sixth proved decisive. Steinman yielded three base hits, an intentional walk and hit Cason Fowler with the bases loaded. Another run scored on Mauk’s sharp, ground ball single to right and a third when Steinman balked with the sacks full, leaving the Hornets in a 6-3 hole.

Salisbury plated its final run in the last of the sixth on a run-scoring hit by Chandler Lippard. The Hornets had runners on the corners when West second baseman Derrick Hardin knocked down Steinman’s wicked smash up the middle and got an inning-ending force-out at second base — on a bang-bang call.

“Derrick is so quick,” Lemley said. “I thought for sure that ball was through.”

Herndon’s comment on the play: “He got rewarded for a great play,” he said. “But I thought we scored there.”

Salisbury’s final charge up the hill was thwarted after Lippard blooped an RBI-single down the right-field line in the bottom of the seventh. With the bases full, Mauk struck out designated hitter Alex Link and got Myers to swing through a game-ending, 1-2 breaking ball.

Salisbury will have a chance to split the series Friday night at West. “Friday is a must-win,” Smith said. “With three teams competing for first (place), we have to win that game.”