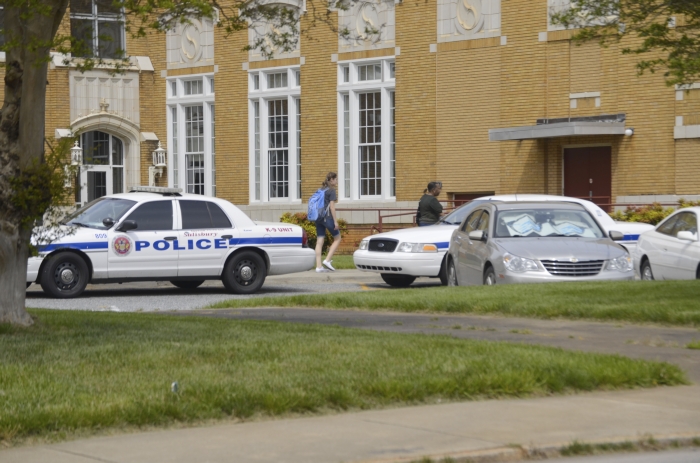 Parents were escorted into the building by a Salisbury Police officer during a code yellow lockdown at Salisbury High. Shavonne Walker/Salisbury Post

School system spokeswoman Rita Foil said the school went on lockdown at the request of the police department after a “threat” was made. She did not elaborate, and referred specific questions about the nature of the lockdown to police.

The lockdown went into effect around 2:13 p.m. and lasted about an hour, said Police Capt. Shelia Lingle.

Parents who arrived to pick up their children at the school’s the front entrance were funneled to a side parking lot. Lingle said that’s because the parking lot provided a bigger place to turn around.

Several police cars were posted on campus and around the school, including on South Caldwell Street, West Harrison Street and around the corner on Maple Avenue, near Eamon Park Apartments. Lingle said that was done as a precaution.

A couple of patrol cars, with lights and sirens on, could be seen speeding away from the area. A police K-9 handler and a dog were seen returning to a patrol car at one point.

Lingle said no arrests were made.

Code yellow means all doors to the school are locked, students cannot leave the building and there are no outside activities. Classes continued as usual during the lockdown. Parents who went to the front entrance were directed to another entrance in order to gain access into the building.