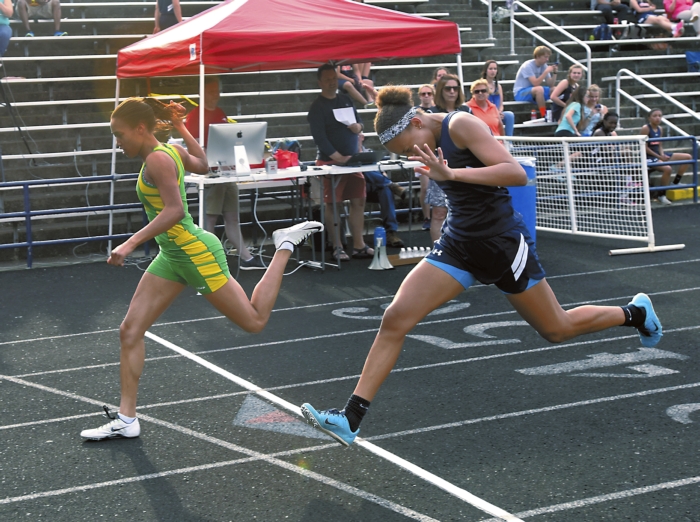 GRANITE QUARRY — It’s a small team, just 13 girls, but 13 proved a lucky number for North Rowan’s track team on Tuesday in the Rowan County Championships.
The Cavaliers scored 136 points to top Carson (128.5), East Rowan (127), West Rowan (102.5), South Rowan (29) and Salisbury (16).
“It was intense right down to the end,” said North’s Brianna White, who took the 100 hurdles and placed second in the 300 hurdles. “We knew that we had to win that last event to win the meet.”
The last event was the 4×400 relay, and North won it by five seconds. The top three schools were still in the title hunt when girls took their places for the 4×400. Heading into that final event it was North 126, Carson 124.5, and East 121.
“It’s a great meet when it’s that tight,” North coach Phillip Bush said. “Carson surprised me. Carson came out of nowhere.”
Payton Russell, dominating all day in the sprints, put North out front on the first leg of the 4×400. White took the baton next. Then Tabitha Tulloch and Rochelle Bowman finished things off.
“I guess I thought I was more tired than I was,” White told her coach. And they both had a laugh.
Sprint MVP Russell went 4-for-4 on the day. She also defended her individual county titles in the 100, 200 and 400.
“I was very tired but also very determined,” Russell said. “I didn’t know if I could win four events today, but I had a bet with (West Rowan star) J.T. Sanders that I would win as many as he did. Every time I won a race I went up to him and told him, ‘Hey, I’m still in it.'”
Russell got her day off on the right foot by winning the 100. That took some pressure off.
“My focus was on getting a good start,” Russell said. “I knew once I had a decent start that I could pull it off. But it was still an exciting race.”
Carson came out of nowhere mostly because of McKenzie and Mikayla Gadson, freshmen twins who were chasing Russell in the sprints. McKenzie was second in the 100 and 200. Mikayla was second in the 400. They twins also finished 1-2 in the long jump.
North also got a first from Chevy Blaire, who defended her county title in the shot put, and from the 4×200 relay team.
Carson got a first from Chloe Kirkpatrick in the pole vault. Kirkpatrick and South Rowan’s Brittany Luckey both cleared the bar at 10 feet, 6 inches, but Kirkpatrick had fewer misses. Both girls have made big strides. Both topped out at 9 feet in last year’s county meet.
East got first places from Brittany Small in the high jump and Jocelyn Lowe in the discus. Both seniors defended county titles. Lowe has made a big leap forward from 2015 when her winning throw was 92 feet, 7 inches. This time she needed 103-5 to nip Blaire.
Lowe, a Lenoir-Rhyne track signee, also was second in the high jump, fourth in the triple jump and fourth in the shot put. She scored 26 points and was named MVP for field events.
“I had to move around a lot,” said Lowe after her busy day. “And all those jumps took a lot out of my legs.”
West’s effort was led by Josie Heglar, the Distance MVP. She repeated as the county’s 800 and 1600 champ and also helped West repeat as 4×800 champion. West added a 4×100 first and got a victory in the 300 hurdles from Destiny Shaver. Shaver edged White by a half-second.
South got a first place from freshmen Makina Toler. She comfortably won the triple jump with an effort of 31-6.
North didn’t score a point in the distance events, but it helped the Cavaliers’ cause that the distance points were evenly distributed between Carson, East and West. North out-pointed everyone in the hurdles and sprints.
“In a big meet like this, you just trust your training — and you go hard,” Russell said.
The Cavs went so hard that they returned to the top of the county.
“For 13 girls to win a meet like this — that’s tough,” Bush said. “But they’ve put in the work.”