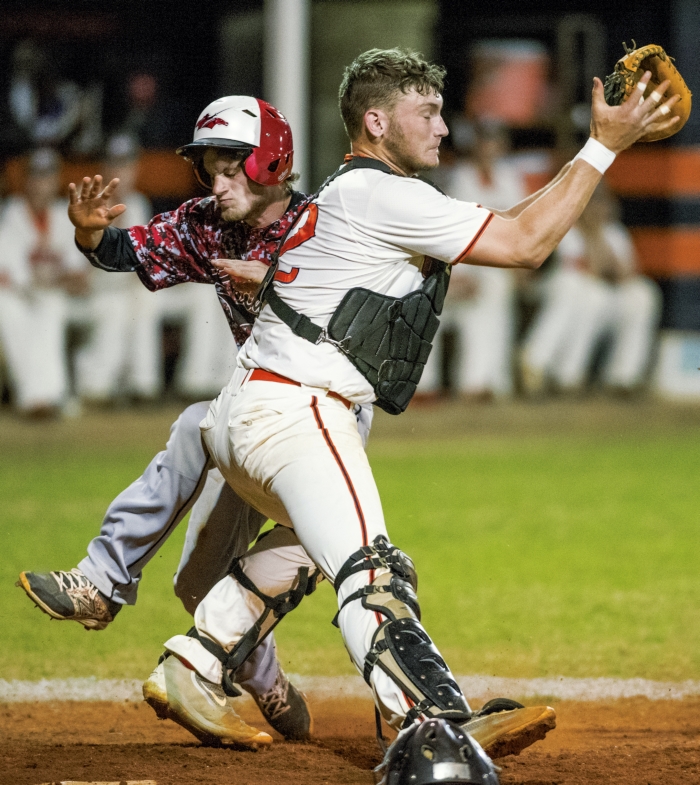 CHINA GROVE — South Rowan lefty Blake Johnson got it done with his arm and his bat on Monday, and the senior led South Rowan to a 5-4 South Piedmont Conference win at rival Carson.
South and Carson split their home-and-home SPC games for the third straight year. Johnson has been the winning pitcher for South in all three of those victories against the Cougars.
This one was especially meaningful for Johnson, who took a 12-1 pounding from Carson when the teams met at South on March 15.
“Carson kept getting hits tonight, but I kept throwing strikes and trusting my defense,” said Johnson, who has signed with Belmont Abbey. “We wanted to finish this one.”
Johnson finished. So did the fourth-place Raiders (12-7, 8-6).
The loss was a devastating one for Carson’s title hopes as it shoved the Cougars (13-7, 10-4) two games behind West Rowan in the SPC standings with four games left to play. Carson has lost six times by a single run, and Monday’s setback was the third one-run defeat in the last four outings.
“When you’re going well in baseball, you’re on top of the world, but baseball also can be cruel, at times,” Carson coach Chris Cauble said. “We went through this league 8-1 the first time around, but now we’re in a tough stretch. We can either feel sorry for ourselves or we can come back strong and turn this thing around. The most important part of the season is still ahead of us.”
Carson had nine hits, including two by Ryan Bearden.
South had 11 hits against previously unbeaten Carson right-hander Cameron Prugh, with Walker Joyce getting three. Johnson and Tyler Shepherd had two each.
“Prugh has a really good curveball, but we were trying to lay off the curve and hit fastballs,” Joyce said. “The first time we played Carson, we didn’t hit the ball at all, but we were hitting tonight.”
Prugh (3-1) gave the Cougars a chance. He struck out seven and pitched his first complete game.
In the end, walks proved Prugh’s undoing. He walked South’s leadoff batter in the sixth and the seventh. Both came around to score.
“No excuses,” Prugh said. “I missed a few spots, but mostly South just hit the baseball. I can’t take anything away from how they swung the bats tonight.”
It was all South early. Shepherd’s two-out double in the second scored Peyton Penninger and put the Raiders on the board first. South made it 3-0 in the third when Dawson Larrimore set the table with a double and Bo Corriher and Joyce produced run-scoring hits with two outs.
‘We wanted to come out swinging, being aggressive, and we had lot of timely hits, a lot of two-out RBIs,” South coach Thad Chrismon said.
Johnson rolled through the first three innings, facing only 11 hitters and allowing just one hit — a long double by Owen White.
“I did a better job of keeping the ball low against Carson this time,” Johnson said. “There were a lot of groundballs, and we were making the plays.”
But Carson tied it in the fourth. There were consecutive singles by Brandon Mock, Bearden, Grayson Whicker and Ben Shoaf. Then Logan Ridenhour’s sac fly made it a 3-all game.
“Blake was hitting his spots, but we played together and we made a good comeback,” Ridenhour said.
Prugh pitched out of a jam in the fifth by striking out Joyce on a curveball.
In the bottom of the fifth, Carson had Michael Morrison on second with no outs after a single and a balk, but White flied deep to center. Morrison, who tagged up on the play and advanced to third, was ruled out on appeal for leaving early.
South clawed back in front, 4-3, in the sixth. Penninger walked, took second on Austin Chrismon’s bloop single, and scored on a close play at home when Dillon Norton bounced a single into right field.
Carson matched that run in its half of the sixth when Ridenhour knocked in Bearden with a two-out single, and the tense game moved to the seventh.
Tyler Rary walked to start things off for South, and Bo Corriher’s bounceout advanced Rary to second.
“That was one of the key at-bats,” Coach Chrismon said. “I’m sure Bo wanted to drive one in the gap, but we needed contact, and he moved the runner.”
After a passed ball, Rary stood at third base. Then Johnson, who bats right-handed, punched a single into left field to put South on top for the third — and final — time.
“He hit a curveball,” Prugh said. “I didn’t think it was a bad pitch. Just a great job by Blake to get it over the infield.”
Johnson had to compose himself after his big hit because he was facing Carson’s 1-2-3 hitters — Morrison, White and Brandon Mock in the bottom of the seventh. That’s the part of Carson’s lineup that’s special. They are Carson’s top three run-producers, and Morrison gets on base more than half the time.
But Johnson kept the ball down.
Morrison was out on a grounder to Austin Chrismon at second. White rapped a pitch hard toward third, but Shepherd made the play. Mock’s flyball to left was well-stroked, but it was a routine play for Larrimore, and South owned one of its best wins of the season.
“The goal is to keep getting better so that we’re playing our best baseball at the end,” Coach Chrismon said. “We’ve lost some close ones lately (to Concord and West Rowan), but we’ve been playing pretty good baseball.”