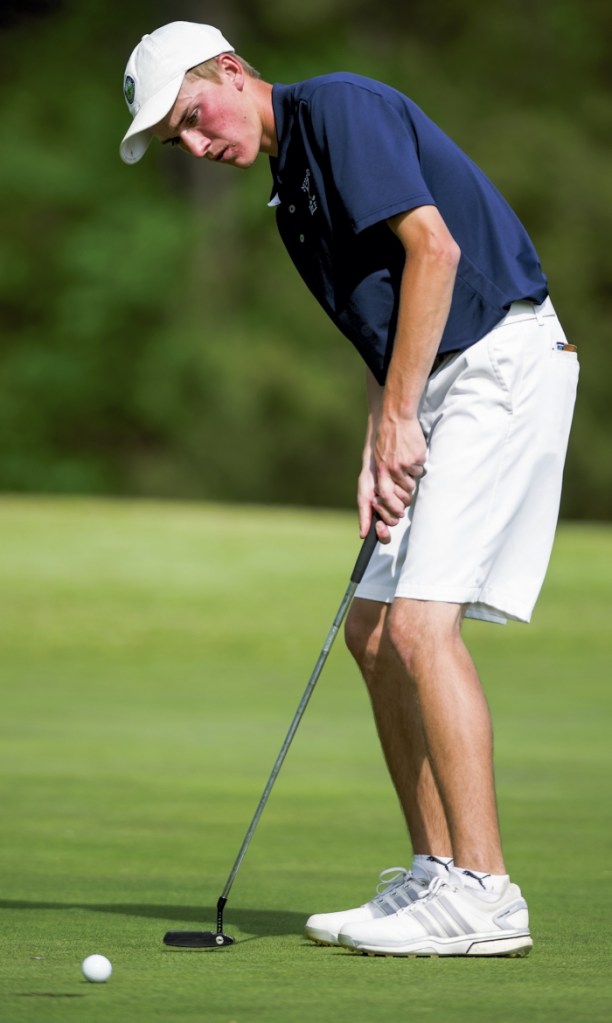 Led by senior Logan Shuping’s dazzling 3-under 67, the Mustangs cruised to a 26-stroke win over runner-up Carson (291-317) to claim their second county title in a row and give the team significant momentum for the upcoming 3A regional and state tournaments.

South Rowan was close behind Carson at 323 while Salisbury finished fourth at 329, West Rowan at 382 and North Rowan at 457. While there was a battle for the top individual title, the team championship was never in doubt.

Mustang coach Rhett Teems was definitely impressed with East’s 291, which is four shots better than the 295 they posted in winning last year’s county title. East also shot 295 in both rounds of the state 3A tournament last year but fell to six-time state champion Gastonia Forestview by five shots. The team wants nothing more than an opportunity to compete for the state title again.

“I was very happy with that score (291),” Teems said, “If we can put up a number like that in the regionals (May 3 in Asheboro), we will make it to the state. We just have to do it.” Teems was obviously pleased with the effort of individual champion Shuping but also liked the fact that five of his golfers finished in the top eight, to earn All-Rowan County honors.

Shuping, who will continue his golf career at East Carolina University next fall, picked a great time to post his best competitive round of the season with his 67. Consecutive birdies on holes 15, 16 and 17 gave Shuping the impetus to bring home individual honors.

“I obviously wanted the team to win it so I knew if I went out and played well we would be okay,” Shuping said. “I have confidence in my teammates and I just tried to keep making birdies. But it really means a lot to me to win this in my senior year.”

A total of 36 golfers from the six Rowan County high schools competed in the annual 18-hole event. East junior Nick Lyerly came in as the defending county champion as well as last season’s state 3A individual champion. But issues with his short game and putting left him at 1-over 73 for the round Tuesday, a great score by most people’s standards, but not good enough for Lyerly.

“I probably put too much pressure on myself today, “Lyerly said. “I tried to force too many shots when I should have just swung the club and let it happen. That probably cost me a few shots.”
For a brief time, South Rowan junior Parker Chavis was sitting in the top individual spot with a solid one-under 70 until Shuping posted his 67. But Chavis was still happy with the way his round unfolded. “I got over every putt today and saw the line,” Chavis said,” and I felt like I could make them all.” His sub-par round was sparked by an eagle 3 on the par five 17th hole. “That was what got me going today and I needed a little boost,” Chavis said.

Carson senior Patrick Street also put himself in contention for top honors with a string of birdies on his back nine to post his own one-over 73 for the day. With seven holes left, Street was four over but proceeded to birdie holes 17, 18 and No. 1 in succession to move to one over.

“I made a lot of errors around the greens today, a lot of miscues.” Street said, “But I got over it and battled back with those birdies to give me a chance.”

The top eight players (plus ties) were named to the All-Rowan County Golf team for 2016. Shuping the led the way with his 67, followed by Chavis at 70, then Lyerly and Street at 73. East sophomore Bryson Sprinkle turned in a 74 to make the list, followed by South’s Andrew Hubbard and Salisbury’s Alex Antosek, each at 76. East teammates Ben Rollins and Alex Miller tied for the eighth and final all-county spot with 77s.

East, West, Carson and South will be back at the Warrior next Monday for the South Piedmont Conference Tournament, with the 3A regionals looming the following week. Salisbury and North played in their Central Carolina Conference Tournament on Monday with the Hornets finishing second to West Davidson.