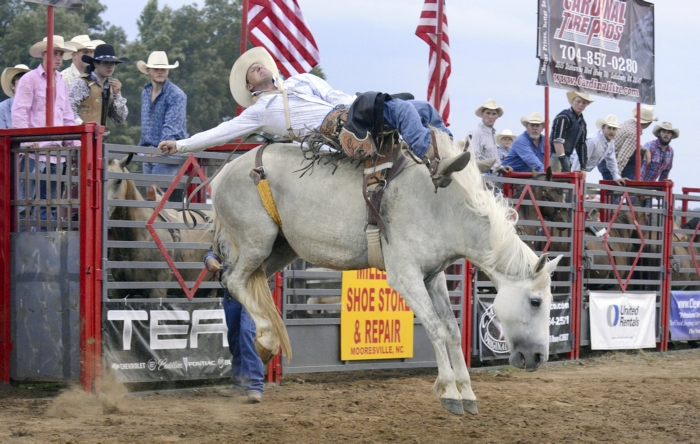 File photo Neighbors have complained about noise from the rodeo.

SALISBURY — After noise complaints from several neighbors during Monday’s meeting, County Commissioners approved a limited permit for a rodeo in western Rowan.

Commissioners considered a request to allow rodeos on May 7 and July 3 at 1025 Barringer Road — about a mile away from West Rowan Middle School. Because of complaints voiced by neighbors during Monday’s meeting, commissioners only approved the May 7 date. Commissioners also voted to have the noise permit expire at 9 p.m. instead of the rodeo’s scheduled 10 p.m. end time.

Before the vote, several people who own property near the rodeo site spoke during a public hearing and told stories of previous incidents where noise was a nuisance. More than one person who spoke during the public comment period said music from the property occasionally reaches levels so loud it can be heard inside of houses that are several hundred or several thousand feet away.

Rowan County Planning Director Ed Muire said the property at 1025 Barringer Road had never been issued a noise permit before. The property has been the subject of noise complaint calls to the sheriff’s office, Muire said.

When speaking during the public comment period, David Velazquez, who requested the permit, said he isn’t trying to cause any problems.

“If there’s anything we can do to make it better, we will,” Velazquez said.

Commenting on the request, commissioners Chairman Greg Edds said the rodeo events, which have been held previously, don’t seem to be the problem. Edds said it’s important to be a good neighbor 365 days per year.

“If we were all good neighbors throughout the year, then these two events would not be a problem,” he said.

Edds offered the motion that commissioners ultimately approved, which only allows one rodeo event. The July 3 date will be considered after Velazquez holds the first event.

• County Commissioners approved a resolution that reaffirms their support to fund a consolidated elementary school in west Rowan.

In 2014, the Rowan-Salisbury School Board and commissioners agreed on a $34 million figure for multiple capital expenditures. Most of the money, however, will be used for a new elementary school that will consolidate schools in Woodleaf and Cleveland. The total designated for the new school is $27.5 million.

Commissioners approved the resolution on Monday to prepare to provide money for the elementary school.

According to the county-school system mediation agreement, commissioners must be able to provide the $27.5 million by November. For the county to obtain the money, the Rowan-Salisbury School System first has to purchase property for the new elementary school and obtain construction bids.

The Rowan Salisbury Board of Education is under contract for a property at the corner of U.S. 801 and Godbey Road, which has a $325,000 price tag, and has paid $10,000 in earnest money. Construction plans for the building haven’t been finalized.

The resolution asked commissioners to provide $47,000 to help support revitalizing the park. It appeared on the consent agenda.

• Commissioners scheduled a public hearing for May 2 to gather input on a loan to build a new hangar at the Rowan County Airport.