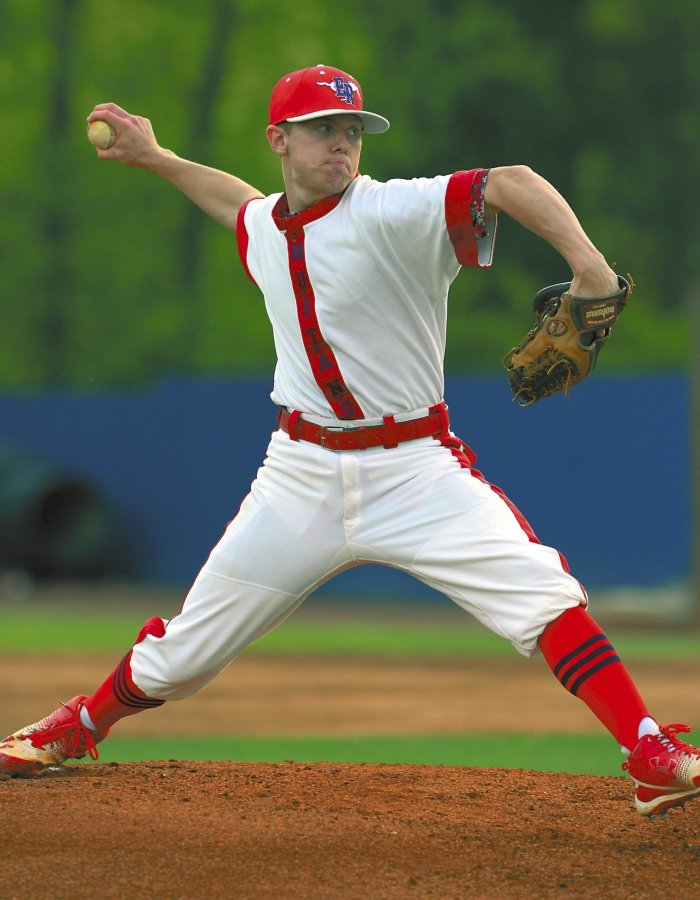 GRANITE QUARRY — With two weeks to go in the prep baseball regular season, five of the six county teams still possess realistic hopes of claiming a conference championship.
F&M Bank Classic winner South Rowan (11-7, 7-6) is the lone county team that’s out of the conference-title mix, but the Raiders still have had a good year. They sit in fourth place in the 10-team South Piedmont Conference and have positioned themselves to make the 3A state playoffs.
West Rowan (16-3, 11-2) has won 21 of its last 23 SPC games, dating back to last season, so the Falcons obviously are strong. They didn’t play anywhere close to their best in the round-robin Easter tournament conducted at Staton Field, but they still went 3-0. That’s the mark of a good team.
West is batting a modest .271 as team, but the Falcons’ on-base percentage is .414. The Falcons are patient at the plate, see a lot of pitches and have benefited from 97 walks. They’re also fast once they get on base.
Junior third baseman Brandon Walton (.458, 4 homers, 19 RBIs) has been a monster at the plate, and the Falcons always expect lights-out starting pitching from Austin Love (4-1, 1.44 ERA, 68 strikeouts) and Bryan Ketchie (6-1, 1.62 ERA).
The Falcons, defending SPC champs, also have been a fortunate team, getting most of the breaks in hotly contested one-run victories against East Rowan, South Rowan and Carson.
Carson (13-6, 10-3) and East Rowan (14-5, 10-3) trail West by one game in the SPC race. All the teams have five left to play, including three this week.
Carson has three home games this week, including tonight’s matchup with South Rowan. The venue may not matter much, as the Cougars actually have played their most impressive games — romps over West Rowan and South Rowan — on the road.
Carson has solid overall stats with a .319 team batting average and a 2.22 ERA. Carson also owns the county’s firmest defense.
Shortstop/pitcher Owen White (.350 batting average, 1.59 ERA) and center fielder Michael Morrison (.529 on-base percentage) have done what they were expected to do. Carson needed a big season from senior left fielder Brandon Mock, who hits behind Morrison and White, and he’s delivered a .355 batting average and 16 RBIs.
Five of Carson’s six losses have been by one run. The other loss was 2-0. If any team is due to get some late-season breaks, it’s the Cougars.
East Rowan has been the county’s most pleasant surprise and has won its last six outings.
East did not look good on paper entering this season. No one on the pitching staff had ever won a varsity game. Only three returners — shortstop Ike Freeman, catcher/pitcher John Owen and third baseman Jackson Justus — had experienced offensive success.
“Honestly, I thought we were going to win three or four games,” Freeman said. “I thought it was going to be the worst year of my life, but guys just kept working every day to get better, and young guys have done more than anyone expected. We may not be the most talented team, but everyone on this team cares about winning and guys just keep picking each other up.”
It’s turned out to be a lot of fun for the Mustangs, who have gotten great leadership from the UNC-bound Freeman and senior third baseman Jackson Justus, who has 17 RBIs.
“I’ve only had to give one pregame speech all season,” East coach Brian Hightower said. “The seniors have taken care of the rest.”
East has two of the county’s best players in Freeman (.444, 17 RBIs) and Owen (7-1, 3 shutouts), as well as the county’s most improved player — first baseman/pitcher Jordan Wise (.421). Wise batted .180 last season.
Right fielder Will Brown, who had four varsity at-bats last season, and center fielder Chandler Blackwelder, who didn’t play at all last season, have added speed and defense.
East’s strength is a 1.72 team ERA, but the Mustangs swing the bats with some authority (.301) and they’ve beaten Carson twice. That means they can beat anybody.
West Rowan visits East Rowan’s Staton Field on Wednesday. Mark that one on the calendar.

CCC
Salisbury’s thin pitching staff (7.40 team ERA) has been subjected to multiple non-conference beatings, but the Hornets are still perfect in league play and own a one-game lead over North Rowan and West Davidson.
Salisbury has gotten a county-leading 23 RBIs from freshman slugger Bo Rusher and is batting .335 as a team.
Now it’s crunch time for the Hornets (10-8, 6-0) as they face their four toughest Central Carolina Conference games — two with West Davidson this week; two with North Rowan next week.
When they’ve played teams other than Thomasville and Lexington, Salisbury has been outscored by 47 runs, so there are still plenty of doubters, but the Hornets have an opportunity to prove they’re a good team over the next two weeks.
Salisbury hosts West Davidson on Tuesday.
North’s Cavaliers (10-7, 5-1) have gotten a recent power surge from senior catcher Jake Pritchard (5 RBIs on Friday) and are batting .331 as a team.
The stat that’s most critical for the Cavaliers is a 1.96 team ERA that’s been spearheaded by the 1-2 starting punch of Noah Gonzalez and Brandon White. West Davidson is 16-2 overall, but North came very close to sweeping the Green Dragons.
North plays Thomasville (0-14) twice this week, so the Cavaliers should move to 7-1 in the CCC, while Salisbury and West Davidson battle.