The Dart: L.L. Goodnight and Sons: A stroke of brillant discovery 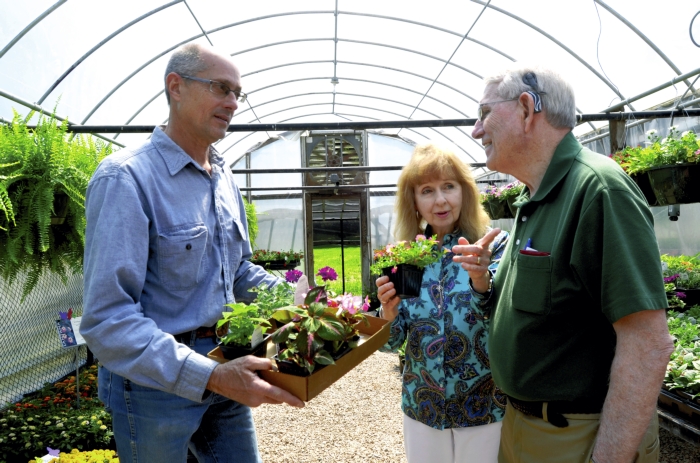 Midji and Pastor Larry Bost are longtime customers of L.L. Goodnight and Sons. The couple buys their plants every year from the greenhouse at the business. Shavonne Walker / Salisbury Post

CHINA GROVE — It has been said that the consequence of serendipity is sometimes a brilliant discovery. Many south Rowan farmers and garden enthusiasts know the paved road that leads to L.L. Goodnight and Sons is the way to hay, baby chicks and petunias, but what they may not know is the 68-year-old family business began by a fortunate stroke of serendipity.

In 1948, Lloyd Lee Goodnight (the L.L in Goodnight & Sons) was a China Grove farmer who often got his tractor stuck in a few wet places on the property, according to grandson Henry Goodnight. It happened so often that Lloyd Goodnight created a lake near those wet places.

Since he’d created that lake, Goodnight let people pay to fish on the site. The business still allows fishing once a week, one time a year.

When it became harder to get fertilizer, Lloyd Goodnight had another stroke of brilliance. He went to a fertilizer company, signed his own contract and began selling fertilizer to local farmers.

“The business started at his farm and sold 200-pound bags,” Henry Goodnight said.

The elder Goodnight would eventually buy a building for retail and warehouse space.

The family farm, particularly the homeplace and white barn, is still located just up the road from the store.

Of course, the store mostly sold fertilizer for a long time before expanding into grinding and mixing feed. During those early years, not many people had equipment to grind their own feed.

“At that time they didn’t think about ready-made feed,” Henry said.

Henry, who is now part owner of the business, along with his father, Lee Goodnight, said he always knew he’d someday go into the “family business.” In fact, he obtained a degree in Agriculture/Pest Control at N.C. State’s Agricultural Institute division.

These days, Lee Goodnight, 79, can still be seen riding a tractor or doing things around the store.

Henry’s son, Dallas, a junior at State also has an interest in taking up the family business. Right now, Henry’s sister, Sara Brandt, manages the greenhouse, while her son, Jacob, and another nephew, Ben Watts, also work at the store.

In the years that Lloyd Goodnight and his wife, Annie Lou, ran the business, it wasn’t strange to see children sitting on the wooden counter with their hands out for bubble gum. Some of those now-adults often share those fond memories with Henry while browsing the aisles at the store.

The adults whose parents shopped at the store in the ’50s now bring in their grandchildren to sometimes buy baby chicks or baby ducks. The store’s vast array of chicks, guineas, ducklings and turkeys are stationed in the middle of the store opposite the feed and supplies for horses.

“Kids like them because they get to name their chicks,” Henry said.

In 1977, the business began selling plants, Hilda Goodnight, Henry’s mother, recalled. It grew out of a need to expand for its customers.

The business began selling plants from the front porch, but as customers made requests for specific plants and the need to know where those plants grew, the business opened a greenhouse.

“We have a little bit of everything,” Hilda said casually.

She recalled school tours at the business, which doesn’t happen much anymore. Nowadays, there is the occasional parent or grandparent who takes a family member on a self-guided tour and walk down memory lane.

“Some people come in just to show the kids around,” Hilda said.

Pastor Larry Bost and his wife, Midji, always buy their plants from the store. The couple stop in to chat a bit, buy some of their favorites like petunias, marigolds, coleus and begonias.

The main reason Midji returns each year is simple. “I know the plants are healthy and will be beautiful,” she said.

The Goodnights appreciate their loyal customers, many of whom live in the southern part of the county.

“It’s a good feeling to hear people say ‘we appreciate you being here,’ ” Henry said.

Of course, he knows customers can go to the big chain stores for their feed, supplies and apparel, but it’s nothing like “giving them a fair price and good service.”

“You develop friendships over the years,” Henry said.

He truly enjoys going to work every day, mostly because it’s different every day.

“You don’t know what you’ll do that day,” he said.

And apparently you never know who you’ll see.

“I’ll come back by to get that feed,” shouted a customer from across the store at Henry.

“It’s a gathering place…you never know who you will see,” Henry said.