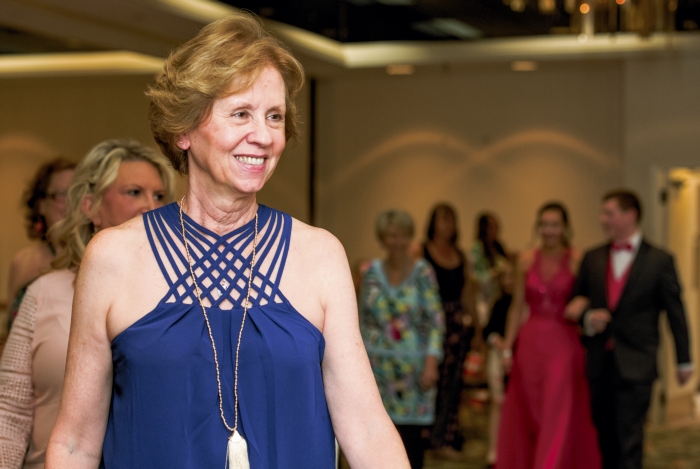 Mary Willis Page threw her arms around her husband’s neck and gave him a big hug, her eyes squeezed shut.

So, of course, Tommy was there for the 2016 Survivor Fashion Show benefiting Relay for Life. The event took place Sunday afternoon at Livingstone Culinary Art School, on Jake Alexander Boulevard. The venue — the former Holiday Inn — was also one of the sponsors for the event, along with Anna Craig, Ruby’s and Thread Shed, which provided clothing for the nearly three dozen models, the vast majority of whom were cancer survivors.

Leading off the event was Riley Brilliant, 7, a 7-year brain tumor survivor. Riley and his sister, Lizzie, paraded through the ballroom with their usual exuberance.

Mary Willis wore a cream sleeveless top, which set off her short, blond hair and deep tan. She paired the blouse with a pair of black and white palazzo pants which she said were doing a “bell-bottomy thing.” She finished the outfit by borrowing a pair of daughter Anna’s black stilettos.

Ivey Cline is a one-year breast cancer survivor. She wore a short turquoise dress set off by wedge heels. Deborah Howell, a nine-month breast cancer survivor, couldn’t take her eyes off Ivey’s short, dark “chemo curls.” She even took a picture of her hair after the show, as the two women laughed together in the lobby.

Deborah admitted she was an introvert when it came to modeling.

“This was way outside my comfort zone,” said Deborah, who modeled a turquoise top and fitted black skirt from Anna Craig, picked out by her friend and colleague Norma Honeycutt.

“That’s the one!” Norma told her when they went to look at outfits.

Wendy Bradshaw also called herself an introverted model. Wendy is a three-year breast cancer survivor, and she had Deborah discovered they shared the same surgeon. Both women laughed as they admitted to “playing with their hair” since it’s grown back out. Wendy has long curls, while Deborah sports a shorter ’do.

Stacey Shafer is also a three-year breast cancer survivor, and wanted to select a pink top to model as pink is the signature color for breast cancer support. She paired a hot pink blouse with black and white palazzo pants from Anna Craig.

“It was fabulous,” Stacey said of her modeling turn. “I wanted to of course wear pink. Tomorrow is my three-year date from my last chemo.”

Stacey’s mother and grandmother were among the 75 friends, family members and models present.

“She may be mine, but she’s beautiful,” said her mom, Vickie Carter.

“She really is a wonderful inspiration,” said her grandmother, Joy Koontz.

Rhonda Elliott is a 33-year survivor of Hodgkin’s lymphoma. She saw the call for models on Facebook, she said, “and here we are. It turned out great. I hope it picks up next year. This is a great thing to do.”

Linda Storie is a 37-year Hodgkin’s and three-year breast cancer survivor. She wore a darling, colorful tunic from Anna Craig, to which she added black leggings.

“I wanted something with sleeves,” Linda admitted. “It was a cute little dress.”

Lydia Hartung emceed the event and described all the “super cute and awesome” fashions with enthusiasm.

Ruth Sides, a 13-year colon cancer survivor, rocked a royal blue blouse with print palazzo paints from Anna Craig. She admitted she liked being a behind-the-scenes person although she’s a committed Relay fund-raiser.

“It was fun,” sadi Ruth, who’s tall and thin and has the perfect model build.

Katherene Kruckel is a survivor of three cancers: breast, non-Hodgkin’s and melanoma.

“The devil doesn’t want me yet,” said Katherene, who modeled a sassy red tunic with black pants from Ruby’s.

The New York native has lived in Rowan County for the past 33 years, and, affecting a local drawl, quipped “I’m a native now!”

She loves the color red, she said, but also loves black-and-white clothing as well, she said.

Preston Tadlock has had a busy weekend. A one-year Hodgkin’s survivor, he attended South Rowan’s prom Saturday night with a group of friends, then closed out the fashion show by modeling a gray tuxedo — his own — and was escorted by his cousin, Addison Wise.

“It’s been such a crazy ride,” he said of the past year. He said he had good results from his most recent scan last week, and he and Addison were most looking forward to going home and getting some rest.

Luminaria honoring caregivers and survivors are for the Relay for Life event May 7 at Rowan County Fairgrounds. They’re priced at $10 each or 3 for $25. Contact Tisha Goodwin at 704-640-3463 or tishgood07@yahoo.com to purchase.

Made in Salisbury: New Sarum’s grand opening hits the…