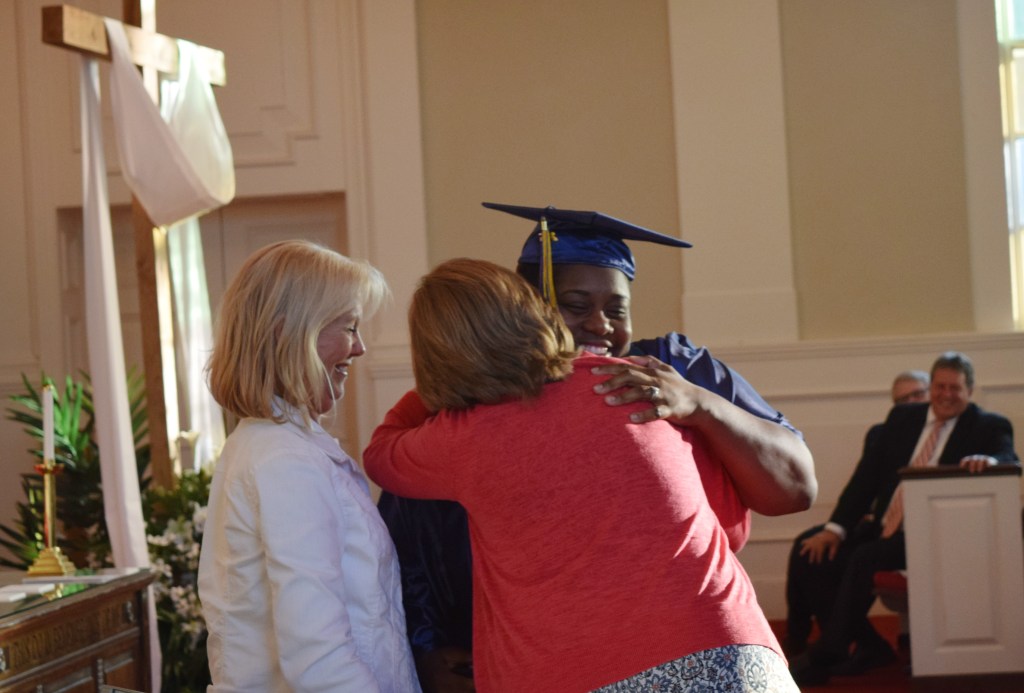 Sophia Turner receives a hug from her mentors as she accepts her graduation certificate. Turner is one of seven students to graduate from the third Jobs for Life class Sunday. Rebecca Rider/Salisbury Post

SALISBURY — Sunday night was a celebration of overcoming challenges as First Baptist’s Jobs for Life program graduated its third class.

The international, gospel oriented program launched at First Baptist in fall of 2015 with its first eight-week course. Students meet twice a week to learn valuable skills such as writing resumes, integrity on the job, effective communication, developing a vocational plan and learning how their own story can make them a valuable asset in the work force. The program helps people find dignity and value in meaningful work in addition to building a sense of self-worth and helping them grow their talents and abilities.

It’s a next-step, second chance ministry. And while Site Director Rodney Kerr said that each class has been unique and diverse in its own way, the third class’s perseverance and tenacity makes them stand out.

“They have overcome so many hardships, so many obstacles,” he said.

Students in the class have faced physical and emotional challenges, or have lost children or family. One graduate, Paul Albert, shared his story during commencement ceremonies.

Albert is from Liberia, and lost his father in the country’s brutal civil war. During his speech, he tearfully remembered an incident where the daughter of a missionary in his village was accidentally killed by the missionary’s adopted son. The missionary’s forgiveness of the boy and determination to protect him from the strict retribution of the local police were the foundation of Albert’s own faith.

Life, and faith, are not always easy, he said.

“But God’s promise to us all shall stand the test of time,” he said.

Another student, LaTanya Chambers, took a moment to collect herself before speaking of the hardships and problems the third class got through by leaning on each other. And together, they found joy.

“We made it, and we got through this together,” she said, tears on her cheeks.

“This is what the kingdom of God looks like,” he said.

Freeze, too, spoke of the importance of persevering, and following God’s plan for their life. He quoted from Proverbs:

“Trust in the Lord with all your heart, and lean not on your own understanding; in all your ways submit to him, and he will make your paths straight.”

The straight path may not be easy, he said, but it will be the fastest way to get where you’re going.

Of the seven graduates, Kerr said 65 percent have already found job placements. The rest have upcoming interviews. Now that they’ve graduated, First Baptist will continue to provide support through Bible studies and other connections as necessary.

Jobs for Life’s fourth class will begin on Sept. 7, with program interviews beginning on Aug. 10.