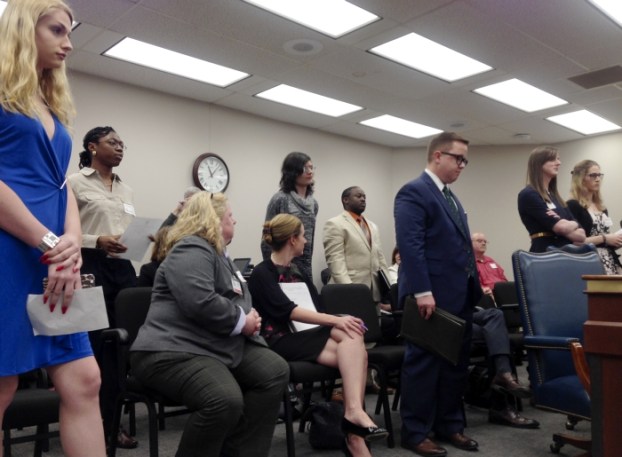 Transgender citizens stand during a Senate hearing on a bill limiting their bathroom choices in Columbia, SC. Sen. Lee Bright introduced the measure, saying he supports a similar North Carolina law that has led to some companies ending expansion plans and others taking their business elsewhere. Transgender people say the bill requiring them to use a public bathroom corresponding to their biological sex puts them in danger of harassment and violence, while supporters contend it protects childrens safety and privacy. (AP Photo/Seanna M. Adcox)

COLUMBIA, S.C.  — Year after year, South Carolina Sen. Lee Bright has watched as gays won more rights through legislation and the courts. And as he sees proposals elsewhere in the U.S. aimed at allowing transgender people to use the bathroom that conforms to their identity, he says plenty of people feel just like he does.

“I’ve about had just about enough of this. Years ago, we kept talking about tolerance, tolerance and tolerance. And now they want men who claim to be women to go in the bathroom with children,” said Bright, who has proposed a bill to keep transgender people in restrooms conforming to their sex at birth.

Bright’s proposal is part of a backlash by lawmakers across the historically conservative South who have passed laws that LGBT groups say roll back their rights.

Tennessee has passed a bill that allows counselors to refuse to treat LGBT people, and lawmakers there also are considering a bill aimed at restricting which public bathrooms transgender people can use.

However, they’ve found opponents where they might have once found allies.

Corporate leaders by the dozen, most with global reach, have been pressuring the same conservatives who lured their companies.

And even the South has seen a cultural shift since 86 percent of Mississippi voters approved a ban on gay marriage 12 years ago. The region overall is more cosmopolitan and less rural. And LGBT people are going public in increasing numbers, putting a personal face on an issue that could once be held at arm’s length.

Alliance for Full Acceptance Executive Director Warren Redman-Gress keeps all that in mind as he keeps fighting these laws even while acknowledging the gay rights advancements this century.

“Plenty of folks across the South are hurting — they feel their religious beliefs or heritage is being attacked. And they are looking to push back,” said Redman-Gress, whose group is based in Charleston, South Carolina. “But the support we are getting is quite encouraging.”

That support is finding one of the softest spots for conservatives are in their wallets. The South Carolina Chamber of Commerce vowed to spend money to defeat Bright in this year’s election.

“Senator Bright is trying to create a political crisis that doesn’t exist to save his political career. Meanwhile our state has real issues we need to address including crumbling roads,” chamber president Ted Pitts said in a statement.

People on Bright’s side of the issue have had more success in Mississippi and North Carolina, with supporters using a few different arguments. They said the Mississippi bill protects the freedom to run a business or a group without being told what to do by the government.

In North Carolina, the law’s backers said they are trying to protect people from being in a bathroom with someone they are uncomfortable with or could be a danger. But big business isn’t agreeing. PayPal canceled a major expansion in North Carolina. Opponents of the Mississippi bill are still organizing.

Conservative lawmakers have loved these kind of laws because they appeal to voters without costing much. But that might be changing, said Charles Bullock, a political science professor at the University of Georgia.

“A lot of them gave these companies incentives to come to their states. It’s not a very good return on your investment if you run them out,” Bullock said.

Supporters of the bills also have said they are trying to protect traditional values and people who believe for religious reasons that homosexuality is a sin. After signing his state’s bill, Mississippi Gov. Phil Bryant said opponents need to “also understand that people of faith have rights.”

But the South isn’t nearly as homogenous as it used to be. Since the Civil Rights era, cities like Atlanta and Charlotte have become major urban centers. Smaller cities in the South have also grown rapidly as people come from elsewhere.

The number of South Carolina residents who were born in the state fell from nearly 77 percent in 1970 to 59 percent in 2010. States across the South have seen similar trends.

“We are becoming more visible,” Redman-Gress said. “People now know gays and lesbians by working beside them or being in their families. They are finding out we’re not different. We have the same hopes and dreams and expectations out of life. And we pay the same taxes.”

In what’s scheduled to be a relatively light meeting, Rowan County Commissioners on Monday are scheduled to consider a issuing... read more