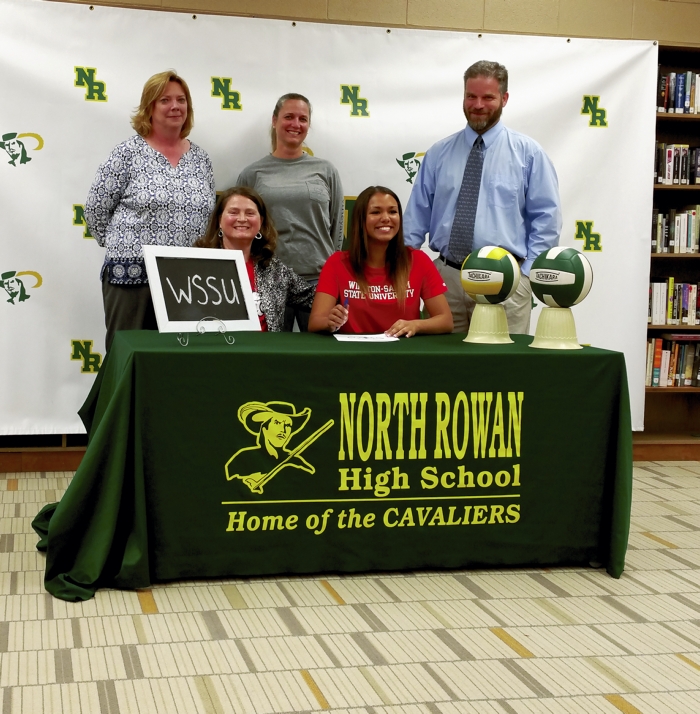 SPENCER — Her all-round career stats — 451 kills, 204 aces and 571 digs — tell part of North Rowan senior Makala Lytton’s story — but only part of it.
Lytton signed with Winston-Salem State’s volleyball program last week, an important step for her to fulfill her six-year plan to become an occupational therapist.
Lytton’s parents are coaches. Brian is North Rowan’s girls basketball coach. Sandy coaches North’s volleyball team, with Brian assisting.
Makala was adopted by the Lyttons when she very young. They realized early that her hand-eye coordination gifts were strong.
“Makala came to us when she was 1,” Sandy said. “Volleyball is something I’ve loved a long time, and when Makala was 2, she could hit with me. We knew she was going to be an athlete.”
Makala’s earliest memories are of gyms and volleyballs.
“My mother was coaching, and she’d let me play some with the middle school girls,” Lytton said. “I remember being able to spike when I was 5 years old.”
Makala dabbled with lots of sports through middle school.
“I liked track, basketball and soccer, but I was running all over the place,” Makala Lytton said. “When it came time to choose a sport to really focus on, it was going to be volleyball.”
A lot of coaches beyond the family chipped in as Makala’s journey continued. Denise Hayes, Trina Stark, and then Trish Hester. All three came to watch her sign her college scholarship.
Makala said Hayes encouraged her to stay aggressive despite youthful mistakes, while Stark stressed the game’s fundamentals. Hester coached Makala on a strong High Rock Volleyball Club team.
“Makala was playing with a lot of the Carson girls — Morgan (Hester’s daughter), Elena Turnbull and Jordan Osborne, and that team got some good recognition,” Hester said. “Makala is a competitor, she’s athletic, and she gets after it. She can do great things in college.”
Lytton already has done great things at North Rowan. She was on the varsity as a freshman.
In her sophomore season, the fall of 2013, Lytton and Brielle Blaire led North to a first-place tie with West Davidson and the Cavaliers’ first volleyball title in the Central Carolina Conference.
Lytton, who had 119 aces, was named conference player of the year. She was North’s first CCC player of the year since Carrie Powers in 1999.
Lytton’s fairy-tale career was interrupted by a knee (ACL) injury early in her junior season. That’s a big year as far as college recruiting, and she missed most of it. She went down in the Cavaliers’ fifth game.
It was the worst adversity she’d faced in athletics, but Makala came through surgery and rehab with an even sunnier smile and an even stronger desire to excel in her senior season.
“I could tell she was nervous for that first game of her senior year,” Sandy said. “But once Makala started diving, running and jumping, the athlete in her came out. It meant a lot to her and a lot to Brian and me to see that she’d come back.”
Makala had a sensational senior season. She put up career bests in kills (168) and digs (286) and added 81 aces. She and Aliyah Farmer led North to a runner-up finish in the CCC tournament and a berth in the 2A state playoffs.
Opponents, including league champ West Davidson, paid Makala the ultimate compliment by focusing their game-plan on keeping the ball away from her.
“I don’t know that I was on my best game as a senior,” Makala said. “But my goal was to be good enough that no one would remember that I was ever hurt.”
CCC coaches voted Lytton runner-up for player of the year, behind Salisbury’s Juliana Anderson. That was a ringing endorsement that she’d made it back.
Lytton is only 5-foot-7 — taller than the average female, but short for volleyball — so she’ll have adjustments to make in Division II.
Winston-Salem State’s coach is Andi Henderson, a former Catawba player and Catawba assistant. Makala met Henderson at Catawba camps before she took the Winston-Salem State job, and she’s comfortable with her. That will smooth her transition from all-round duties at North to a defensive role for the WSSU Rams.
“They want me to be a libero as a freshman, but they haven’t ruled out me hitting some as my knee keeps improving and getting stronger,” Makala said. “I’ve got a very fast arm-swing.”
She should be able to help the Rams, who were 22-8 last fall, won their first CIAA championship and competed in the Division II playoffs.
The most important thing is that a volleyball scholarship will help Makala reach her dream of a master’s degree in occupational therapy.