Made in Salisbury: New Sarum’s grand opening hits the spot 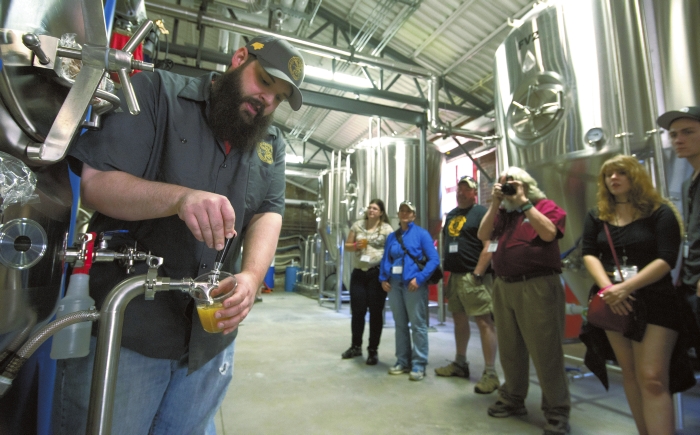 JON C. LAKEY / SALISBURY POST Brewmaster Andy Maben offers samples for the people on the VIP brewhouse tours with a special beer made with local product Apple Ugly pastries. A large crowd turned out Saturday for an afternoon of activities as New Sarum Brewing Co. celebrated their grand opening with a block party including live music, games, food and, of course, beer.

New Sarum is a project that began in an office space next to the Salty Caper back in 2012. Friends Andy Maben and Gian Moscardini named the company after Old Sarum, the original settlement name of Salisbury’s Sister City — Salisbury, England.

The new, 30-barrel brewhouse may be just a few blocks down from the original location, but it’s a long way from where they started.

“A year ago this was a brick shell, and we’re thrilled,” wife of Gian, Jessica Moscardini said of the new brewery and taproom.

Visitors to New Sarum’s taproom at 109 N. Lee St. may have difficulty recognizing what was once the old tractor building. Mood lighting, old wood and an industrial feel have transformed the interior.

“It’s been a long time in the making,” Brewmaster Andy Maben said, filling a cup with an Apple Ugly, Belgian-style brew — a special treat for those who took the VIP tour.

Running from 1 to 9 p.m. the grand opening featured live music, food trucks and a few games of cornhole. People thronged the parking lot behind the Gateway Building, snagging one of New Sarem’s five distinct brews — 142 Blonde Ale, made with grits; Old Stone House IPA; Hurley Park Blood Orange Wheat; Roundhouse Robust Porter and High Rock Red Ale — or setting up chairs in the shade to watch the band. Kids ran underfoot and the event had a festive air. And two hours into the grand opening, the VIP tours sold out until 6 p.m.

No one was sure what kind of crowd to expect, but by the end of the day, he thought more than 2,000 people would have attended.

“It definitely makes us feel welcome,” he said.

Joshua Dubois came to the event with wife, Laura and their two kids, Avery and Aiden. He was surprised, and pleased, at how kid-friendly the event was. Dubois said there’s nothing else like New Sarum in Salisbury, and it’s incredible to look on the back of a can and see the words “brewed in Salisbury.”

“I think a small place like Salisbury needs something like this,” he said. “It’s great to have something homegrown.”

And for Maben, that’s the point of the whole thing.