Editorial: Seeing the ‘lights’ on preservation 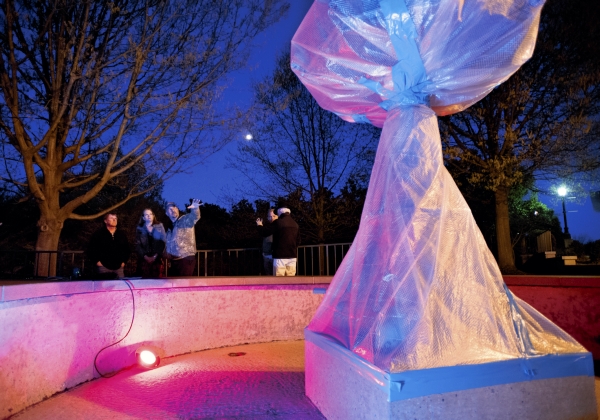 From left, Randy Lapish, owner of Caribbean Pool Service in Concord, demonstrates the appearance of colored lighting for Gateway Park’s fountain to Deborah Young, Alan File, Lane Bailey and Paul Fisher on Monday evening. The fountain, which represents the biblical figure Rebecca and is a replica of one that used to stand in The Square, is undergoing maintenance. It is located on the corner of Depot and East Innes streets in downtown Salisbury. Allison Lee Isley/Salisbury Post

At first glance, a discussion over whether the  fountain at Robertson Eastern Gateway Park should have colored lights seems sort of silly, but that was a major topic of discussion this past Thursday at a meeting of the Salisbury Historic Preservation Commission.

Colored lights for the fountain are actually the city’s idea. The city is performing maintenance on the replica fountain, installed at the park in 1997, and it has proposed changing out standard light bulbs in favor of LED  bulbs that can change color.

Stephen Brown, representing the city,  said the colored lighting might only be used for special occasions such as St. Patrick’s Day or New Year’s Eve. Pretty harmless, right? Still, opinions on the colored lights varied widely.

Clyde, a local artist, opposed them strongly during a public comment period. He said the colored lighting was incompatible with the commission’s charge of preserving history. The fountain never had LED lights in the past, and no other place in the downtown historic district uses colored lights, Clyde argued.

He warned commission members they would be opening the doors to many other places downtown wanting to employ colored lights at their properties.

Commission member Carl Peters had no problem with colored lights at the fountain and saw nothing in the historic district design guidelines that would prohibit them. Commission member Elizabeth Trick wondered whether it might be a zoning issue, similar to conditions placed on neon lights.

Acey Worthy noted that colored lights have been used on national monuments, and fellow commissioner Dan DeGraaf might have made the most salient observation, when he said it was difficult separating the question of allowing colored lights from whether having colored lights was in good taste.

One can see, just from these comments, how a seemingly simple issue of lighting can have many facets to consider. Is the “Rebecca” fountain really historic since it’s a replica of the 1888 fountain that stood in the Square until 1905? Are colored lights of any kind appropriate in a historic district? Is this really a big deal?

The short answer is, yes, it is a big deal, and the Historic Preservation Commission should be commended for giving it a fair hearing. That’s the commission’s job. While it might seem frivolous to be going through all the discussion, paperwork, public comment, man-hours and research on this matter, it’s important work.

Salisbury has designated its many local historic districts for a reason, to preserve a character and sense of place that gives the city its identity. The work behind maintaining historic districts means you can drive into Salisbury and know it’s not just another town, that the residents here find it important for you to know you’re in their city and not every place else.

With all the talk of “rebranding” going on these days in Rowan County, it’s nice to know people stay concerned about a brand we already have.