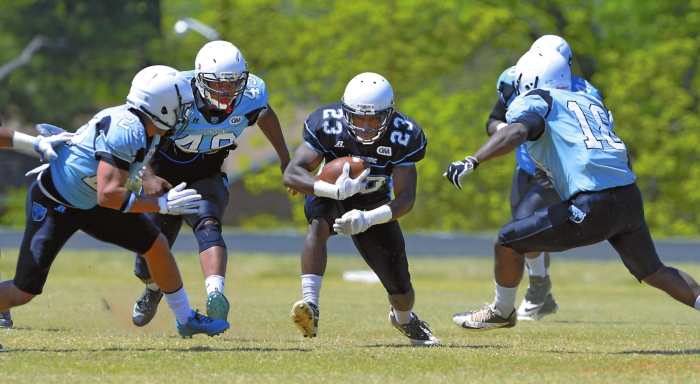 Wayne Hinshaw/for the Salisbury Post... Running back Jarius Richardson finds a brief hole as the defense, led by Danny Robinson (23), Armond Cox (49) and Jarod Richardson (18), close in for the tackle. The Richardsons are twin brothers.

SALISBURY — It’s only mid-April, but already the 2016 Livingstone football team is a hard story to tell.

Fourth-year coach Daryl Williams and his staff have spent the past three weeks studying the forrest instead of the trees, trying to picture what the Blue Bears will look like in September.

“Good things and bad things,” Williams told his team Saturday at Alumni Memorial Stadium, moments after Livingstone concluded its spring camp with a lively Blue-Black scrimmage. “But I like where we are. It’s just a matter of trusting the system until we put everything together.”

The system has some big shoes to fill. Livingstone has waved good-bye to do-it-all quarterback Drew Powell, receiver/returner Jalen Hendricks and kicker Leonardo Manzo — players who steered the Blue Bears to their first winning season since 1998. A promising core returned this spring for a spirited, getting-to-know-you period.

“We’re working on chemistry,” offensive lineman William Odomes said. “But it’s there. From January until right now, the chemistry has improved tremendously. We’ve got parts to replace, big parts. But I know what to expect from every teammate.”

Livingstone had 68 players in spring camp, with 60 in uniform for the annual offense-defense showdown. Another 17 recruits watched from the sideline and, Williams reports, more are on the way.

Nothing seems bigger than the gaping hole left by Powell’s departure. The CIAA’s offensive player of the year, he leaves the keys to the offense to at least four hopefuls — Treveontae Willis, Dallas Bruton, Thaddeus Bell and Bryan Digsby. Willis scrambled for an eight-yard touchdown and passed 17 yards to wideout Isaiah Marsh for another yesterday as the Blue Bears’ offense drove for three scores in eight possessions.

“Three weeks ago we started off kind of slow,” running back Jarius Richardson noted. “Now I think we’re a better team than we were last year. There are new quarterbacks to get used to, new problems to figure out. But we’re ok.”

The quarterback dilemma is something Williams welcomes. “We’ve got some depth,” he said. “We’re going to be pleasantly surprised at quarterback. If I’m betting on anybody, I’m betting on myself because I played the position. And I’m coaching. And I’ll find the best player for this team.”

Nothing will be decided until Livingstone reconvenes in August, but this much is certain — the Blue Bears will build with whomever wins the competition, not around him. Finding a replacement for Hendricks — who caught nine TD passes last season — may be more difficult.

“Or maybe not,” Williams said. “Last year we had a few good receivers and teams could target them. This year we’ve got five or six, including Everett Ransom. He may be another Hendricks.”

The questions on defense appear less pronounced. Livingstone put an aggressive, ball-hawking unit on the field last fall and most of it returned intact this spring. Even without linebacker DeMarcus Nolan, who missed the spring game with an illness, the ‘D’ dominated.

“We’ve had to move some people around,” said DL Armond Cox, a rising sophomore who made the CIAA’s all-rookie team. “We’ve added a couple new defensive linemen and integrated some new players coming in. But basically, our defense is all back. Sure, we can always improve and we’re going to. But the sky is the limit for us.”

Cornerback Victor Leavell was particularly sharp. A first-semester junior who played strong safety last season, he spent the afternoon playing shutdown defense on the corner against an array of receivers, deflecting passes and disrupting routes.

“People told me I wasn’t going to be able to transition to cornerback,” he said. “They said I had no feet. But I kept my head up and proved them wrong.”

“Our biggest concern is at quarterback,” he said. “But what I keep saying is don’t underestimate the system. The system will carry us until the quarterback gets right. Other than that I think we’re fine.”