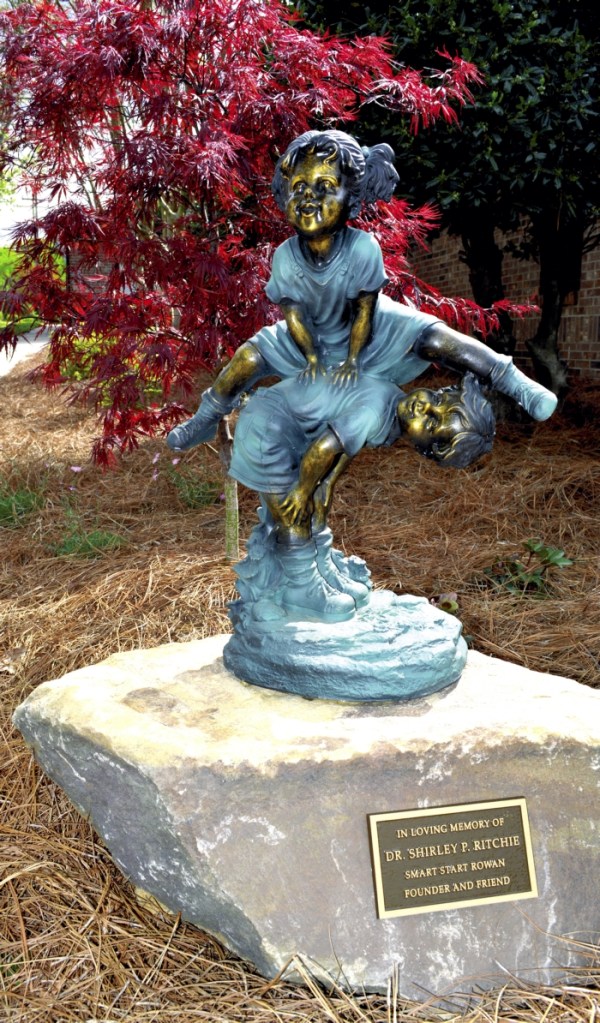 This playful statue in memory of Smart Start Rowan founder Shirley Ritchie was recently installed in a small memorial garden at the facility. Smart Start Rowan celebrates its 20th anniversary this year. Susan Shinn, for the Salisbury Post

Last summer, Shirley Ritchie called Amy Brown with a dilemma. It seemed that the Ritchies had a family wedding scheduled, and she would miss the 20th anniversary celebration for Smart Start Rowan, an agency she’d founded in 1996.

Not to worry, Brown assured her, they’d change the date of the celebration.

Sadly, Ritchie died in November following a brief illness. But her family will be among the attendees on April 21 at Rowan Museum, celebrating the contributions she made to this and so many other organizations that serve children here in Rowan County.

The event will remember Ritchie and tell the story of Smart Start Rowan. A video, which debuts Thursday evening, will showcase the agency and the areas in which its staff works. It’s also a fine tribute to Ritchie.

“It will be used for the next several years as part of our community outreach and engagement,” says Brown, Smart Start Rowan’s executive director. “It will also honor the legacy of our founder.”

Back in the 1990s, Brown explains, Ritchie was in search of a model for an inclusive childcare center. She spearheaded the effort to bring such a facility to Rowan County, Brown says. Rowan Partnership for Children was formed, and Ritchie secured funding to build the Partners in Learning Child Development and Family Resource Center.

When the partnership secured Smart Start Funds, the two groups were separated, and Rowan Partnership for Children eventually changed its name to Smart Start Rowan, but they have continued to work closely together over the years.

“Everyone is essentially a piece of the puzzle as we serve children in our community,” Brown says. “We serve this age group to ensure that they are ready for success when they enter kindergarten.”

The dinner will include the presentation of the Shirley P. Ritchie Champion for Young Children Award. Ritchie herself was the first recipient of this award, which was later named for her. Sandra Novick won the award when it was last presented in 2005.

Ritchie was to present the award, but her daughter, Celia Jarrett, will stand in for her.

“We wanted to have this event to celebrate the last 20 years of Smart Start Rowan, where we are now and how we’re moving forward,” Brown says. “We just want to make people in the community more aware of what we do, so that our community members are engaged and committed to the well-being of young children.”

“We have so many resources at Smart Start Rowan for children and their parents,” says Jane Welch, a board member and the chair of Smart Start Rowan’s Community Relations Committee. “This is such a treasure that Rowan County has.”

Along with recognizing Ritchie at the event, Smart Start Rowan is also honoring its founder’s memory with the recent creation of a small memorial garden. Ritchie’s daughter-in-law, Jane Ritchie, a landscape architect, designed the area and chose plants for the space.

“It was a good group effort,” Jane Ritchie says. “This was something I could help with. I couldn’t have asked for a better mother-in-law.”

“Shirley was cool, calm and collected when it came to her approach to ensure the well-being of children,” Brown says. “She was so passionate about it. But there was a playful side to her as well.”

The garden’s planners found a way to represent Ritchie’s playful side in a small statue of a boy and girl playing leapfrog.

Jarrett notes that her mother had a Japanese maple in her own yard, and Jane Ritchie selected a dwarf Japanese maple to set off the 10-foot by 10-foot space.

“And the statue exemplifies Mother’s joy of children. She wanted them to be carefree,” Jarrett says. “Her goal was to enable children to be nurtured, and grow into the best people they could be. The garden is just a quiet spot to reflect. It was so sweet of Amy to want to honor Mother in that way.”

Event entertainment is by Now Are the Foxes and Joel Everett Music, with dinner by Goodfellas by Chef Santos.