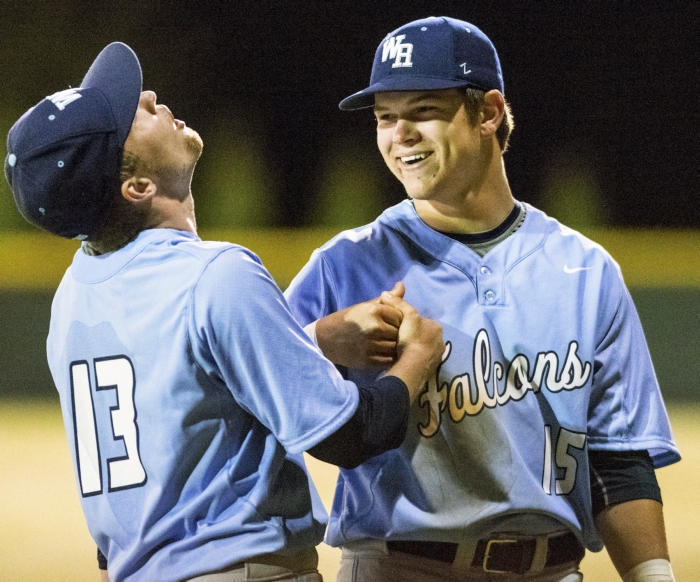 CHINA GROVE — Kacey Otto socked a decisive, three-run homer immediately after a prolonged argument, and West Rowan edged Carson, 6-5, in a wild South Piedmont Conference game on Friday.
“That was a game that should’ve gone in a different way,” Carson catcher Ryan Bearden said quietly.
All the Cougars felt that way, but the victory moved the Falcons (16-3, 11-2) a game in front of Carson, which had destroyed West, 11-0, in their first meeting.
The road win also kept West a game in front of surging East Rowan. The Mustangs (14-5, 10-3) had a 10-run inning and won at Hickory Ridge, 12-1.
Carson (13-6, 10-3) mustered only two hits — including Bearden’s two-out double in the seventh — off four West Rowan hurlers. Both teams were facing a three-SPC-games-in-a-week scenario for the first time, but West coach Seth Graham got gritty performances from starter Caleb Link, winner Olen Stamper and ace Bryan Ketchie, who recorded the final three outs for his first save.
West’s defense temporarily collapsed in the sixth inning, but reliever Brandon Walton got his team through that inning with a 6-5 lead.
“All our pitchers threw well,” Graham said. “Walton did a good job to keep his composure.”
It appeared that the story was going to be Carson starting pitcher Maddux Holshouser, who stayed busy pulling rabbits out of hats. Holshouser walked six batters in the first three innings, but the only run he allowed came on a two-out, run-scoring single by Trevor Atwood. Centerfielder Michael Morrison and shortstop Owen White produced line-drive double plays behind Holshouser, and West had another runner thrown out at the plate by right fielder Alden Blackwelder.
“Maddux pitched himself into trouble with all those walks, but then he pitched himself out of trouble,” Carson coach Chris Cauble said.
Holshouser was doing such of fine job of dodging danger that he gave his team momentum. White’s sac fly tied the game at 1-all in the third inning. Logan Ridenhour’s sac fly put Carson in front, 2-1, in the fourth.
But then all heck broke loose in the top of the sixth inning. Austin Love smashed a double but was thrown out at the plate moments later on a relay throw by White.
“We had to make two perfect throws and then Bearden applied a good tag at the plate,” Cauble said.
An error and a walk put two more Falcons on. When Holshouser fell behind Link 2-and-0, White, Carson’s ace, moved from shortstop to the mound.
White walked Link on a full count to fill the bases. Then a full-count walk to Lee Poteat tied the game at 2-all. When Brett Graham followed with a bouncer to shortstop, Carson got the force at second base for the second out, but Graham was safe at first by a full step, and the Falcons led, 3-2.
That’s when Cauble made a lengthy plea for an automatic double-play ruling on Poteat’s slide into second. Some Hollywood marriages have been of briefer duration than that argument.
“The rule says you can’t pop-up slide and the rule says you can’t slide past second base,” Cauble said. “It’s a call we’ve had made against us several times this season, but it wasn’t made tonight. Rules are made to be enforced. Not enforcing the rules tonight cost us five runs.”
It cost Carson five runs because as soon as order was restored, Otto crushed a high fastball from White to left-center for the three-run homer that gave the Falcons a 6-2 lead.
“Owen has a very heavy fastball, and if you make contact, it’s got to go somewhere,” Otto said. “I got that one on the sweet spot, for sure.”
It was Otto’s second homer of the season. He boosted his RBI total to 20.
“He knew he was going to get a fastball from Owen,” Coach Graham said. “It was kind of up, but you still have to be a really good hitter to match up with that velocity.”
Stamper had relieved Link in the fourth frame, and he took the Falcons into the sixth. Walton relieved Stamper after the leadoff man reached in the sixth. The Cougars made it 6-3 on two errors. A wild pitch made it 6-4. Blackwelder’s RBI groundout cut West’s edge to 6-5, but Walton ended the inning with two strikeouts to maintain the lead.
Ketchie came in for the seventh to face tough hitters and quickly retired White and Brandon Mock on ground balls. But then Bearden sent a shot screaming toward the center-field fence. When the 6-foot-4 powerhouse made contact it looked like the ball might leave the park, but he settled for a double.
“It was a fastball outside, and I drove it that way,” Bearden said. “It wasn’t a homer, but I was hoping.”
Grayson Whicker was next. His liner toward the first-base bag was caught, and the Falcons held on.
“Great battle between two good teams,” Otto said. “They fought back, but then we fought back.”
Coach Graham said the game gave him “a few more gray hairs.”
Cauble liked the way his team rallied when it looked hopeless, but the bottom line was Carson’s second one-run loss to a rival this week.
“It’s not going our way right now, but I believe you make your own luck,” Cauble said. “We’ve got to play through this until things turn around. And if we win the rest of them, I believe we’ll at least tie for first.”