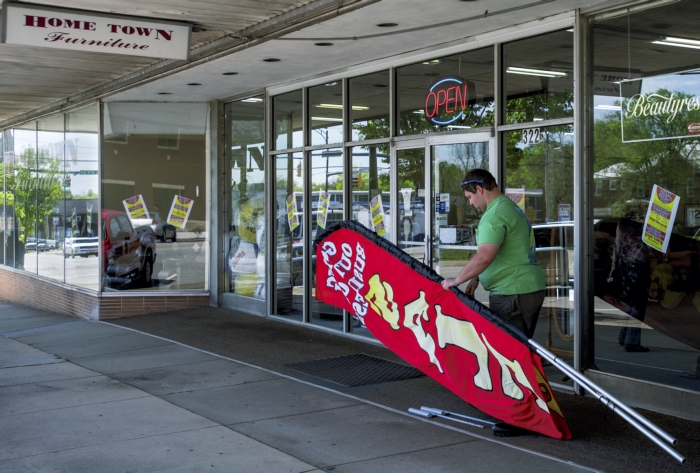 ALLISON LEE ISLEY/SALISBURY POST Hunter Morgan, 5 year employee at Home Town Furniture, takes down the sale banners for the day on Friday afternoon. Home Town Furniture, located at 322 South Main Street in Salisbury, is having a going out of business sale. Home Town Furniture is a locally family owned and operated business that has been serving Rowan County since 1973. After 43 years of operation, they plan to be closed in June.

Ludwick was the store manager and Cauble was the sales manager.

They didn’t really like the high prices and high pressure atmosphere, so after 13 months they decided to start their own furniture store, along with Barron Moore.

“That was our first thing in the furniture business, was to offer discount furniture,” Steve Ludwick, son of John Ludwick and current owner of the store, said, “and that’s been pretty much our premise the whole time.”

Now, 43 years later, Home Town Furniture, at 322 S. Main St., is clearing out its inventory and going out of business.

“It’s just hard to get people in. And we advertise. We do advertising in the Post and do circulars and things like that but we still can’t out advertise the gallery stores,” Ludwick said.

Steve Ludwick said that he and his father eventually bought out the other partners and became the sole owners. When he passed away a couple of years ago, Steve Ludwick took over.

Ludwick said the store was the first to offer discount pricing for furniture in Salisbury. The original owners heard about other stores that offered discount pricing, and decided to try doing the same thing.

The store used to be at 322 N. Main St., but the property was bulldozed to make room for a parking lot for court and law enforcement offices in 2001.

Ludwick said his father and Cauble decided to give their store a more comfortable, slower paced experience to counter the high pressure atmosphere of other furniture stores.

“K-Town was more of a high pressure type thing. We’ve always been more low-key, offering the best value we can,” Ludwick said.

Along with offering value in terms of pricing and products, Ludwick also wanted to provide valuable customer service. He says he and his employees “bend over backwards” to help customers in any way they can. They even help customers who bring in furniture purchased from other stores.

“The biggest thing with us is treat people the way you want to be treated,” he said.

And Ludwick said there have been some long-time, loyal customers.

“They started out buying from us and then they had children and they’d bring their children in … We’ve had a lot of those customers that have just stayed with us through the generations,” he said, adding that those are the customers who have become friends.

Ludwick said he appreciates all of his past customers. Since announcing the closing, he said people have been coming in and telling him how sad they were to hear the news.

“We’ve had a lot of different reactions. A lady said, ‘I just bawled when I read it,’” he said.

Others decided to walk into the store for the first time.

Ludwick said the industry has changed over the years, making business more difficult. Manufacturers have closed and customers started buying furniture over the Internet. More customers also started to view furniture as something short term and disposable, so they looked for furniture that cost less and were of lower quality.

“(Customers) automatically go to who does the most advertising. Even though we can match people’s prices, they don’t come here to check our price,” he said.

Despite it all, Ludwick said he has enjoyed the time at the store along with his employees, who he views more like family.

Ludwick said he is close to retirement age and his fiancé has cancer. It was about time for him to spend some more time with her.

He hasn’t set a closing date yet, but Ludwick said it will probably be the end of June.

“It’s always what I wanted to do and it’s always been fun. It’s never really been a chore or work. It’s been more fun than work,” he said. “That’s the reason I’ve stayed in it as long as I have.”

For more information on Home Town Furniture and to see what is in stock, visit hometownfurn.com.