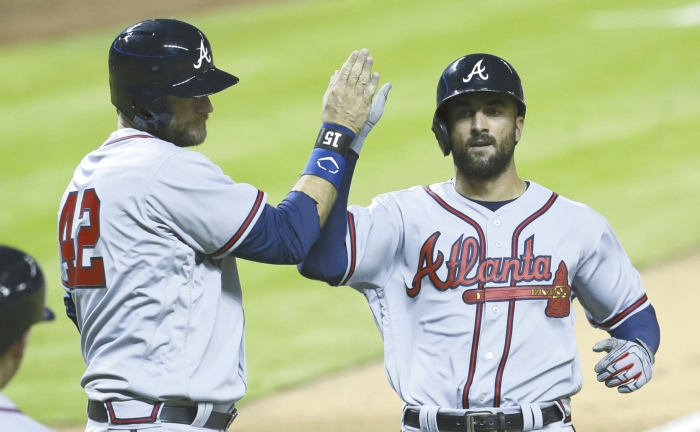 AP Photo/Alan Diaz ... Atlanta Braves ‘ A.J. Pierzynski, left, high-fives Nick Markakis after both scored on base hit by Adonis Garcia during the eighth inning of Friday night’s game against the Marlins in Miami. The Braves won, 6-3, snapping their nine-game losing streak.

MIAMI (AP) — The Atlanta Braves gathered on the field for hugs and high fives, executing a flawless postgame celebration despite a lack of practice.

Adonis Garcia drove in three runs in the final three innings and the Braves rallied for their first victory of the year after nine consecutive losses, beating the Miami Marlins 6-3 on Friday night.

The Braves managed just one hit in the first six innings, trailed 3-0 in the seventh and appeared on the verge of falling to 0-10, which would have matched the worst start in franchise history in 1988.

The comeback began with three consecutive hits in the seventh, including a double by Garcia to drive in the first Atlanta run. Nick Markakis’ RBI single in the eighth made it 3-all, and Garcia’s two-run double put the Braves ahead.

“It’s an extremely important victory, not just because it was our first one, but because we were able to come from behind,” Garcia said through a translator.

Freeman singled and scored while hiking his average to .107.

Miami’s Marcell Ozuna had three hits, but struck out with the bases loaded against Arodys Vizcaino to end the eighth. Vizcaino went 1 1-3 innings and retired J.T. Realmuto on a groundout with two on in the ninth for the save.

Even though Gonzalez’s pitching changes worked, the manager second-guessed himself afterward, saying he asked too much from Vizcaino.

“I’m not real happy about my usage of the bullpen,” he said. “I don’t like putting players in positions where they might hurt themselves, and Vizcaino throwing 35 pitches doesn’t sit well with me.”

Braves starter Williams Perez allowed eight hits and three runs in 4 1-3 innings. After two starts he has an ERA of 7.00.

David Phelps (2-1) allowed two runs in one inning and was part of a meltdown by the Marlins’ bullpen, which hit two batters in a four-run eighth.

“It was one of those games,” manager Don Mattingly said. “We didn’t get the outs that we needed.”

Christian Yelich had three hits for Miami to raise his average to .429.

Marlins newcomer Wei-Yin Chen, making his second start of the year, allowed two runs in 6 1-3 innings. Chen hadn’t pitched since opening day, when he was hit on the throwing elbow by a comebacker but stayed in the game, but he hardly looked rusty.

In the first 6 1-3 innings he allowed only one hit and faced the minimum, but three consecutive hits sent him packing.

The Marlins, starting a seven-game homestand, fell to 0-3 this year at home. The Braves improved to 26-12 at Marlins Park.

Third baseman Garcia committed back to back errors in the third inning, but they didn’t lead to any runs. Garcia has four errors this season.

“The game didn’t start the way I wanted,” Garcia said, “but luckily baseball is a game of opportunities, and I got more opportunities to help the team.”

Marlins: LHP Mike Dunn, who is on the DL with a strained left forearm, said he underwent a second MRI that reconfirmed the initial diagnosis of inflammation.