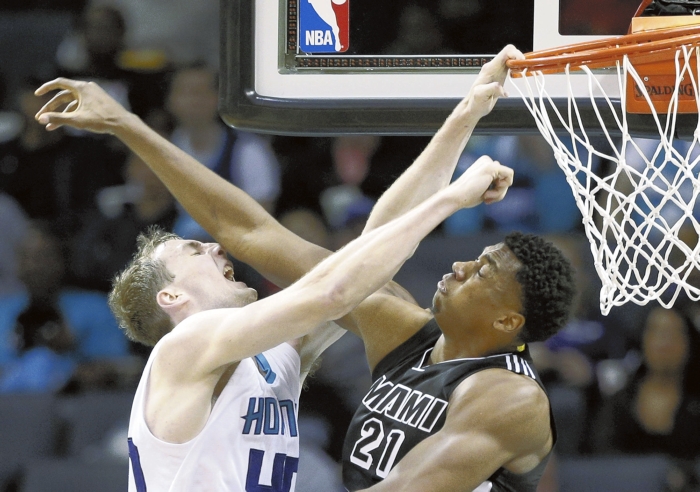 AP Photo/Chuck Burton, File ... In this file photo from Dec. 9, Charlotte Hornets’ Cody Zeller, left, is fouled by Miami Heat’s Hassan Whiteside, right, in a game in Charlotte. The third-seeded Heat will face the sixth-seeded Hornets in the first round of the NBA’s Eastern Conference playoffs, beginning Sunday in Miami.

CHARLOTTE (AP) — The last time the Charlotte Hornets won an NBA playoff game Michael Jordan was in his first season with the Washington Wizards.

Yes, it’s been that long.

The Jordan-owned Hornets look to put an end to that 14-year drought when they face the third-seeded Miami Heat in the first round of the Eastern Conference playoffs beginning Sunday.

“We have a really good team that can make some noise in the playoffs and give those guys a challenge,” point guard Kemba Walker said. “I think we’re capable of playing with them and capable of beating them too.”

Charlotte was swept in the first round by the LeBron James-led Heat two years ago. They were also lost 4-0 to the Orlando Magic in 2009-10. In all, they’ve lost 10 straight postseason games, leaving the city thirsty for a playoff victory.

The franchise hasn’t won a playoff series — or a playoff game — since reaching the Eastern Conference semifinals in the 2001-02 season.

The Heat and Hornets split their four-game season series with each team winning on the other’s court once, making for what could be the most competitive and intriguing matchup of the NBA’s first round tilts.

The last time the two teams met in the postseason the Hornets were hot, but quickly quieted by James and the Heat.

It didn’t help that Charlotte’s best player at the time, center Al Jefferson, injured his foot in the first game and was a shell of himself by the end of the series, eventually forced to sit out the fourth and deciding game.

Jefferson said he doesn’t view it as unfinished business.

“I just look at it like I was hurt and now I’m back in the playoffs and feeling great,” said Jefferson, who had 26 points in Wednesday night’s regular season finale. “I was hurt earlier but now I’m back and my rhythm is back. To be where we were two years ago against that team, we just happy to be there. I’m just happy to be in the postseason against anybody.”

Jefferson acknowledged the Hornets didn’t have the firepower to knock off the Heat two years ago when they were basically the Walker and Jefferson show.

With the Hornets finishing 11th in scoring this season and ninth in defense, he thinks they stand a better chance this time around with their balance.

Clearly Miami isn’t the same team it was with James, but they still have more playoff experience than the Hornets, who have had only one player (Courtney Lee) who has played in an NBA Finals.

“It’s going to be tough,” Walker said. “D-Wade, Joe Johnson, Amare… you know, guys who’ve been through the wars and know what it takes to win in the playoffs. But I know coach and the rest of the coaching staff are going to come up with an unbelievable game plan.”