‘Today would be a good day to fly:’ On a glorious spring day, a veteran takes to the air again 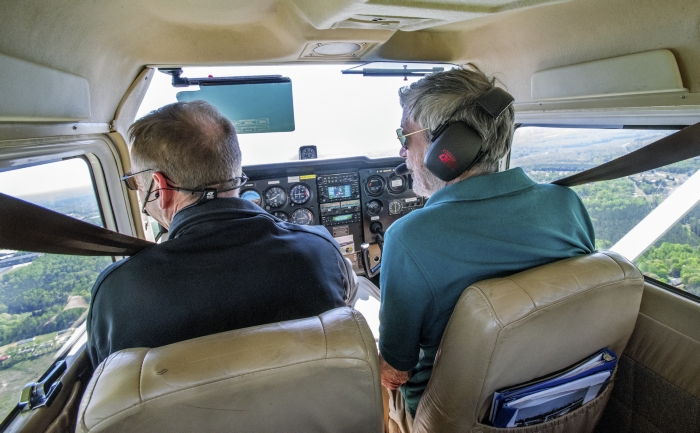 Gary Moore, pilot, left, flies a Cessna 172 with James Cox, U.S. Army Vietnam veteran and resident of N.C. Veteran’s Home, making Cox’s dream to fly again become reality on Thursday afternoon. The Committed to Caring Committee was able to grant his wish with the Second Wind Dreams program. Cox worked as an aircraft mechanic for 32 years and has missed working with planes.

SALISBURY — When it was obvious, sitting there in the cab of the Cessna 172 that he was going to go flying, James Cox turned to all his friends from the N.C. Veterans Home and said, in his best Gen. Douglas MacArthur voice, “I shall return.”

Within minutes, Moore, Cox and Paige Allison, a veterans home staff member accompanying Cox, were speeding down the runway at Rowan County Airport and lifting off for parts north.

Over the next hour, cruising in an almost cloudless, Carolina-blue sky, the Cessna flew over High Rock Lake, Interstate 85 toward Thomasville, the Greensboro airport, the south side of Winston-Salem (catching a glimpse of Pilot Mountain) and Statesville before returning.

“Enjoyed that,” a happy Cox said as he was able to climb out of his co-pilot’s seat and into a waiting wheelchair.

“I could have stayed up there.”

The staff at the N.C. Veterans Home made getting Cox airborne again a special project, part of its Committed to Caring, “Second Wind Dreams” program.

Arranging Cox’s flight took weeks of working out the logistics and gaining the appropriate permissions, without letting Cox know what was going on behind the scenes.

A licensed aircraft mechanic for 32 years and once a general aviation pilot himself, Cox talks all the time at the Salisbury veterans home about airplanes and his days working on them all over the country.

Often, when he’s outside on a smoke break, he’ll look skyward and tell anyone who’s listening, “Today would be a good day to fly.”

Well, Thursday was one of these days. After his flight, staff members from the veterans home took Cox to the flight training conference room at the Rowan County Airport and held a little celebration.

A cake was decorated with the message, “My Dream Came True.” There were soft drinks, cold-cut sandwiches and a nicely wrapped present waiting for Cox. The package held a brand new, authentic Army green flight jacket., the kind Cox had worn during his tour in Vietnam.

Peoples said the Pruitt Health staff at the veterans home wanted to see Cox in the air one more time and, with the flight jacket, “I figured this would bring back some memories.”

Dusty Mills, line service supervisor at the airport, also wanted Cox to have something — a model replica of a Mohawk Airlines plane — the kind Cox once worked on.

“It’s always an honor to help a fellow vet and a fellow aviation guy,” Mills said moments after handing Cox the small plane, which he hoped Cox could place on his nightstand.

The surprise worked, by the way. The staff had persuaded Cox, 70, that he was just going to have one of the routine tours of the airport that he has been on in the past.

When Moore asked whether he would like to take a look at the 1977 model Cessna parked on the apron, then said “Do you want to sit in it?” Cox quickly answered in the affirmative. (That’s military talk.)

“You want to go for a spin?” Moore eventually asked.

Cox said he wasn’t sure he wanted to spin, but he knew what Moore was implying.

Cox has been a resident of the veterans home since 2005. A motorcycle accident contributed greatly to his difficulty in getting around without a wheelchair or cane.

He first flew in an airplane as a 16-year-old, when someone took him up in a Cub.

“I was hooked right then,” he said. “Never have been able to get rid of it.”

He said he’ll always remember what an aviation instructor later told him about flying: Always remember there’s no place to park and get out.

Cox said he made it through the summer, fall and winter after graduating from high school before he was drafted as an 18-year-old.

“Spring came around, and I got that letter that said, ‘Greetings, from the President of the United States,'” he recalled.

He served two years in Army aviation, including a tour in Vietnam, before coming home and starting his career as an aviation mechanic. He also earned his pilot’s license and flew small planes such as Cessna 150s and 172s.

“Believe it or not, I enjoyed working on them as much as I did flying,” Cox said.

For the main part of his 32-year career, Cox worked on DC-9s out of Atlanta, Chicago and Atlanta again. But he also had brief duties in places such as Phoenix, the Seattle-Tacoma areas of Washington State and parts of Tennessee.

The regional airlines he worked for through the decades changed names with every merger and buyout, but he finished up with Northwest Airlines.

“It was time to come home (to North Carolina),” Cox said of his decision to retire. “I said, ‘That was enough.'”

Cox often took advantage of working for the airline to fly to various places in the world, as long as he could find free, “space-available” seats. Once the pilots on those trips learned he was a licensed mechanic, they often asked Cox to sit with them in the cockpit so they could ask him questions about their plane.

Cox said he visited England, France and Germany on some of those trips.

“The only thing I didn’t do is I wanted to go to Peking,” he said.

Before he went on his flight Thursday, Cox told the veterans home staff that the small general aviation planes, such as those often using the Rowan County Airport, represented “real flying.”

As he flew Thursday, Cox busily chewed gum and kept good track of where the plane was and how it was oriented to the compass directions. Moore said he offered to turn the plane’s controls over to Cox a couple of times, but Cox was satisfied just being a passenger.