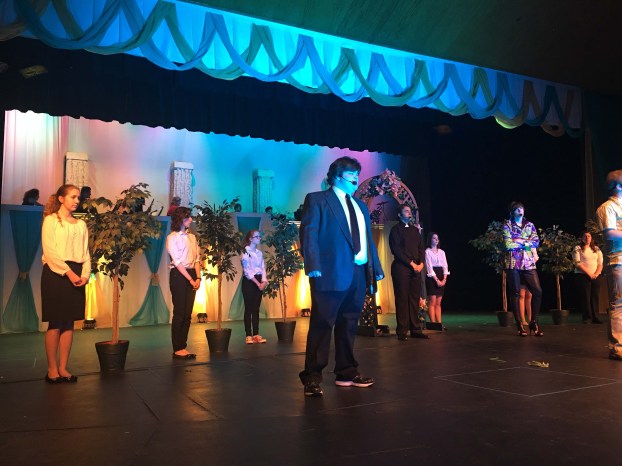 ‘The Wedding Singer’ to open at Carson High

“The Wedding Singer” at Jesse C. Carson High School promises to be a retro-tastic blast back to the 1980s.
This musical comedy, based on the movie of the same name, has been in the works at Carson High since July of last year. Approximately 100 Carson students total in the orchestra, technical theatre crew, and acting ensemble respectively come together to create a musical experience like no other. Countless hours of rehearsal are spent perfecting each moment.
The Fine Arts Department at Carson begins working on its annual musical the summer before opening. The process lasting as long as the school year involves choosing the best musical to suit the students being represented. After closing this past year’s “Shrek the Musical,” students and faculty were excited to begin working on a musical aimed at a more high school age base. Students enjoy working through moments that involve heartbreak, unrequited love, and finding love in an unexpected way, and this show covers all the bases.
“Wedding singer: A comedy musical” brings to life the story of Robbie Hart (played by Jimmy Reiff, senior), a nice guy who has one of the most romantic jobs in the world: he sings at wedding receptions with his bandmates George (Hunter Cates, senior) and Sammy (Carson Sifford, sophomore).
When Robbie must face with heartbreak as Linda (played by Jillian Rippey, freshman) dumps Robbie as he waits for her at the altar, how does he find a way to continue working at weddings? When singing at a wedding turns sour, and Robbie is thrown into a dumpster, bandmates try to help him by suggesting working at other functions like a . . . Bar Mitzvah. Working at these functions are best friends Julia (Morgan Austin, junior) and Holly (Amery Barton, senior). The two are also focused on their troublesome love lives. When Glen Guglia (Jordan Morgan, senior), Julia’s boyfriend, proposes, Julia enlists Robbie Hart to help her plan her wedding and a romance begins to bud.
You must come see how their unlikely romance unfolds. Jeff Street, band teacher at Carson, serves as musical director alongside Megan Wyatt, who serves as choral director. Sydney Overcash brings some Center Stage Dance Studio magic as choreographer, while Alex Reynolds and Bristol Glass, both theatre teachers at Carson, direct this fast paced comedy.
Tickets on sale now at theatrecarson.weebly.com. Shows are April 14-16 at 7 p.m. and April 17 at 3 p.m. in the Jesse C. Carson High School auditorium.
You Might Like