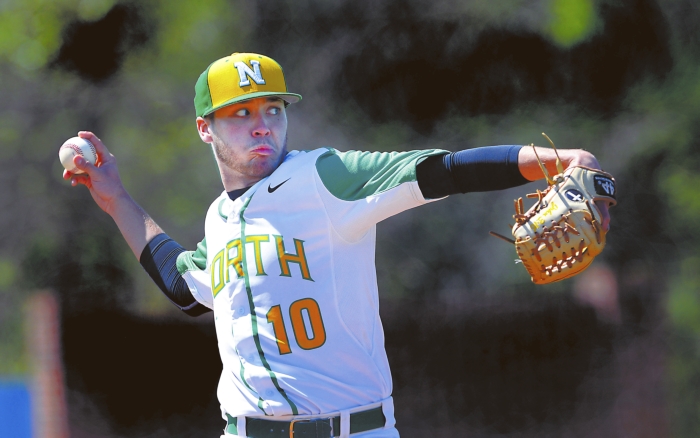 SPENCER — Senior pitcher Lee Sells has put up a record of 7-2 for North Rowan’s baseball team over the last three seasons.
That record will surprise some people because the 5-foot-11 right-hander has experienced quiet, under-the-radar success. He’s gotten those seven wins coming out of the bullpen or by making starts against the lesser teams on the schedule.
But Sells is a very effective pitcher now. He’s a hurler good enough to be called on in North’s big games down the stretch.
He’s also a confident pitcher. When your ERA is 1.02, you have every reason to be confident.
“He’s got his stuff down,” North catcher Jake Pritchard said. “He’s crafty and he can locate.”
Greensboro College, a Division III school that competes in the USA South Athletic Conference with schools such as Averett, Methodist and N.C. Wesleyan, believes Sells can help their program.
Sells made things official with the Pride last week.
Sells has taken pitching seriously for only three years.
“When I was a freshman on our jayvee team, I was a first baseman and a third baseman,” Sells said. “I didn’t think of myself as a pitcher at all, but we needed pitching, so I tried.”
Sells will be the first to admit he wasn’t great when he got his first opportunities with North’s varsity in 2014 as a sophomore. He went 3-1, but the 4.76 ERA wasn’t pretty. Neither were the 17 walks compared to only 11 strikeouts.
There was substantial progress as a junior — 3-1 with 23 strikeouts and 15 walks. That’s when Sells began to believe he could pitch in college.
“I’d started throwing a lot more strikes,” Sells said.
Sells pitched for the Clemmons-based Carolina Rockies showcase team in the offseason and worked hard to drum up recruiting interest. He sent out emails, asking coaches to travel to watch him pitch. A Greensboro coach finally did scout him in a game at Davidson College, and Sells pitched into the seventh inning in a 3-1 loss.
“I was nervous, but Greensboro liked what they saw and we stayed in contact,” Sells said. “Then I visited the campus and committed.”
But then Greensboro made a coaching change in December, hiring Frank Maldonado, who had been the hitting instructor at Division II national champion Tampa, to direct the program.
“For a couple of months I didn’t hear anything, and I wondered if things were still in place at Greensboro,” Sells said. “But then Coach Maldonado contacted me. He still wanted me to come play for them, and he said he had plans for the program to be something special.”
It’s looking more and more like Greensboro will be getting a good hurler. Sells has figured out a lot.
“You watch kids grow up in four years and go from scared-to-death freshmen to confident seniors,” North athletic director Ben Hampton said. “You watch kids develop a work ethic and a competitive edge. We watched Lee develop his arm strength and now we’ve seen him find command.”
Sells has struck out 17 this year while walking only three. He’s 1-1 with a save.
The loss came in an impressive start against Central Cabarrus in the Easter tournament at Staton Field. Sells threw five innings in a 2-1 loss and allowed no earned runs.
His save was a good one — against South Stanly.
“I brought Lee into that one with two on and one out and we’re trying to hang onto a two-run lead,” North coach Aaron Rimer said. “He looked at me and I told him he could get out of it with one pitch. That’s exactly what happened. He made the pitch he needed to make, and we turned a double play.”
Sells appreciates the patience Rimer had with him when he was struggling. Now he appreciates the faith Rimer has in him in key situations.
“That faith is justified,” Rimer said. “His confidence has blossomed, and he’s a tough kid. Playing football (Sells was a reserve receiver) toughened him up. And he listens to his coaches. If I asked him to go bang his head on the concession stand, he’d do it.”
Sells gives credit for his increased confidence level to Garry Bakker, the pitching instructor at Extreme Performance in Salisbury.
Bakker pitched at UNC and also hurled in 128 professional games in the minors, including a season with the Kannapolis Intimidators. He’s helped Sells’ mechanics, and he’s helped him with his curveball, but mostly he’s strengthened his mental approach.
“I know I can throw all my pitches for strikes in any situation,” Sells said. “And when I throw strikes, I know I’m going to get outs.”