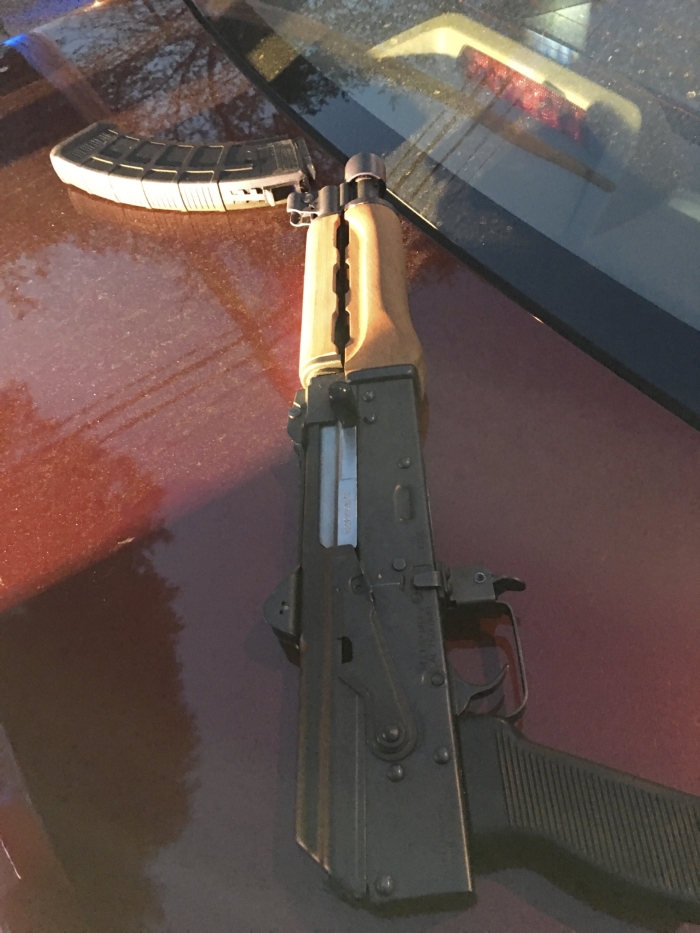 This AK-47 assault rifle was seized during a traffic stop in which the driver and passenger were charged. Photo/Salisbury Police

Police say a Salisbury man went through a stop sign, nearly hitting a police officer. He was intoxicated and later told the officer he would drink and drive again. An assault rifle was found in his vehicle.

Salisbury Police charged Malik Rashaad Jones, 21, of the 200 block of Vanderford Street, with resist, obstruct, delay an officer; driving while impaired, carrying a concealed weapon and open container, all of which are misdemeanors. He was issued a $20,000 secured bond.

Jones was determined to be the driver in the traffic stop, which occurred Wednesday around 8 p.m. at the intersection of East Fisher and South Shaver streets. His passenger, Devogea Daejon Monroe-Carter, 20, of the 2300 block of Duntavin Way, Charlotte, was charged with misdemeanor carrying a concealed weapon. He was issued a $1,500 secured bond.

Two officers were traveling in the area of South Long and East Monroe streets when a burgundy Chevrolet Malibu ran through the stop sign, nearly striking the officer’s vehicle. The driver turned right onto East Bank Street at which point the officer activated his lights and siren. The vehicle continued onto South Shaver and came to a stop, a report said.

The officer noted Jones had glassy eyes and slurred speech. The officer said he would not listen to commands from the officer, Police Capt. Melonie Thompson said.

One officer saw a gun between the front seat and center console and he alerted the other officer. Both officers drew their guns and ordered the two men out of the car. Jones refused to get out willingly and had to be removed from the car and handcuffed.

The AK-47 assault rifle with pistol grip was seized. A report said there was also 25 rounds of ammunition in the car and one in the chamber. The men also had an opened bottle of Hennessy in the car.

Jones requested his attorney be present to witness the officers’ give him the Breathalyzer test. While they waited, Jones cursed the name of a Salisbury judge, cursed at the officers and admitted when he got out of jail he would drink and still drive. He also told the officers he should have run from them.

Both Jones and Monroe-Carter remain in the Rowan County Detention Center.