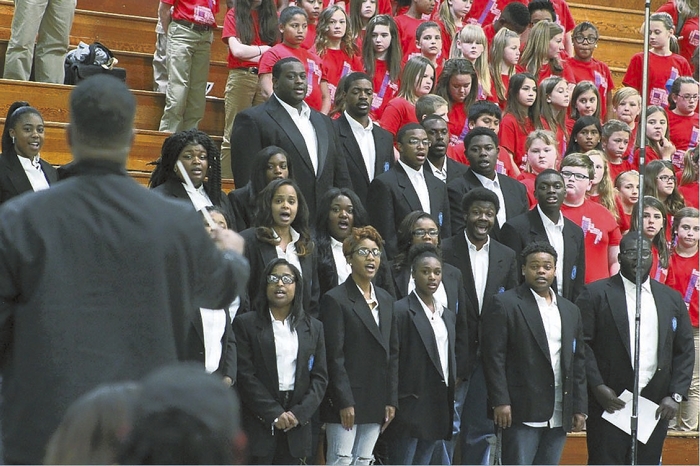 SALISBURY – Animals took over Livingstone College’s Trent Gymnasium on April 10 – and no one seemed to mind one bit.

The brilliance of Symphony Music Director David Hagy, the exuberance of the elementary kids and dominant performances by Livingstone’s students combined to create an electric atmosphere inside Trent Gym for the nearly 90-minute concert.

“I really liked it,” said Eli Sherrill, 11, a fifth-grader at North Hills Elementary School who sang with the Honors Chorus. “It was fun to be with everybody.”

The annual Salisbury Symphony Family Concert rotates between Livingstone and Catawba College. This year, however, was the first time it was held in Livingstone’s gym versus Varick Auditorium. It was also the inaugural time the college’s band participated.

“This was an excellent experience,” Livingstone Band Director Anthony Jones said. “The band had a wonderful time participating with the symphony, our choir and especially the fifth graders. Since I arrived at Livingstone last year, I’ve focused on ensuring our sound reflects the excellence that our president, Dr. Jimmy R. Jenkins, Sr., constantly preaches about. Sunday’s Family Concert was definitely a step in that direction, and I look forward to collaborating with the Salisbury Symphony again in the future.”

Before each number, Hagy explained the song’s significance to the audience. For example, before the performance of “Colors of the Wind” from the hit Disney film Pocahontas, he said: “It’s not really so much about animals but it’s about protecting our world, our country. The view of English people and Indians is very different in the song.”

Soprano Maggie Maxwell sang the song as the symphony played, receiving rousing applause from an audience that showed its appreciation throughout the event.

Hagy prompted laughter while introducing Livingstone’s choir and band, which sat patiently through several numbers before their chance to display their musical talent.

“All right,” Hagy said. “We’ve had lions and tigers. How about some Blue Bears?”

Livingstone’s students performed the college’s alma mater, “My Livingstone,” composed by Victoria Richardson and written by W.F. Fonvielle. The alma mater was followed by “Colors of the Wind.”

The audience seemed to get a kick out of the spirited performance, “The Flight of the Bumble Bee,” from The Tale of Tsar Saltan, first performed on Nov. 3, 1900. But the biggest hit of all was undoubtedly the performance of “I Bought Me a Cat” from Old American Songs, Book 1, by the Rowan County Fifth Grade Honors Chorus.

Excited parents snapped pictures and filmed video during the performance by the kids, dressed in khakis and red T-shirts bearing a musical note on the front.

Tiffany Garcia, music teacher at Koontz Elementary School, sat in the stand “pseudo-conducting” as the fifth graders sang. Several Koontz students were in the chorus, including Ezekiel Robinson, II, and Jessie Bowers.

“I was a little nervous, but I sang anyway and I loved the music,” Jessie said. “I was nervous, but I still tried my best and I did well and I liked the symphony,” added Ezekiel.

Garcia said she enjoyed the concert and was proud of all of the fifth graders, particularly Ezekiel, Jessie and several others from Koontz.

Nate Brink, 17, a student at Rowan County Early College, said he attended the concert “to hear and learn and grow in my knowledge about symphonies” and because one of his teachers recommended it to him.

Macy Jaynes, 10, a Hurley Elementary student who sang with the Honors Chorus, said the concert was “really fun.” Her mother, Beckett Jaynes, and her grandmother, Brooke Bridges, attended.

Mia Mason, 11, an Overton Elementary student who sang with the chorus, said “it was fun an interesting.” Mia’s mother is a former Livingstone employee.

“It was an excellent performance, one that Livingstone was very proud to host,” said the institution’s president, Jenkins, who attended with his wife Dr. Faleese Moore Jenkins. “I’m always excited when our students get a chance to demonstrate their capabilities and also when Livingstone gets to partner with other Salisbury/Rowan County organizations. This was a great way to spend time on a Sunday afternoon.”

As the crowd filed out of the gym and equipment and instruments were transported to cars, Hagy said he’s pleased the concert came together so well.

“It was really an exciting concert for us,” Hagy said. “As always, it was good to work with Dr. DaVaughn L. Miller, and it was also nice getting to know and working with the band director, Mr. Jones. I’m glad the audience seemed to enjoy the concert, and I really hope we will all find ways to respect the earth and the animals in it.”