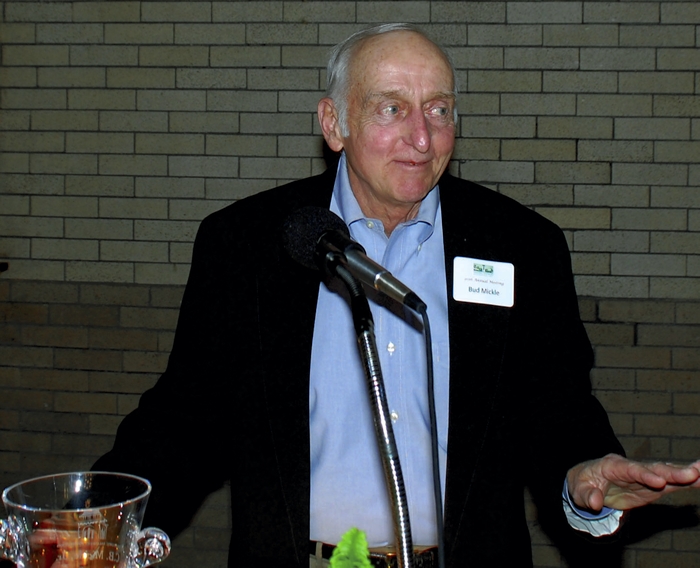 SALISBURY — For his decades of service to Historic Salisbury Foundation and preservation efforts in the community at large, Bud Mickle received the foundation’s top award, the Clement Cup.

The award is named for Ed Clement, a founder of HSF and a leading preservation figure in the state and nation.

Mickle served on the HSF’s board of trustees from 2004-2013, and he was the board’s president from 2006-08. He raised important funds to replenish the foundation’s revolving fund in 2007-08, as the country was hit by an economic downturn.

Past HSF President Doug Black said Mickle was “always ready to lead” and served the foundation as a volunteer worker and through crucial land and monetary contributions that helped HSF’s program of work, including its revolving fund.

As a board member with the foundation, Mickle joined the unsuccessful fight to save three early 20th century buildings on West Fisher Street when the adversarial owner was his own church, Black noted.

McGuire served on the HSF board for 10 years and was longtime chairwoman of the foundation’s education committee. She worked tirelessly over several years in getting Davyd Foard Hood’s book, “The Architecture of Rowan County,” reprinted even though the original plates had been lost.

Clement said Perry had an unmatched record of service to the foundation. Perry is the only person to have served in all major positions with the foundation: president, vice president, executive director and chairman of OctoberTour.

Perry was executive director from 1992-98. Clement said Perry used his lawyerly skills for the preservation of many historic properties and toward the creation and nurturing of several of Salisbury’s historic districts.

Recently hired Executive Director Karen Hobson reviewed many of the foundation’s accomplishments over the years and in most recent months. Hobson noted the rebranding efforts underway for Rowan County and how many survey results pointed to the city’s historic character, the downtown and Salisbury’s historic neighborhoods among the more notable qualities.

Over the last four decades, Hobson said, “Historic Salisbury Foundation has made the difference” in keeping the character and quality of the community intact.

In the past year, HSF has sold the Myers-Morris House at 1428 N. Main St. through the revolving fund, and Hobson said the foundation would be closing on the sale of another North Main Street property Wednesday.

HSF also has initiated a joint project with Livingstone College that will aim at stabilizing eight houses on West Monroe Street making up the  college’s old faculty row. HSF will stabilize the exterior of the houses. Livingstone will rework the interiors and try to find new uses for the properties.

The project is starting at the Lynch-Nicholson House at 624 W. Monroe St. It will be on this year’s OctoberTour as a rehabilitation in progress.

The foundation recently held its third annual Sacred Places Tour and plans to offer its second “History on Tap” series this summer. Thanks to a year-end fund-raising effort, Hobson said, electrical repairs were made to the foundation’s Hall House.

Treasurer Diane Dillon Hooper reported the foundation enters the new year with $3.8 million in assets, of which $3.6 million is fixed property. The organization has $122,000 in cash, of which $41,000 is unrestricted.

Sherry Beck, Steve Cobb and Pam Morris were approved as new board of trustee members, each for a three-year term.

White McKenzie Wallenborn, the night’s guest speaker, was born in the Whitehead-Stokes Sanatorium and lived in Salisbury until his family moved to Virginia when he was 7. His father, Pete Wallenborn, made a considerable impact here after moving to Salisbury from Chicago in 1913.

Pete Wallenborn came to Salisbury as an inspector for granite curbstone. When asked to stay and manage a troubled quarry in Granite Quarry, Wallenborn agreed as long as he were given an opportunity to purchase the quarry later, which he did.

Pete Wallenborn married Elizabeth McKenzie in 1916. Their engagement happened during a nighttime party at the McKenzie home on West Bank Street, which interestingly would be the first property ever saved years later by the foundation’s revolving fund.

At 10:30 p.m. a telegram arrived at the McKenzie home for Wallenborn’s friend, Don Clement, who told the crowd the telegram was officially announcing the engagement of Pete and Elizabeth.

The couple were married at St. Luke’s Episcopal Church, had their reception at the Boone’s Cave Club and caught Train No. 38 north for a honeymoon that combined with Wallenborn’s business interests in granite.

Among other things, Wallenborn helped in founding Salisbury’s first Boy Scout troop, the YMCA, the Chamber of Commerce, the Rotary Club, the Rowan County Airport, Salisbury Granite Co. and the Country Club of Salisbury, for which he served as president.

White Wallenborn said Don Clement “was always right there with him.”

“Above all else, my parents loved everything and everybody (in) Salisbury,” Wallenborn said.

In connection with his interest in a Rowan County airport, Wallenborn’s father was asked to be Will Rogers’ companion in Salisbury for a day until a plane flew in to pick up Rogers in the Hedrick farm’s pasture.

Pete Wallenborn met Rogers’ train at the depot around 7 in the morning and spent much of the day with the nationally known humorist and actor. Before he flew off that day, Rogers told Pete Wallenborn, “Boy, get that airport going, because aviation is going to be the future of this country.”

White McKenzie Wallenborn said his father also was host one day for George Washington Carver, who wanted to tour some of the county’s industries and farms. Carver made his stop in Salisbury during an eight-day visit to North Carolina, hoping to take things he had learned back to Tuscaloosa, Ala.

Pete Wallenborn told his family Carver was “the most brilliant man I ever met.”

White Wallenborn also remembered that his brothers played baseball at times with John Hanford, the late brother of Elizabeth Hanford Dole. Sometimes, Dole’s mother, Mary Hanford, would fill in at second base.

Pete Wallenborn eventually moved to Charlottesville, Va., to head the Virginia division of Superior Stone. In Salisbury, the Wallenborns lived in the granite block house at 628 Mitchell Ave., now the home of Al Dunn and his family.

White Wallenborn said he fell into a fish pool at the Mitchell Avenue house as a 2-year-old and was drowning before the family’s servant, Gentle Ingram, rushed in to save him.

A well-known physician and historian, Wallenborn has been called a “national treasure” for his scholarly research and works on Thomas Jefferson and Sallie Hemings; George Washington’s final illness; and Marshal Ney.

Wallenborn graduated from the University of North Carolina at Chapel Hill in 1951, the University of Virginia Medical School in 1955 and the U.S. Air Force School of Aviation Medicine in 1957. He served as clinical professor at the UVA School of Medicine from 1961 until his retirement in 1994.

Wallenborn said it’s interesting that his mother’s home on West Bank Street sat on the highest elevation in Salisbury, and the home he moved to in Charlottesville also is at the city’s high point.