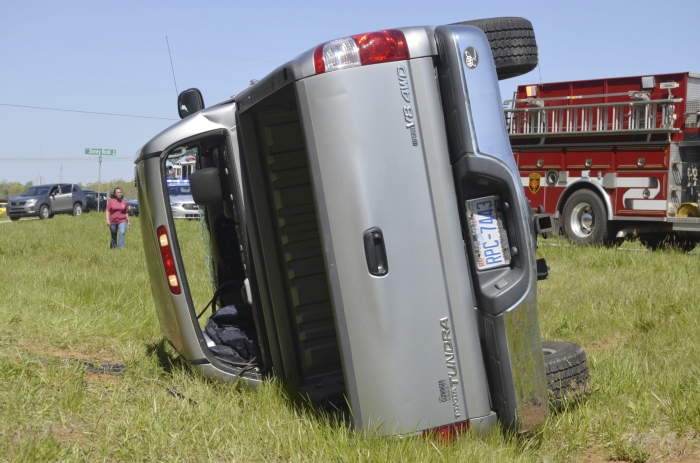 The driver of this Toyota Tundra lost control of the pickup Thursday morning, overcorrected, ran off the road and overturned in the 5600 block of Statesville Boulevard, near Stoney Knob Road and West Rowan Middle School. Shavonne Walker/Salisbury Post

A man was injured Thursday morning after he lost control of his pickup, overcorrected and ran off Statesville Boulevard. The vehicle overturned and came to rest on the driver’s side, temporarily pinning him inside.

No name was immediately available, but according to Trooper K.G. Barringer, the man was placed in an ambulance and taken to the hospital. Specific injuries are unknown at this time.

The single-vehicle crash occurred around 10:51 a.m. in the 5600 block of Statesville Boulevard, near Stoney Knob Road and West Rowan Middle.

Barringer said it’s not clear at this point why the man lost control of the Toyota Tundra, but he said he should know more after talking with the driver once he arrived at the hospital.

He said fire personnel had to secure the truck using jacks to keep it from moving.

Alexander said the East Spencer fire chief came upon the crash. A deputy with the Rowan County Sheriff’s Office was also on scene.

The road was blocked at Stoney Knob Road so fire personnel could maneuver around the vehicles.