LA fans consider Bryant’s last days, and life without him 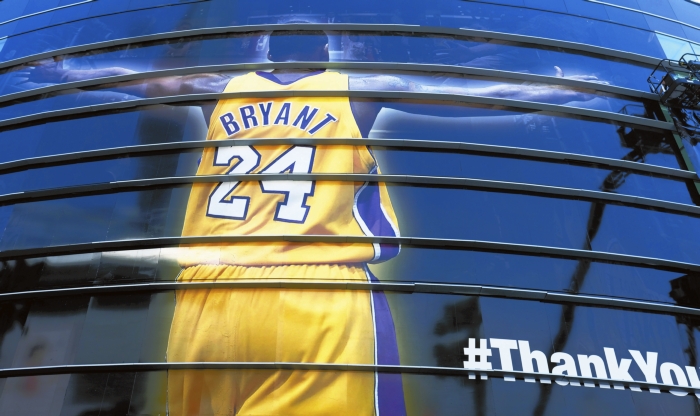 A giant banner congratulating Kobe Bryant is draped around Staples Center before his last NBA basketball game, a contest against the Utah Jazz, in downtown Los Angeles on Wednesday, April 13, 2016. Many of Bryant's fans - even some of the adults - have never known Los Angeles without him. It's a feeling they're about to have to get used to as fans celebrate his final night as a Laker. (AP Photo/Richard Vogel)

LOS ANGELES (AP) — Many of Kobe Bryant’s fans, even the adults, have never known Los Angeles without him. It’s a feeling they’re about to have to get used to.

For two decades he has loomed over the city like no other figure, often literally on billboards and the sides of downtown buildings.

In the hours leading up to his last game Wednesday, many thousands of those fans packed shoulder-to-shoulder into the plaza outside Staples Center, the arena that opened just as his legend was beginning to grow, and was home to most of his biggest moments.

They began arriving in the morning and the crowd swelled as the day went on, with chants of “Kobe! Kobe! Kobe!” erupting from the crowd.

Most didn’t even have tickets for the game. They just wanted to be close enough to bask in Bryant’s last Laker moments. Many wore jerseys bearing his current No. 24, many others his old No. 8. Some had replicas of his five championship rings.

He owned the city in a way no athlete has since Magic Johnson.

Los Angeles is full of movie and TV stars, but they are not local heroes. They belong to the world.

Carlos Hernandez, 25, is among those who have no pre-Bryant memories.

“Kobe means LA,” he said. “Twenty years of my life I’ve known him, since I was six.”

Bryant lacked Johnson’s magnetic, smiling charm or Michael Jordan’s iconic image projection, yet he looms as large as both for many of the gathered fans.

“I grew up watching Michael Jordan as a kid, so I only caught the tail end of Michael Jordan’s career,” said Luis Leon, who was raised as a Laker fan despite living in Phoenix. “So the closest thing to Michael Jordan was Kobe Bryant. The way he carried himself on the court was beautiful. He was the last link to Michael Jordan for my generation.”

Leon drove the six hours from Arizona to LA to be there despite not having a ticket, or hope of getting one.

The gathered fans were unanimously willing to forget for now that the last Laker team Bryant led was the worst the city has ever seen (16-65).

But unlike Dodgers announcer Vin Scully, another LA icon in his final season, Bryant was by no means universally revered here. Many scorned him as a ball hog who took too many shots, and a salary hog who kept the team from signing free agents to stay relevant in his late career.

There was also the lingering memory of the Colorado rape charges that were dropped in 2004 when his accuser refused to testify just before the beginning of trial. The case could have led to a fall from grace before Bryant’s career was halfway done, instead of the swan song he’s had for the past season.

Siqueiros said the dropping of the charges didn’t convince her of his innocence, and added to her distaste.

“I’m so glad he’s gone,” she said. “It was long overdue. Why they sacrificed the last few seasons for him is beyond me.”

Back among Bryant’s admirers outside Staples, Alfonso and Amber Ortiz were among the lucky ones who would get to go inside. They got their tickets in November, when the prices were merely sky-high and not yet astronomical.

“Kobe means everything to me,” Alfonso Ortiz said.

The couple’s baby, Brooklynn, wore a Lakers bandana on her head as Amber held her. She’s not their only child.

“We actually have a son,” Amber Ortiz said. “Named Kobe.”