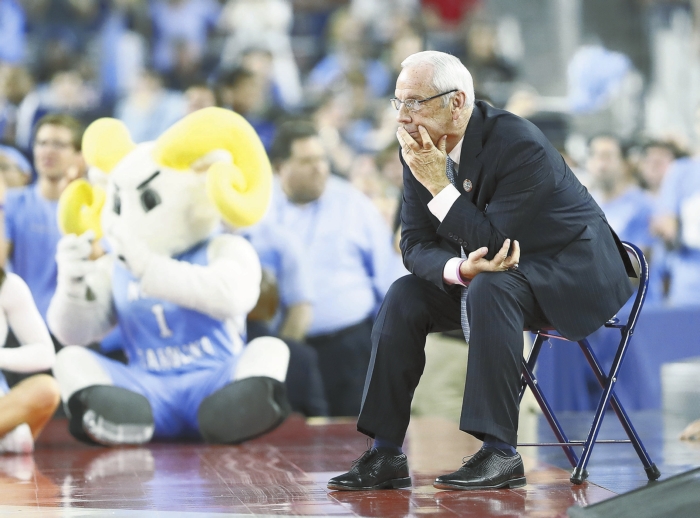 AP photo ... In this file photo from April 4, North Carolina head coach Roy Williams watches during the first half against Villanova in the championship game of the Final Four.

CHAPEL HILL (AP) — There was no long mourning period for North Carolina coach Roy Williams after the heartbreaking loss in the NCAA championship game. Within days he was on the recruiting trail and meeting with current players to talk about next season.

Apparently, he’s not ready to call it a career just yet.

“If I were going to quit,” the Hall of Fame coach said, “I sure as the dickens wouldn’t have seen four (recruits) in an 18-hour period last Thursday and Friday.”

Williams held a season-ending news conference Tuesday, a little more than a week after the Tar Heels lost to Villanova on a buzzer-beating 3-pointer in the title game. He said the goal was to “bring closure” to an emotional season with a veteran group that started the year as a preseason No. 1, eventually developed the toughness and fight he wanted, then fell one shot short of meeting its biggest goal.

“I don’t think you ever get over it,” Williams said. “I really don’t.”

Williams, 65, heard plenty of questions during the Final Four in Houston — and chatter during the regular season, too — about when he might retire. He had dismissed those questions as well as ones about his health, which increased in frequency after a rare public bout in February with the vertigo he has battled for more than two decades dating to his time at Kansas.

The Tar Heels also wrapped up yet another season played amid the shadow of an NCAA investigation into the school’s long-running academic fraud scandal touching athletes in numerous sports. The NCAA hit the school with five largely broad-based charges last May, including lack of institutional control, in a case likely months from resolution.

On Tuesday, Williams again said he’s sticking around at his alma mater, saying he hoped to coach “until I can’t.”

“I don’t know what else I can say,” Williams said. “I mean, that (Villanova) game will have nothing do to with what Roy Williams does with the rest of his life.

“I’ve changed: I guess for four years I said I wanted to coach six to 10 more years. And I thought it was silly to say that four years ago and still say it, so I went down one. I’ve said I hope I can coach five to nine more years. That’s what I said in a home (recruiting visit) last week. And so that’s all I can say.”

Williams said he met with his team last week to talk about the season, then headed out recruiting. Some of those meetings included talk about whether players might declare for the NBA draft early.

New rules make it easier for players to test the waters and still keep eligibility as long as they don’t hire an agent. Williams hopes to get a “definitive” answer on that front next week, which could determine whether the Tar Heels return a nucleus good enough to again make them an Atlantic Coast Conference contender.

“I think some of our guys will try to go to the combine, will declare and not hire an agent, and see how they play in the combine,” Williams said. “And I have no problem with that. If I were the father of some of players, I would get them to do the same thing.”

Williams said he is also considering whether to have offseason surgery on both knees that could include knee replacement — a procedure recently performed on Hall of Fame coach Mike Krzyzewski at rival Duke — to deal with a “bone-on-bone” condition ahead of next season.

“If I have to walk out on the court and they set a chair down on the court for me to coach out of a chair, I ain’t doing that,” Williams said. “I’ve got to be able to move around.”