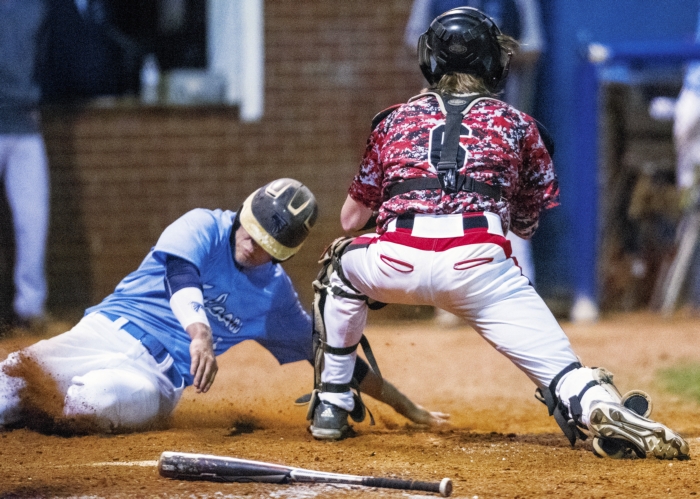 MOUNT ULLA — Redemption stories are always one at-bat away in baseball, and West Rowan’s Brett Graham redeemed himself with the run-scoring single that beat South Rowan, 6-5, on Wednesday.
Graham’s two-out error at shortstop on a tough chopper allowed South to tie the South Piedmont Conference game in the top of the sixth inning, but Graham didn’t let that miscue beat him.
“We talk a lot about keeping our heads up when we make a mistake,” Graham said. “We had one very bad inning, but then we showed some guts and still won the game.”
The victory kept West (15-3, 10-2) even with Carson in the heated SPC race. East Rowan also won to stay one game behind the Falcons and Cougars. West plays at Carson on Friday while East visits Hickory Ridge.
It was a game West pitcher Austin Love, who has 26 strikeouts in his last two starts, completely dominated for five innings.
The Falcons also gave Love run support. Caleb Link singled home a run in the second against South hurler Walker Joyce. Then when the Raiders made back-to-back defensive mistakes, the aggressive Falcons took advantage and pushed their lead to 3-0.
Leading off the third inning for West, Brandon Walton crushed his fourth homer of the season.
Then Walton’s crisp single to right set up the Trevor Atwood sac fly that plated Kacey Otto for a 5-0 lead in the fifth.
“That dude on the mound was throwing the ball well, and as many runs as we were down, it didn’t look good,” South center fielder Tyler Rary said. “But we’re always going to fight to the end. And the way things turned out, we had our shots to win it.”
In the first four innings, South (10-7, 6-6) had 12 strikeouts and one hit against Love. That hit was by Rary, a clean shot to center in the fourth.
But Dillon Norton worked a walk to start the sixth, the first free pass Love issued. Dawson Larrimore whacked a single, Rary drew a walk to fill the bases with none out, and then Bo Corriher singled through the left side to make it a 5-1 ballgame.
Blake Johnson was next, and his hopper right back to Love had easy 1-2-3 double play written all over it — but Love’s throw home sailed high and headed for the backstop. That made it 5-2, the bases were still full, and South fans, awed into silence by Love for a long time, started making noise.
“It just shows what can happen if you don’t strike out and put balls in play,” South coach Thad Chrismon said. “We were up against one of the toughest pitchers in 0ur league, but if you put in play there are a lot of things that can happen.”
After a mound visit, Love regained his composure. He struck out Joyce before a run-scoring grounder that Graham charged and made a good play on. That made it 5-3, with runners at second and third.
Next came another chopper, and again Graham charged. But this ball stayed down, catching him in between hops. He couldn’t make the play, and two Raiders scored to tie the game.
Love finally ended that disastrous inning with his 14th strikeout. That was his last pitch.
“That’s just baseball,” West right fielder Lee Poteat said. “Austin was pitching great, but then a few walks and a few mistakes, and it’s a tie ballgame.”
Joyce, who battled all night, even when it looked hopeless, got the first two outs easily in the bottom of the sixth. Then he made a great pitch to Lee Poteat. Poteat had an ugly swing, nudging a little dribbler up the first-base line. But Poteat, a wrestler and football player, leads off for West for a reason. He can fly.
“I saw that ball rolling toward first, I took off running, and my goal was to catch up with the ball,” Poteat said.
Poteat not only caught up with the ball, he ran by it. He was safe at first on a close play to extend the inning.
Everyone in the park knew Poteat would try to swipe second, but South couldn’t stop him from doing it.
That steal put Poteat in scoring position, and he was sprinting for home even before Graham’s hard-hit single to right cleared the infield. The throw to the plate from Norton, a pitcher, was accurate and reached catcher Shaggy Wyatt a split-second before a sliding Poteat arrived at the plate.
“The ball did beat me there,” Poteat said. “But I was able to slide around the tag. It was just a lucky slide.”
It would prove to be a game-winning slide by Poteat and a game-winning hit for Graham.
“Bryan came through with a really big hit for us,” West coach Seth Graham said. “But I would rather for him to have just fielded that groundball.”
Young pitcher Olen Stamper, who saved the win for Love, came through in the seventh. The Raiders went down 1-2-3.
“Stamper throws strikes,” Coach Graham said. “He’s just a sophomore. He did a great job in a tough situation.”