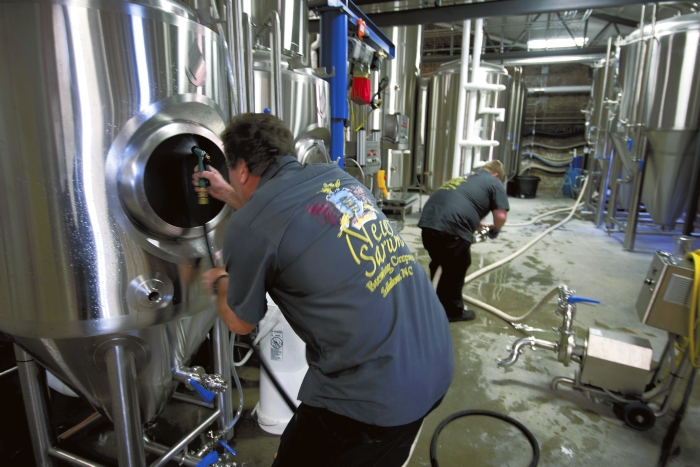 New Sarum Brewery Co. will have its grand opening on Saturday at their brewery and taproom in downtown Salisbury.

The events begin at 1 p.m. and include tours, tastings, live music, food trucks, giveaways and a live radio broadcast.

“This event is long awaited and much anticipated,” said Andy Maben, brewmaster. “Brewing beer is my passion and we can’t wait to tap this locally grown premiere brew for the good people of Salisbury-Rowan County and all craft beer enthusiasts.”

The brewery started out in an office space next to Salty Caper on Lee Street. Now the grain room alone is bigger than that space. Shining new brewing equipment will allow New Sarum to brew large batches of beer and a cold room provides storage. They will be able to self-distribute their beer in the region. It is now available at Salisbury Wine Shop and expanding.

New Sarum will offer behind-the-scenes VIP tours of the facility for $30, which will include one of their beers in a growler. The tours will be first-come, first-served starting at 2 p.m. A special Belgian-style beer, made with Apple Ugly pastries, will be offered on the VIP tour.

The taproom features vintage wood and industrial-inspired stools, while outside, visitors can look up at the grain silos while they sit at picnic tables sipping beer.

Maben is dedicated to making the beers as local and as authentic as possible. His recipes begin with a study of an individual style of beer, searching history for proved and tested methods of creating the foundation. Brewing will use as many Rowan County and North Carolina products as possible.

A special event package is available for out-of-town visitors, but only through today. It includes an overnight stay at a local hotel or B&B and includes transportation, tickets for the VIP tour, a growler and Donwtown Dollars. For more information, go to VisitSalisburyNC.com

For more information on New Sarum, visit NewSarumBrewing.com or find them on Facebook.