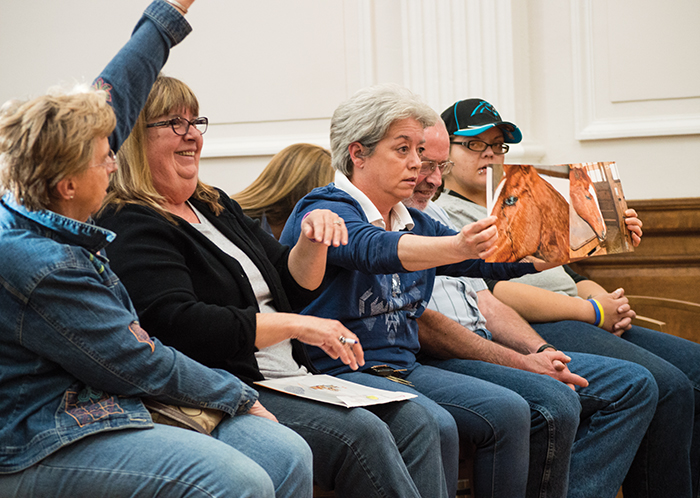 Josh Bergeron / Salisbury Post - Attendees of a public forum on Tuesday dedicated to the Rowan County Animal Shelter criticize past decisions made by county employees.

Local animal advocates on Tuesday wouldn’t let Rowan County leaders push forward with change at the animal shelter without answering for past incidents.

More than 50 people showed up to a three-hour public forum specifically dedicated to the Rowan County Animal Shelter. After an overview of recent changes at the animal shelter, a dozen or more spoke, frequently dishing out harsh criticism of past actions by county staff. Attendees frequently applauded new Animal Services Director Bob Pendergrass and offered stern advice on how to improve on past decisions by former animal shelter director Clai Martin.

The forum served as a public introduction of sorts for Pendergrass to the animal advocate community in Rowan. It also gave County Manager Aaron Church a chance to explain a significant management shuffle at the animal shelter. In the shuffle, Martin was moved from animal shelter director to oversee a newly created department called Animal Enforcement. Pendergrass was moved from supervising the Nature Center at Dan Nicholas Park to overseeing a 20-employee department called Animal Services, which includes the shelter and nature center.

At the start of the public forum, Pendergrass said he is taking the new job title as an opportunity and a challenge. Pendergrass stressed that he’s open to hearing ideas from the public and will do research to determine best practices at the animal shelter.

“So, I’m not going to stand up here and say I’ve got all these wonderful policy changes because it’s still a learning process for me,” he said.

Meeting attendees didn’t offer any criticism of Pendergrass, but provided a bounty of past anecdotes as evidence that change is needed at the shelter.

“I’ve hit redial until I had blisters on my fingers,” Bishop said.

As a “professional government entity,” Bishop said the Rowan County Animal Shelter should strive for better.

Bishop also said there’s frequently no one in the recently built cat wing. She expressed concern that cats might be stolen with no employees in the building. Her criticism of the shelter mostly focused on logistical issues.

The most contentious topic of conversation, however, was a cat named Cooper whose jaw was broken while in the care of animal control officers. Shortly after animal advocates began raising questions about the incident, nine cats were euthanized. Animal advocates have alleged the cats were killed as revenge for questions raised. Church has denied the allegation. County staff didn’t break any rules by euthanizing the cats, which were declared feral.

On Tuesday, when faced with questions about employee conduct, including euthanizing the nine cats, Church avoided answering. He said it’s against state law to talk about personnel matters.

“I cannot legally discuss personnel matters at this time,” Church would say repeatedly.

Church also said nine is below the state average for the number of cats euthanized per week.

His answers prompted audience members to repeat their questions and follow up with others about similar incidents.

Near the end of the meeting, Commissioner Craig Pierce pleaded with attendees to let county officials have time to implement improvements at the shelter.

“This is a subject that every commissioner is in tune to,” Pierce said. “We want to see it become the best county shelter possible.”

Pierce said he has “full confidence” that Pendergrass will be a good director of Animal Services.

Commissioners Chairman Greg Edds also chimed in, saying that it’s important for animal advocates to provide their input on shelter operations. He said commissioners will be better able to fund the Rowan County Animal Shelter if their goal of significant economic development is successful.