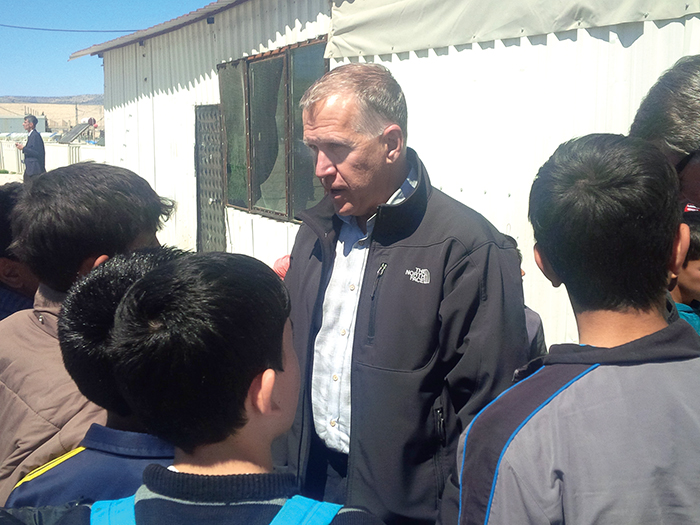 Submitted photo - U.S. Sen. Thom Tillis, R-NC, speaks to children at a refugee camp in Turkey during a recent trip to the Middle East.

Tillis was among several members of Congress who traveled to the Middle East from March 28 to April 4. The congressional delegation held meetings with officials in Israel, Saudia Arabia, Turkey and Egypt. Along the way, Tillis visited a refugee camp at the Syrian border and met with Israel’s Prime Minister Bejamin Netanyahu. Tillis spoke to the Salisbury Post about his experiences during the trip and his policy positions on issues relevant to the Middle East.

The trip provided a first-person experience that can inform policy decisions, according to Tillis.

He said leaders in the Middle East want America’s leadership “in meaningful, sustained ways and not just words” to combat terrorism.

“There’s a broad-base lack of confidence in this administration’s commitment to being there when they need it,” Tillis said about America’s allies in the Middle East. “This is a more prolonged, broader-base, meaningful engagement with these countries.”

Tillis said the leaders he met with suggested that America’s relationship “is lacking right now.”

He emphasized the effect terrorist groups such as the Islamic State are having on the Middle East, which has seen a massive, outward flow of migrants. To help stabilize the region and provide a meaningful engagement, Tillis said America needs to advise and train locals. Countries in the Middle East also need better equipment. For example, he said, Egypt needs a better modern weapons system. He mentioned Egypt’s need for more advanced weapons as as one of the things that have a heightened priority following the trip.

America’s role in stabilizing the region involves more than the military, he said. Focusing on social issues may be equally important. Young people, for example, are drawn to a radical ideology promoted by groups such as the Islamic State, Tillis said. Some are only fighting because of the paycheck, he said. It might be the only option in an economy that’s been devastated by war. He said economies in middle eastern countries are also experiencing the effects of destabilization caused by terrorist groups. A coalition that involves America, he said, needs to make radicalization a less attractive option.

He said one of the most memorable parts of the trip involved a visit to a Syrian refugee camp. He toured the camp with U2 singer Bono’s “One” Foundation.

Tillis said Turkey has handled its massive influx of refugees well. The refugee camps are like small cities, he said. There’s infrastructure and schools within the camps, Tillis said.

Tillis said providing types of aid he favors shouldn’t be considered world policing or unnecessarily intervening in foreign affairs because the locals are inviting Americans to help. World policing involves influencing a regime in locations where America isn’t wanted.

Following the trip, Tillis said Congress’ next task will be analyzing the National Defense Authorization Act for potential changes and additions. The bill specifies the budget for the Department of Defense.