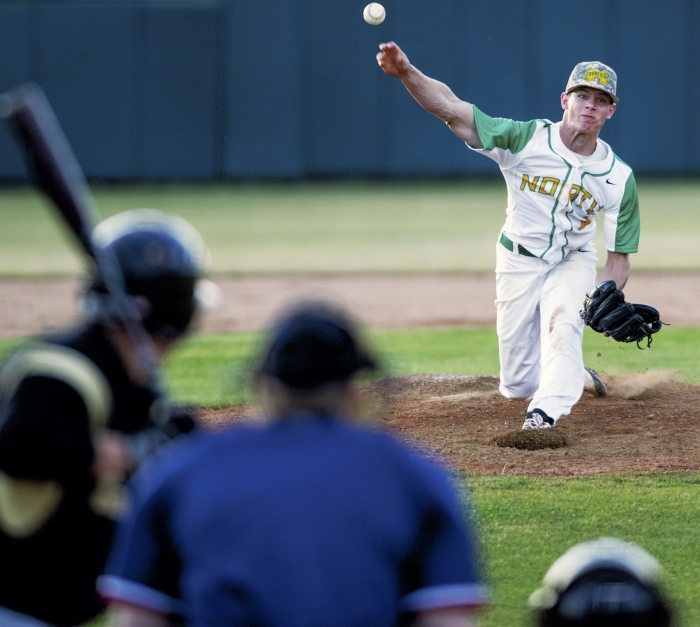 SPENCER — For the first time in his high school career, North Rowan’s talented senior right-hander Noah Gonzalez was able to finish what he started.
A four-year varsity player and a three-year pitcher, Gonzalez has always been a stuff guy, the possessor of a lively fastball and a wicked slider.
In Tuesday’s 2-1 Central Carolina Conference victory against visiting East Davidson, Gonzalez showed that he’s also a heart guy and a guts guy.
Gonzalez struck out the side in the seventh — the 5-6-7 hitters — getting two Ks on sliders diving in on the hands and one on a high fastball. This was the senior’s game, and coach Aaron Rimer gave him a chance to complete it.
“Definitely, it felt good to finish,” Gonzalez said. “Coach came out there to the mound late in the game and asked me if I remember what happened at West Davidson last week and how he had to take me out of that game. I told him I remembered quite well.”
In that game at West Davidson, Gonzalez had dominated the Green Dragons until the sixth. But then he started walking people. Rimer had to go to the bullpen. North lost the lead and eventually dropped the game, 5-4.
But this time it would’ve taken a forklift to move Gonzalez. He wasn’t going anywhere.
“My slider was my best pitch,” Gonzalez said. “I was relying on it, and it was breaking down and in to the right-handed batters.”
East Davidson had only one hit after the first inning. Gonzalez fanned 10 batters.
“Honestly, in the fifth and sixth, when they got a man on, (reliever) Lee Sells was one pitch away from coming into the game,” Rimer said. “But Gonzalez never let them get two on. He won a lot of battles. He won a lot of battles on 2-2 pitches.”
While Gonzalez was most of the story, the Cavaliers played a strong defensive game. They fielded routine ground balls and they tracked down fly balls. Catcher Jake Pritchard was a wall.
East Davidson (5-9, 2-3) scored in the first on solid hits by Evan Jarrett and Luke Bayse, but that was it for the Golden Eagles.
“Gonzalez settled in after the first inning,” East Davidson coach Dan Patton. “That’s the sign of a good pitcher.”
Patton also had a good hurler on the mound — his ace, Adam Fore.
“He’s our No. 1, and he threw like it,” Patton said. “He gave us what we needed. Really proud of his effort.”
Fore had fine velocity, but the Cavaliers (9-7, 4-1) nicked him for single runs in the first and third.
“We had good at-bats early,” Rimer said.
Fore walked the first man he faced, Pritchard, but Henderson Lentz bounced to shortstop, and the Eagles were able to force Pritchard. Lentz, a 6-foot-3 basketball player, runs very well, and his steal of second put him in position to score on Holden Lanier’s two-out single to right. That made it 1-all.
“We came out tonight, and it was kind of quiet, and we just couldn’t match the level of intensity that we had when we beat West Davidson on Friday,” Lentz said. “But you just have to grind through the tough games and find a way. That’s what we did.”
Lentz also scored the decisive run for the Cavaliers in the third inning. He smacked a one-out double. Then Robbie Monroe traded places with Lentz with his own double.
“He kept pitching me away, so that’s what I was looking for,” Monroe said. “I got an outside pitch and I went with it to right field to get Henderson home.”
North had base runners in five innings, but Fore wouldn’t let the Cavaliers to expand their lead.
That put the pressure on Gonzalez, but he was up to the challenge.
“Watching Noah from center field, it was amazing how much his ball was breaking, and he’s always got the cheddar (fastball),” Lentz said.
“Noah pretty much dominated,” Monroe added. “You could see the confidence in him.”
Rimer would like to have seen the Cavaliers score more, but he gave Fore credit.
“Normally we don’t just stand there and take as many pitches as we did, but that guy they had on the mound was good, and a lot of times we couldn’t pull the trigger,” Rimer said.
The win kept the Cavaliers in the CCC race, along with West Davidson (4-1) and Salisbury (5-0), which clobbered Thomasville, 12-0. Salisbury’s last two series will be against West Davidson and North.
•••
NOTES: Lentz is batting .364, while Monroe is hitting .400 with a team-leading 15 RBIs. … North plays at East Davidson on Friday.