Channeling George: Bull will be playing role of his life 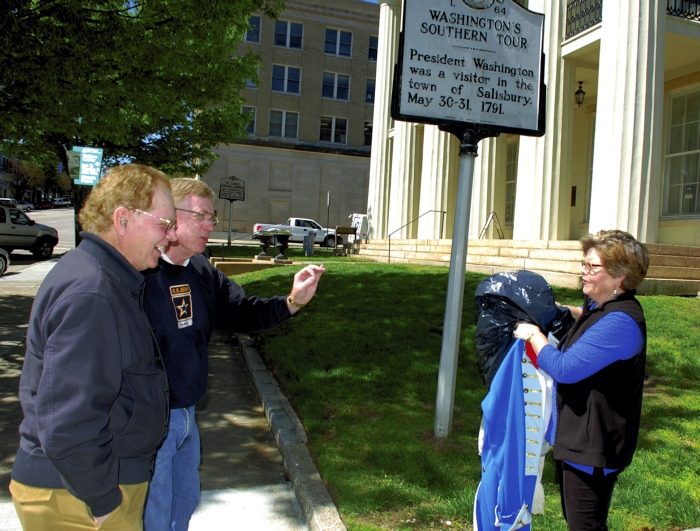 Betsy Cunningham attempts at persuading Lynn Bull, left, to try on an early-American costume during Bull's recent visit to Salisbury. Randy Lassiter, middle, is in on the exchange. Bull will be playing the role of George Washington during Salisbury's 225th anniversary celebration of the president's visit in May. Mark Wineka/Salisbury Post

That’s Washington, as in George Washington, the first president, the father of our country.

Washington could have been king, Bull will tell you.

“He put the country ahead of himself,” he says.

Bull, a Goldsboro resident, will play the role of Washington May 21 when the Rowan Museum holds a daylong celebration of the 225th anniversary of the president’s visit to Salisbury.

Washington came here May 30, 1791, and spoke briefly to the delegation and large crowd greeting him. He attended a ladies’ tea and a ball in his honor that night before sleeping in a Salisbury hotel and leaving early the next morning, heading for Salem.

Over recent weeks, Bull has been reading volumes about the president’s Southern Tour. He also has been memorizing the speech Washington made in Salisbury and preparing his answers for the questions the president received at the ladies’ tea.

A retired history teacher, Bull recently visited Mount Vernon, Washington’s home in Virginia, and he also will be going back there in coming weeks as part of re-enactors on the historical site’s front lawn. Interestingly, Bull will be part of a British camp.

Last week, Bull and his wife, Sharon, traveled to Salisbury just to get the lay of the land in advance of May 21. They were met and shown around town by co-chairmen of the anniversary event, Randy Lassiter and Betsy Cunningham.

Much like Douglas Southall Freeman, the Pulitzer Prize-winning historian, Bull has an intense, scholarly interest in both Washington and Civil War Confederate Gen. Robert E. Lee.

Sharon Bull says her husband is especially known in the history and re-enactment community as an expert in tailoring, leather goods and tents. He has tailored, for example, the black coat and other clothes he will be wearing as George Washington in Salisbury.

He’ll carry a small sword, as Washington often did. “He will have made my clothes, too,” Sharon says.

For the 1984 television mini-series “George Washington,” starring Barry Bostwick, Bull constructed the marquees (large tents with open sides) appropriate to the Revolutionary War period, and he used original marquees at Valley Forge (Pa.) and in the Smithsonian Museum in Washington as his models.

“These tents are big, they’re as big as this room,” Bull said Friday while sitting in the spacious Daughters of the American Revolution room at Rowan Museum.

Bull also instructed actors in the mini-series on the correct way to shoot artillery.

His re-enactment gigs have taken him to important anniversary events in France in 1983 and England in 1985. He was involved in the Civil War movie related to the Battle of Gettysburg, “Gods and Generals.”

Last year, when the Lincoln funeral train was at the N.C. Transportation Museum, Bull played the role of Albert Hale, a Springfield, Ill., friend of President Abraham Lincoln. He also has filled more general re-enactment roles as a surgeon at Harper House and a commander at Fort Fisher.

Bull has been part of 18th century Naval battles, the War of 1812 and the Mexican War. “And pirates,” Sharon reminds him.

During his many re-enactment travels and duties, Bull became fast friends with Salisburians Luther Sowers and Mickey Black.

He just seemed like a natural to play Washington, and it was a friend in the 28th N.C. Regiment re-enactors, during the 150th anniversary at Bennett Place, who asked whether he could give the folks in Salisbury Bull’s name.

“The next thing I know, I was George Washington,” Bull says.

The real George stood about 6 feet, 2 inches ,which is a bit taller than Bull. When he visited Salisbury, real George was 59. Bull is 69.

Real George didn’t like to wear the powdered wigs of the day, though Bull probably will be wearing one May 21.

“He was very conscious of his own self image,” Bull says of Washington, who depended on reading glasses but made it a point to shun them as much as possible in public.

Washington would go back and edit his own letters, for posterity’s sake and so history would treat him kinder, and Bull says Washington destroyed some personal letters he had written to Martha, his wife.

Bull says the president enjoyed the social company of men and women. He didn’t like to be touched and had a dignified, reserved manner about him, though he was quite good at looking after the people who soldiered or worked for him.

It was King George III of England who paid Washington a great compliment and said the American general could have been king of the new country, had he wanted.

The Washington that Bull is trying to portray, as far as his physical look, is much like the Washington portrait first lady Dolley Madison saved when British troops invaded the White House and set it afire in 1814.

Despite his adversity to wigs, Washington was carrying 12 boxes of wig powder on his Southern Tour and he happened to leave one of the boxes behind in Salisbury. Bull says that powder was used by women in Salisbury for years.

Before he became a high school history teacher, Bull served in the U.S. Army, became an optician and was once a program coordinator for the Bentonville Battlefield in Four Oaks. He met Sharon for the first time when both were part of a Civil War re-enactment.

Bull says he always considered himself shy, until teaching high school and becoming involved in re-enactments brought out another side of him.

Can he pull off the role of his life — George Washington?

“I’m looking forward to it, I really am,” he says. “… I don’t think you can top George Washington.”

Freedom, the eaglet, moves to a foster home