Freedom, the eaglet, moves to a foster home 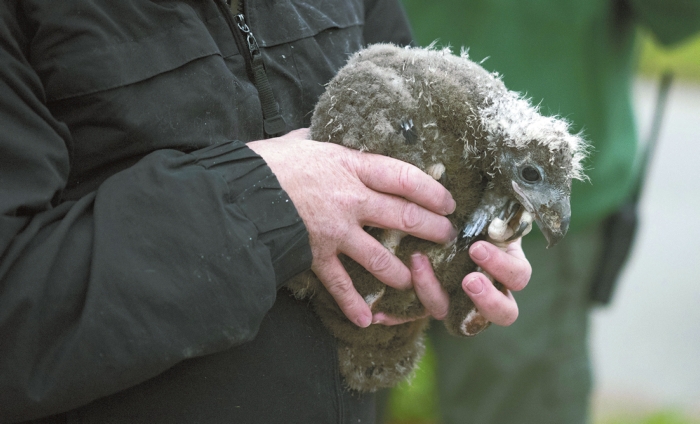 Bob Pendergrass holds the young bald eagle eaglet that was removed from the habitat at Rowan Wildlife Adventures on Monday morning. The eaglet was turned over to the care of Carolina Raptor Center officials who will place the eaglet in an environment where it can be raised to maturity and eventually released into the wild. Jon C. Lakey/Salisbury Post

Freedom is not the prettiest bird these days, but give him time. If things go as planned, this young bald eagle will someday be flying majestically overhead as one of God’s creatures and the enduring symbol of a great country.

Rowan County Animal Services Director Bob Pendergrass took less than five minutes Monday morning in securing Freedom from his parents’ nest at Dan Nicholas Park and preparing him for the transfer to folks from the Carolina Raptor Center in Huntersville.

After many years of frustration, Liberty and Justice, the American bald eagles at Dan Nicholas Park, finally hatched an eaglet this spring. Accordingly, Freedom was judged old enough to be moved to the Raptor Center where he was successfully placed later Monday with foster bald eagle parents, Derek and Savannah.

Those two were sitting on infertile eggs (in a nest out of view of the public), and the eggs were removed when Freedom was substituted in, as if they had hatched him. “Basically, the switch has been thrown in their heads, and these guys think they have a new baby that belongs to them,” Pendergrass said.

“They do have many years of experience in raising young, so my personal feeling is that everything is as good as we could expect.” Freedom should be with these foster parents about four weeks before moving to a “hack tower,” where he (or she) will start learning the process of flying and, later, hunting in the wild.

It takes bald eagles about five years to reach sexual maturity and gain their distinctive white heads and tail feathers. By then, Freedom will hardly be an ugly duckling.