The Dart: If Noah only knew the work Grandpa put into his house 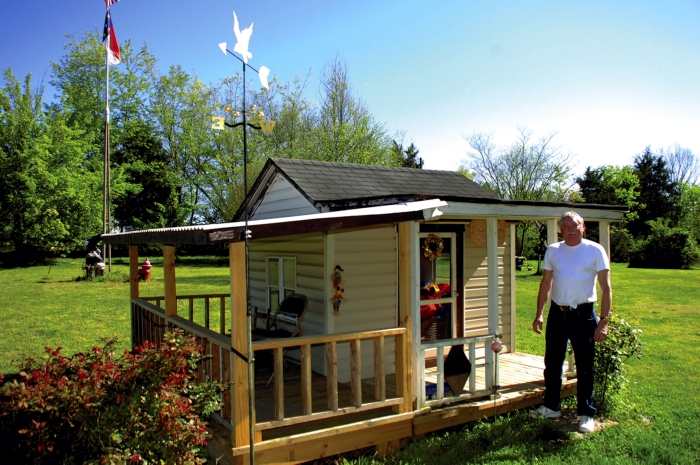 Mark Wineka/Salisbury Post Rick Miller stands by the children's playhouse that once had been a favorite place for his kids and now, he hopes, will be a hangout for his grandchildren, including 2-year-old Noah.

ROCKWELL — His kids were still toddlers when Rick Miller, while driving back and forth to work, noticed the little house in a yard along N.C. 152 near Bostian Heights.

Miller imagined it might make a great playhouse for his children. Surely, that had been its purpose in the past, though it was obviously long neglected.

One day, Miller stopped and asked the owner whether he could buy the tiny house from him. The owner agreed. Miller can’t remember what he paid for it — maybe $100, he guesses — and he set about assembling the jacks, cement blocks and trailer he would need.

The playhouse had wooden siding that looked as though it had been painted at least six times. Miller put on some vinyl siding, replaced the roof and made the playhouse much more weather-tight by trading out its windows with some salvaged from a mobile home.

He also constructed a front porch, and the playhouse resembled any number of quaint country cottages you can still find in Rowan County.

For years Miller’s oldest daughter, Sarah, and twins, Joe and Rachel, had their own little getaway in the front side yard of the Miller home off Emanuel Church Road.

If you drive down the road today, you can’t help but be like Miller was almost three decades ago when he first spied the miniature house. Miller again has brought it back to life — this time for his 2-year-old grandson, Noah.

Miller has added a new side porch, which faces Emanuel Church Road, and everything inside and out is ready for grandchildren, down to the freshly painted weathervane, a wreath on the screen door, the rose bushes, the toys and furniture inside and the special sign out front that says, “Noah’s House.”

“I wish I could tell you how old it is,” Miller said. “Lord knows, it’s as old as some of the old houses around here.”

The new side porch on the playhouse, is wide enough for adults to pull up a chair and watch the world go by on Emanuel Church Road.

“When the boss says screen it in, I probably will,” Rick says, referring to his wife, Debbie.

This part of the world has pretty much always been Rick Miller’s playground. He grew up in his dad’s house next door, and he commuted from here for more than 41 years to his job at the Marshall Steam Station.

It was about an hour’s drive one way.

Debbie and Rick Miller’s home has beautiful maple trees out front and much bigger pecan trees in the back.

He claims, somewhat sheepishly, to have several “junk buildings” in the back full of stuff he just wants to keep.

There’s also what Rick calls a Volkswagen “boneyard” in back, remnants of all the old Volkswagens son Joe used to rely on for parts.

No far from “Noah’s House” and in full view of passersby on Emanuel Church Road stands a flagpole Miller put up himself about 15 years ago. “That’s another story,” Miller says.

The pole was erected in two sections, and he built his own scaffolding to help him install the top portion. Miller knows the base is secure because he poured eight 80-pound bags of cement and rebar into the anchoring hole.

Miller had the two sections of pole machined in a way that the top could be screwed on to the bottom section. It was a job requiring more than one person, but again Miller tried to do it himself.

He acknowledges there was a touch-and-go moment when he feared he wouldn’t be able to hold the top section upright while he stood on the scaffolding and screwed it on.

Miller pictured it falling into the power lines near the road and his having to jump off as it fell over.

“I did say a prayer before I did it,” Miller says, describing the miracle installation.

Today, 3- by 5-foot U.S. and N.C. flags fly from the pole. Though Miller doesn’t have one now, he has flown a POW/MIA flag in support of veterans in the past.

“I’m not a veteran, but I’m proud of the veterans and what they did,” Miller says.

He also has eagles at bottom of flagpole, and a old fire hydrant for decoration

Back in January after some icy weather, Miller slipped on the front steps of his home and injured his knee. He’s facing some arthroscopic surgery, but it hasn’t kept him from doing things around the yard.

He recently replaced some landscaping timbers around the maples with pavers, which were a lot heavier than he anticipated, he confesses.

Daughter Sarah is 30 now, and the twins are 28, so that gives you an idea of how long the Millers’ handsome playhouse has been sitting in the yard. Rick Miller can’t wait for young Noah to visit and see the new side porch.

Spring is Miller’s favorite season. It’s a time for looking forward, he says.

And speaking of looking forward, the Millers have a new granddaughter — Isabella. No doubt she’ll be spending time in Noah’s House, too.