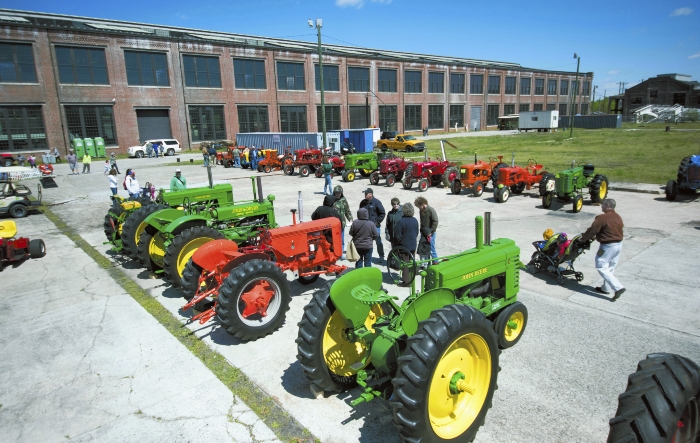 SPENCER — Ed Roy made a wonderful little discovery in 2005 when his mother died and he cleaned out her attic. He found a childhood toy — an orange Allis-Chalmers tractor he used to play with that had been “lost” for decades.

The Concord resident brought his mint-condition toy as part of his collection of Allis-Chalmers tractors, many of which he’s restored. This is the 10th year Roy has participated in the Antique Tractor and Train show at the N.C. Transportation Museum.

Some of his pedal tractor toys are reproductions, but many are the “real deal.” Roy has traveled as far as Minnesota to add to his Allis-Chalmers collection. He’s also participated in antique tractor shows in Minnesota, Tennessee, Ohio and Florida.

What he loves about these shows is being able to talk with people who have some history with an antique tractor.

He likes listening to the older folks who reminisce about their memories and interactions with the tractors. The 68-year-old grew up on a dairy farm and recalled when he and his father used an Allis-Chalmers tractor on the farm. He still has his father’s tractor, which he and his son restore and painted.

“I mowed many an acre of hay with that tractor,” he said.

He’s restored 13 tractors, some of which he hauls to and from shows.

Robert “Lee” Young, 10, attended the show with his father, Robbie and grandfather.

“I like them all,” Lee said when asked which tractor was his favorite, although he ‘fessed up to preferring John Deere.

The Young family has a farm in Churchland and are no strangers to tractors.

Robbie said it’s great to attend tractor shows like the one at the Transportation Museum and meet the people who “keep all of this old stuff going.”

He’s restored a 1947 Cub, but is too busy farming to display it at a tractor show.

Amanda Richardson of Winston-Salem brought her son, Austin, to the tractor show for the first time. The family says the 2-year-old loves John Deere tractors.

“He’s having a ball,” Richardson said. “Everybody is so friendly and have let him get on them.”