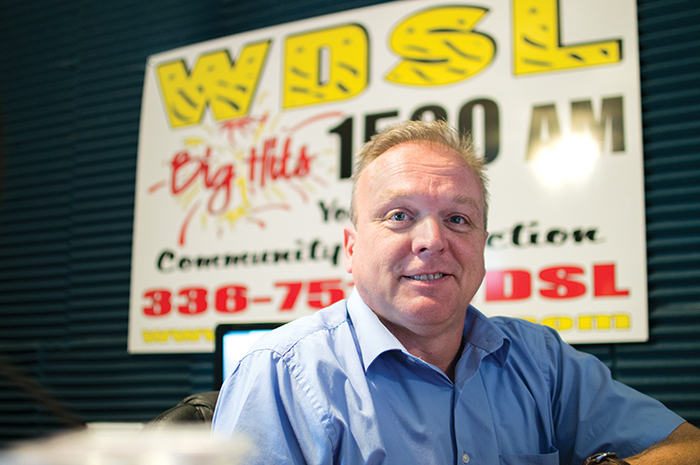 Josh Bergeron / Salisbury Post - Mocksville radio station owner Farren K. Shoaf is running as a Republican for the 13th Congressional District seat. He is one of 17 Republicans running for the spot.

MOCKSVILLE — Radio station owner and congressional candidate Farren Shoaf says he’s “just a normal guy” that decided to run for office himself instead of complaining.

Shoaf is one of 17 Republicans running for North Carolina’s the 13th Congressional District seat. He describes himself as a constitutionalist who’s tired of business as usual in Congress.

“I am just fed up with being sold out by these career politicians in Washington, D.C.” Shoaf said. “It is just a travesty to be handing off to the next generation a lower living standard that what we’ve enjoyed.”

Instead of complaining about politicians, he decided to run for office himself. In the field of 17 Republican candidates, Shoaf says he’s got a chance. All he needs is a majority of votes. There’s no possibility of a runoff in this year’s race.

“My slogan is that I’m a citizen not a politician,” he said. “So, I decided to just try it myself because, for once in my lifetime, we’ve got a level playing field where a regular guy can actually run for Congress.”

Shoaf said he’s been self employed since turning 21. He currently owns WDSL, an AM station in Davie County, and has worked for WSIC in Statesville. Shoaf previously owned a car and truck accessory business in Iredell County for a number of years.

Shoaf, who favors term limits in Congress, said it’s important to have more small business owners participate in politics and run for elected office. He said electing more “career politicians” or attorneys won’t solve any of the nation’s problems.

When asked about policy positions that are most important to his candidacy, Shoaf said he’s “pro second amendment,” opposed to a pathway to citizenship for undocumented or illegal immigrants and in favor of Donald Trump’s border wall idea.

Shoaf said walls work. If politicians had adequately enforced laws, immigration wouldn’t be a problem in America, he said.

“A lot of our politicians live in gated communities,” he said. “Those walls work. I mean a borderless country is ridiculous. And, it’s not about race. It doesn’t matter who is coming across.”

Shoaf, however, sees the war against radical terrorists groups as one America should fight. He said a war against the radical group known as the Islamic State is “absolutely necessary.”

“For the sake of humanitarian reasons, we should defeat ISIS,” he said. “If it’s truly in our national interest, then absolutely we should do it. If it’s nation wrecking and nation building, then no.”

As a self-described “normal guy,” Shoaf said the economy is the most significant issue in the 13th District.

“This kicking the can down the road economically is unacceptable,” he said.

The blame for economic problems, Shoaf said, rests on the shoulders of both Republicans and Democrats.

“Small business is the backbone of our economy and so often we throw the wet blanket on it,” he said. “We’ve got to return manufacturing to our country.”