A man called ‘Cigar:’ Holshouser has always been built for speed 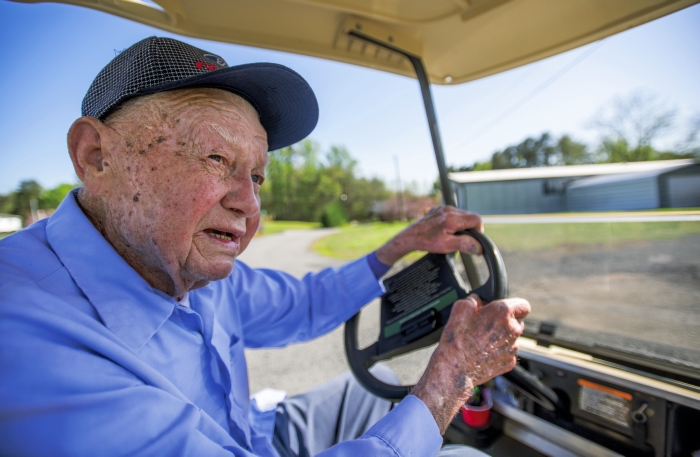 ALLISON LEE ISLEY/SALISBURY POST Glenn Robert Holshouser, better known locally as Cigar, is a U.S. Navy Veteran, who owns the Cigar Hill Mobile Home Park in Rockwell. Cigar enjoys watching NASCAR and claims to be a "Ford man." He loves being outside and can often be found sitting in his golf cart watching the cars go by.

He lives in a tidy doublewide at the end of Cigar Avenue, just outside the town limits. These few acres, where he owns a small mobile home park, also are known as Cigar Hill.

“Everything around here is ‘Cigar,'” he says.

On nice days, when Cigar is going stir crazy back at his place, he manages to walk outside, climb into his golf cart and drive up to the end of Cigar Avenue and just sit there, watching the cars on N.C. 152 go by.

A man named Cigar on Cigar Avenue on Cigar Hill.

He chews his wad of tobacco and waves sometimes. It beats watching television.

A highway patrolman named this area Cigar Hill long ago, because it’s where a youthful Cigar, in one of his ’40s model Fords, would race down the road. Cigar has always been a Ford man built for speed.

For the record, Cigar’s real name is Glenn Robert Holshouser. And no, he has never smoked a cigar, though he has chewed tobacco — Red Man is his long-favored brand — since he was 8 or 9.

Cigar has pretty strict rules for his trailer park, one of the quietest you’ll find. No more than two people living in a mobile home. No pets. A maximum of two vehicles. Take care of the place. And pay your rent, of course.

Some tenants have stayed with him for a long time.

Cigar faced open-heart surgery in 2010, when his doctor replaced a stubborn main valve with a cow valve.

Cigar’s most recent physical problem has been his back. It hurts, and it affects his legs enough that he relies on a walker. The pain and limiting mobility frustrate him, because he loved working outside.

“I need an operation,” he says, “but they say I’m too old. They’re trying to patch me up as good as they can.”

Laura Delaney checks on Cigar and keeps him company Monday through Friday. Niece Marlene Mills also stops in a lot. Cigar has many nieces and nephews in his extended family, which is important since the death of his second wife, Frankie, almost five years ago.

Marlene and her late mother, Willie, are the only members of the family who would call Cigar “Glenn Robert.”

Marlene doesn’t say “Glenn Robert” in a scolding fashion, though Cigar likes you to think there was much to scold him about over the years.

Glenn Robert Holshouser was the sixth of seven children belonging to Paul and Beulah Holshouser. His dad worked for the Rockwell Casket Co, and his mom tended to all the children at home.

Holshouser’s grandparents once owned 250 acres in this area of Rockwell. Their four children divided it up, then Cigar and his siblings split it up again. “I got this section,” Cigar says.

The family farm had a cotton patch, corn patch and vegetable garden. The Holshousers had chickens, like most folks did, and they raised pigs. Hog killings were regular events, and the family had a nice smokehouse for hanging the hams.

Cigar did not enjoy picking cotton and wearing a tie-sack around his neck. As a 10-year-old, when he complained to his mother that picking cotton hurt his back, she delivered the perfect parental rebuttal:

“You ain’t old enough to have a back yet,” she said.

Working that cotton patch is how Cigar and his brothers and sisters were able to afford school clothes for the winter.

Cigar actually owes his nickname to an older brother. When he was 10 or 11, the brother was hanging out with some friends, and they were passing around a cigar.

“When they got caught, my brother was the one smoking,” Cigar says.

The brother became known as “Big Cigar” and for a time, Glenn Robert was “Little Cigar.” People eventually forgot the “Little” part of the nickname.

Cigar never liked school much. Eighteen days before his 18th birthday, he joined the Navy, serving from 1946-48 and missing World War II.

His oldest brother, David, was killed in Belgium in 1945 near the war’s end when Germans ambushed his company. David had a 1940 Ford — “the fastest thing around,” Cigar says — and when Cigar was 16 his father gave in and allowed him to drive the car on a date.

During his Navy stint, Cigar was stationed mostly on a light cruiser, which made its way along many coastlines of Europe. Cigar took advantage of shore leave to see as many countries and sites as possible, including the gravesite of his brother.

Cigar says his Navy hitch and its associated travels combined to be the best experience he ever had. “I got more education than I ever did in school.”

Back home, Cigar would become a favorite target of a highway patrolman named Anthony, who liked to sit near Organ Church Road and wait for Cigar and his friends to leave the pool room in Rockwell.

“We’d race down this hill,” Cigar said, and Anthony started calling that part of the road “Cigar Hill.”

“He was after me all the time.”

Cigar figured out later why the trooper had it out for him. A pair of girls who worked at the casket company often would stop in at the service station where Cigar worked on their way home to their boardinghouse.

One night, Anthony turned his patrol car around and followed Cigar all the way to Powles Funeral Home before stopping him. “He was dating one of them girls, and he thought I was messing with them,” Cigar says.

Cigar had joined the Naval Reserve after 1948, and he was called back into service in 1951 when the United States became involved in Korea. He was sent to Orange, Texas, then to Newport, R.I., for training on a minesweeper.

He got lucky and was sent home after 18 months before having to ship out for Korea.

Cigar held several jobs in his day. He worked briefly at the Alcoa plant in Badin and for an Esso station in Rockwell. In 1952, he started a 19-year stint with City Motor Co. in Salisbury. He was a mechanic, mainly a front-end alignment and brakes man who also serviced new cars.

He left the Salisbury Ford dealership in 1971 to work for Cale Yarborough Car Care in Charlotte. He and a friend later opened S&H Tire on South Main Street in Salisbury before the partnership dissolved and Cigar found himself working at the Swink textile plant off U.S. 29.

Cigar got back into cars by working briefly for Wagoner Chevrolet in China Grove. From 1982 until his retirement in 1993, Cigar worked for the city of Salisbury’s garage off Franklin Street.

He and Frankie came back to live at Cigar Hill in 1994 and use the trailer park to supplement their income.

“I used to go to both places, one on Friday nights, one on Saturday nights.”

Cigar Holshouser went through a short spell, around 1959-60, when he raced cars, too,. He often drove at Hickory when the speedway was still a dirt track. Ken Kluttz built him a car, and he and another local driver, Harold Byrd, would go to Hickory together.

Cigar has loved NASCAR racing from its beginnings and spent numerous Labor Days attending races at the Darlington, S.C., track.

Cigar is the first to tell you he probably had a drinking problem when he was younger, but he hasn’t had a drink since March 1, 1982, the day Frankie also stopped smoking for good.

This March, Marlene managed to find an excuse for getting Cigar over to her house on Holshouser Road and surprising him with an 88th birthday, attended by all those nieces, nephews and friends.

Cigar had never had a birthday party,

“The best thing I enjoyed for a long time,” he says.

Maybe even better than running a fast car down Cigar Hill.