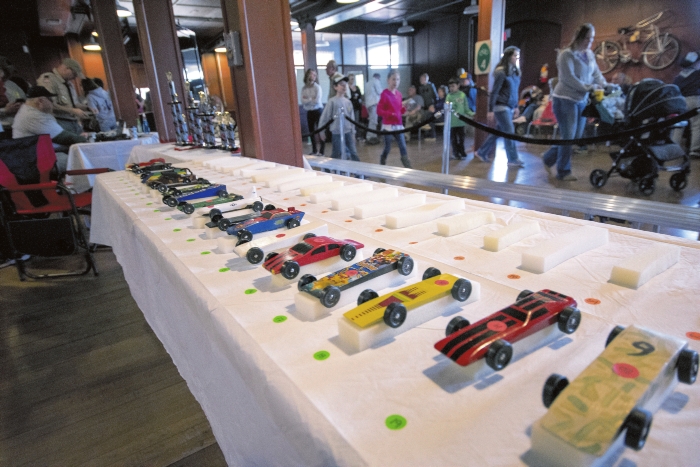 SPENCER — Seth Warren carefully placed his blue and red “Superman” inspired wooden car on the aluminum track. He would later excitedly announce he won first place in his particular heat. The 10-year-old Cub Scout isn’t a stranger to the District Pinewood Derby races, but he had just as much enthusiasm as if for the first time.

Seth was one of 21 Cub Scouts from the Sapona District, formerly the Rowan District, to enter into the competition held Saturday at the N.C. Transportation Museum. The race was open to those Tigers, Bears, Wolves and first-year Webelos who won in their pack and those who wanted to participate.

Boy Scout Pack 306 facilitated the event, said organizer Ann Barber, but the participants and volunteers were from several area packs.

The event would crown three overall winners, but there were many who walked away winners with trophies and medals.

The best part for Seth of course, he said, was getting to race his car. Seth and his father, Kevin, painted, sanded and placed the wheels on the car. Next year Seth will age out of the competition since he’ll be a second-year Webelo. This is his fourth year with the Pinewood Derby.

She was initially terrified to let Seth participate in Scouts, she said, but her husband assured her their son would be fine. Seth has high functioning autism and has central processing disorder as well as a number of life-threatening food allergies.

Rory said having to adhere to eating specific foods was really a concern, but her fears were allayed when the Scout pack made sure Seth had a specific type of hot dog while on a camping trip.

“The troop has gone out of their way to help him,” Rory said.

Scouting has helped with his socialization skills, Rory said.

Oliver Shue, 7, is the third generation in his family to be involved in Boy Scouts. His father, Mark and grandfather were all a part of Scouting. Mark is a Scout leader and his father was a Scout Master. Oliver is in his first year as a Scout.

Oliver helped his dad paint and sand his car, he said proudly. Oliver’s favorite part of Scouting is getting to go on trips — camping, the beach, and a tour of the Ronald McDonald House.

The scouts race within their pack with cars that have to weigh a certain amount and be built using a kit provided to them by the Boy Scouts organization, explained District Executive Howard Torrence.

“A big part of this is that they built the cars themselves,” Torrence said.

The event is the culmination of all of their hard work, he said.

This year, the event fell on the same day as Little League for some Scouts. In the past, the derby has had closer to 60 participants.

The Pinewood Derby takes place once a year.